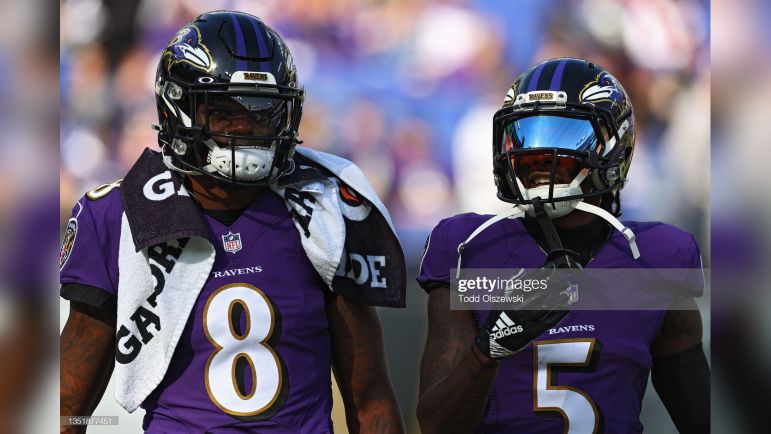 The Baltimore Ravens ended up with two first-round picks last night before all was said and done, coming away with the top safety and the top center in the class, those being Kyle Hamilton and Tyler Linderbaum, respectively.

It did come at a cost. In order to add the second pick, they traded a third-round pick and wide receiver Marquise Brown, their top starter, to the Arizona Cardinals for the 23rd overall selection. They did trade two picks back and picked up another selection in the process, but still, they hit their wide receiver depth chart hard.

It was not an idle decision, by any means, but rather one long in development. In fact, Brown was already in Arizona by the time that the trade was announced. General manager Eric DeCosta told reporters after the first round that Brown had asked to be traded at the end of the 2021 season, calling it “something I anguished over for a long time”.

Brown was the Ravens’ first-round draft pick in 2019. He became the team’s number one wide receiver during that time, catching 195 passes over the past three years for 2,361 yards and 21 touchdowns. But clearly, things were not always so smooth behind the scenes—or indeed on the field.

Lamar Jackson certainly did not seem to be happy about the move (as seen in the tweets below, the first being something he retweeted), yet DeCosta made it clear that they communicated with their quarterback about that decision in advance. “That’s something that we always do”, he said. “We had a communication with him, actually, before the trade was made, and explained the situation as best as we could”.

WHAT THE FUCKING FUCK BRO! WE TRADED AWAY HOLLYWOOD💔💔💔💔💔💔💔

It’s not about my new center🙄 stop that bs https://t.co/meRpOw4zD0

“It’s challenging for everybody”, he went on. “Our locker room is very close, which I’m proud of. Any time a teammate is potentially getting traded, it’s something that’s hard for the players to understand at times, but I think, in the end, it happens. It’s part of the business”.

Having previously waived Miles Boykin, the Ravens’ wide receiver group entering the second day of the draft now consists of 2021 first-round draft pick Rashod Bateman at the top of the depth chart, flanked by Devin Duvernay, James Proche, and Tylan Wallace, all drafted in 2020-21.

There is still a lot of talent remaining at the position, with Christian Watson, Skyy Moore, and George Pickens being the top names still available, most likely, and the Ravens will certainly be adding at least one—maybe two, considering they still have nine more draft picks, and they’ve drafted two in each of the past three drafts.

They hold pick number 45 in the second round, and they have more than enough ammunition to trade up if they want to go up and get their top remaining wide receiver on their board, stocked with a comical six draft picks in the fourth round.