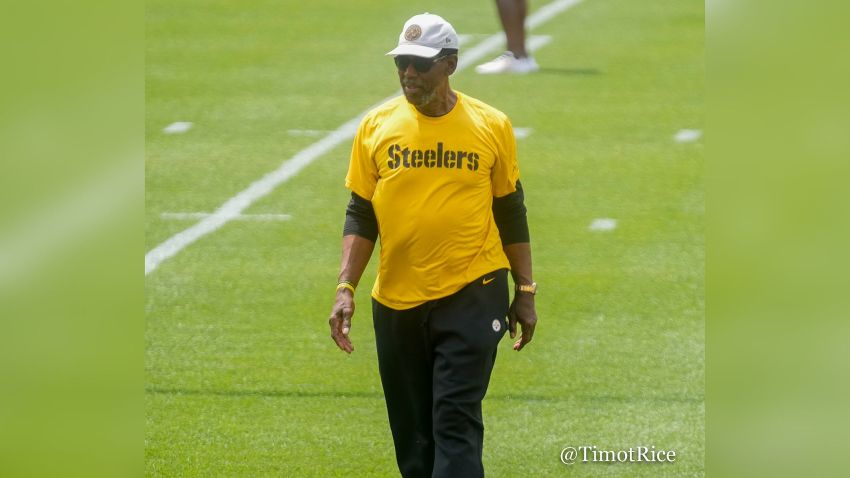 Earlier this week, we noted Alabama would honor longtime Pittsburgh Steelers’ coach John Mitchell, along with Wilbur Jackson, as they broke the school’s color barrier and became the first two black players in Crimson Tide history. That ceremony was held today with an emotional Mitchell giving a speech about what the school and then head coach Paul “Bear” Bryant” meant to him.

John Mitchell gets emotional talking about his journey as one of the first Black football players at Alabama. pic.twitter.com/9gNNSWqpj8

In part, a choked-up Mitchell said.

“From the bottom of my heart, I can’t tell you what this award means to me. Coach Bryant took an 18-year old and he turned him into a young man. I’ve said many a times before, everything professionally that happens to me was because of Coach Bryant. I don’t know what he saw in me. Or he saw some things in me I didn’t see in myself. I miss him everyday. In my 24 years coaching the Pittsburgh Steelers’ defensive line, the things that I’ve coached was the things I learned right here in Alabama.”

A plaque was made by the school to honor Mitchell and Jackson. It sits outside of Bryant-Denny-Stadium.

John Mitchell and Wilbur Jackson, the first black players at the University of Alabama, unveil their commemorative plaque at the base of Bryant-Denny Stadium before A-Day. pic.twitter.com/G8DqpTYAlg

Mitchell began his college career at JUCO Eastern Arizona before being recruited to come back home and play for Bear Bryant’s Crimson Tide team. Not only did Mitchell play, he starred, and become the team’s first black captain in history.

After a brief NFL career, he broke into coaching and returned to his alma mater as a the defensive ends coach from 1973 to 1975. He stayed in the college ranks until 1991 when he picked up his first NFL job as the Cleveland Browns’ defensive line coach. Three years later, Pittsburgh hired him and he’s been with the team ever since as the Steelers’ longest tenured coach and one of the longest tenured coaches in the NFL. He grew and developed names like Joel Steed, Casey Hampton, Brett Keisel, Aaron Smith, Cam Heyward, and so many others as part of several stellar Steelers’ defenses throughout the 90s and 2000s.

He stepped aside from his d-line coach title for the 2018 season and was replaced by Karl Dunbar. Mitchell still serves as an assistant coach and during spring OTAs and summer training camps, it’s common to see him on the field to take players through drills. He also serves as a team liaison to help players off the field, too.

Though known for his tough-love, drill sergeant nature, recalling his memories of playing at Alabama is clearly an emotional moment. The impact Bear Bryant had on him is an impact Mitchell has had on countless Steelers’ over the decades. And few are as worthy of such an honor as Mitchell.