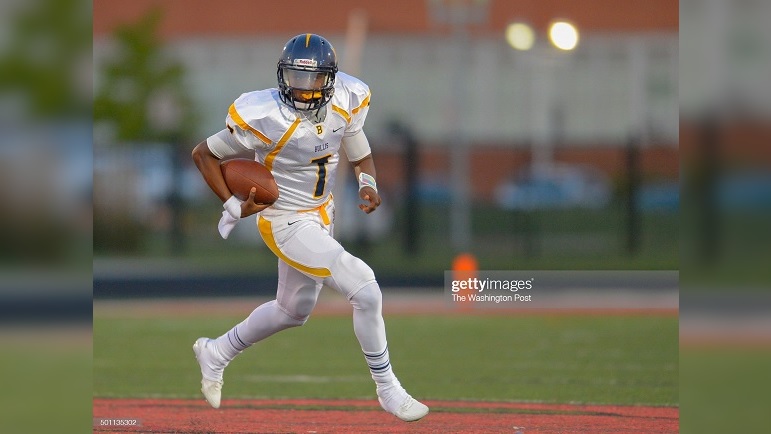 Before Dwayne Haskins dominated the Big Ten Conference during his time at Ohio State, he was a star in high school at Bullis School located in Potomac, Maryland. To commemorate the career and most importantly the life that the 24-year-old lived, the school retired the No. 7 earlier this morning.

Sports Director and Anchor for WUSA9 News Darren M. Haynes announced on Twitter that the Haskins family will hold a memorial service at Bullis School and his funeral will be in his hometown of Highland Park, New Jersey. Both of those dates are to be determined.

Dwayne Haskins #7 will be retired at Bullis High School today at 10am.

The Haskins family will also have a memorial service for Dwayne at @BullisAthletics and his funeral will be in his hometown of Highland Park, NJ. Both of those dates TBD.

According to an article written by WUSA9 News on Saturday, Haskins wasn’t just a member of the Bulldogs’ football program. He was also a sports editor for the school newspaper and was successful in the classroom. One of Haskin’s former teammates, Andres Lopez, who played running back for Bullis, recalled some memories of their time together and how exceptional Haskins was as a leader.

Coming out of high school at 6-foot-3, 198 pounds, Haskins was a four-star prospect in the 2016 recruiting class and rated as the fifth best pro-style quarterback in the country. When he initially committed to Maryland in May of 2015, Haskins told Bleacher Report in an interview that he had 41 college offers. Lopez said it became commonplace for Haskins to field calls during school hours.

“I was just in the hallway. I was like, ‘What’s up Dwayne?’ He said, ‘It’s SMU! Just got an offer. It’s a huge deal.’ Then it just started becoming a thing. It was every other class period. ‘Hey, I got to take this. It’s Maryland. It’s Michigan State.”

It’s well known that Haskins had an infectious personality and it rubbed off on everyone who came in contact with him. Joe Lee, who serves as the track and field coach at Bullis, had a bond with Haskins that went beyond athletics. Though he refused to let him run track knowing that he had a future in football, he referred to Haskins as a “tireless worker”. Lee would often talk to him about life while on visits to fast food restaurants.

If he could say three more words to Haskins, Lee said they would be “I love you, yeah, I love you.”