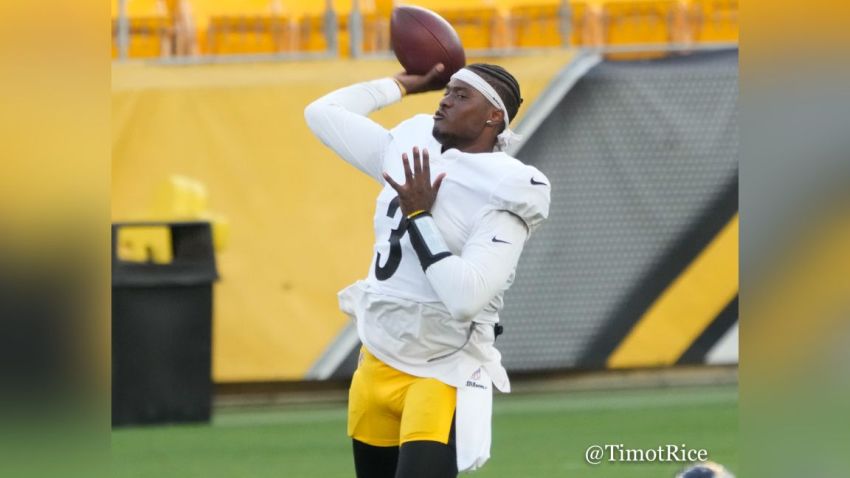 That’s what I can’t get out of my head.

Dwayne Haskins’ death Saturday morning was a shock and tragedy. What should’ve been a season of promise and hope is now one of sadness.

Details as to exactly what led to Haskins getting hit by a vehicle aren’t fully known. Right now, they don’t matter. All that matters is the loss of a teammate, friend, son, and man. At 24 years old.

Pittsburgh was perfect for Haskins. There was no pressure of being “the guy” as he was in Washington, a stint that lasted less than two years there. He donned the black and gold not as the 15th overall pick, but as Dwayne. He worked and battled and for large stretches of camp last year, looking good and making the roster as the Steelers’ #3 quarterback. At his best, Haskins flashed the tools that got him drafted. The size, the zip that wouldn’t get the football wet through a car wash, and earning genuine buzz the first two weeks of camp. It was an environment to build him up, not tear him down, and everyone saw his raw talent.

“I was just telling Coach Sulli [quarterbacks coach Mike Sullivan] the other day that his release and throwing motion mechanics are some of the prettiest I’ve ever seen,” Ben Roethlisberger said of Haskins last June. “And I told him, I wish I had that…he’s young in the league, but it’s fun to have that young energy around. And like I said, when he throws a football, it’s pretty.”

Still, some of the negativity was inescapable, and reporters continued to take shots at him for a perceived lack of worth ethic, a claim quickly refuted by his Steelers’ teammates. Pittsburgh saw him work hard enough to tender him this offseason and have him again battle for a job. All Haskins had done since coming to Pittsburgh was work. That’s the exact reason he was in South Florida in the first place. Haskins had just finished joining teammates Mitch Trubisky, Chase Claypool, Najee Harris, and many others, to squeeze in a weekend workout session and get a chance to bond with his guys.

Who knows if Haskins would ever become a starting, franchise quarterback. Truthfully, that wasn’t the expectation. But Pittsburgh was his opportunity to rebound and rebuild after two tough years in Washington, and by every indication, he was making the most of those chances. All while being a positive impact in the locker room and community. That’s shown through words of teammates and friends who knew him but through the photos captured along the way, like Pat Freiermuth sharing one of them out at what appears to be a Christmas toy drive this past winter.

His death is angry, frustrating, devastating for Steelers’ Nation, but especially to those who knew him the best. And our thoughts and prayers are with the Haskins family and his Pittsburgh teammates. The horrible but predictable slate of terrible and offensive takes, even in the very news that broke his death, makes it all the angrier.

By every account, Haskins was turning the corner. Where that would lead him – a starting job, Pittsburgh or somewhere else, a chance to settle into a backup role, something else – is anyone’s guess. But I was excited to find out. He deserved that second chance.

Dwayne Haskins was 24 with an NFL future and life shining ahead of him. He wasn’t perfect. But he was working, he was trying, taking things step-by-step to get a little better and learn along the way. That’s what life is about. Haskins was figuring that out. We all thought he had a lot more time.