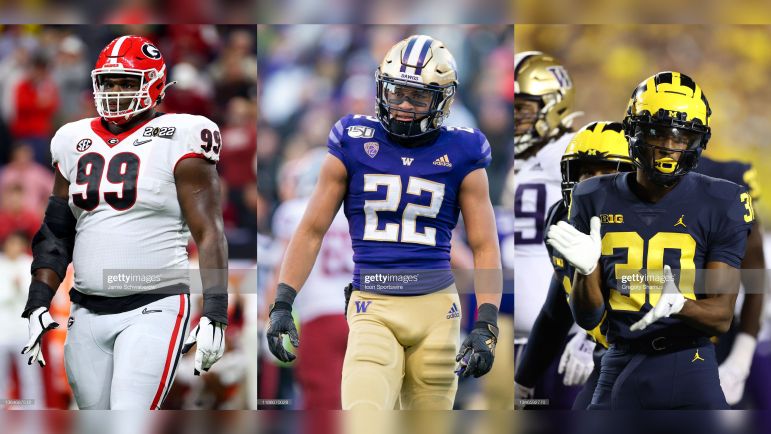 The Pittsburgh Steelers hold the 20th overall pick in the 2022 NFL Draft. They do not have a quarterback on their roster that anybody would consider a great candidate to become their next starter for the next decade who could take them to a Super Bowl. The 20th overall pick is typically not a great position to draft such a player.

Add in the fact that quarterback-needy teams tend to panic and trade up in order to get their guy, and we are looking at a very realistic scenario in which the Steelers don’t actually draft a quarterback, at least in the first round, this year. So if they don’t, where would they go?

For The Athletic, Dane Brugler offers three defensive players that the team should consider at 20 (assuming that the pick doesn’t go to a quarterback), suggesting a defensive lineman as well as a cornerback and a safety, the latter of which is currently the only starting position at which they have a clear vacancy. He writes:

A few players come to mind. Georgia nose tackle Jordan Davis will be highly coveted throughout the mid-first round, but if he were to slip to Pittsburgh, I don’t think they would pass. The Steelers’ track record of drafting cornerbacks, especially in the first few rounds, has been dismal over the last two decades, but that doesn’t mean you stop drafting the position. And if Washington’s Trent McDuffie falls to No. 20, that would be a smart selection.

Maybe more realistic than those two options, Michigan’s Dax Hill is a big-time player and would make a lot of sense at No. 20 if the Steelers don’t draft a quarterback. He is a freak athlete who can cover in the nickel, play free safety or line up at cornerback. His versatility is what teams covet for today’s NFL where he can match up versus tight ends and different types of receivers.

Both Davis and Hill are players who have certainly been connected to the Steelers in the past, though McDuffie is a less common name in this discussion. The team did retain Ahkello Witherspoon in free agency, and added Levi Wallace from the Buffalo Bills, but few would argue that they can’t upgrade their cornerback position.

With Terrell Edmunds a free agent and the Steelers having failed to sign any safety, the team clearly still needs a strong safety opposite Minkah Fitzpatrick. Hill would almost surely be a plug-and-play starter whom you adapt around.

As for Davis, he is one of multiple Georgia linemen expected to go in the first round. He is an absolute freak athlete for his size—yet one does wonder for how many snaps they could realistically keep him on the field, a factor one must consider with a first-round investment.