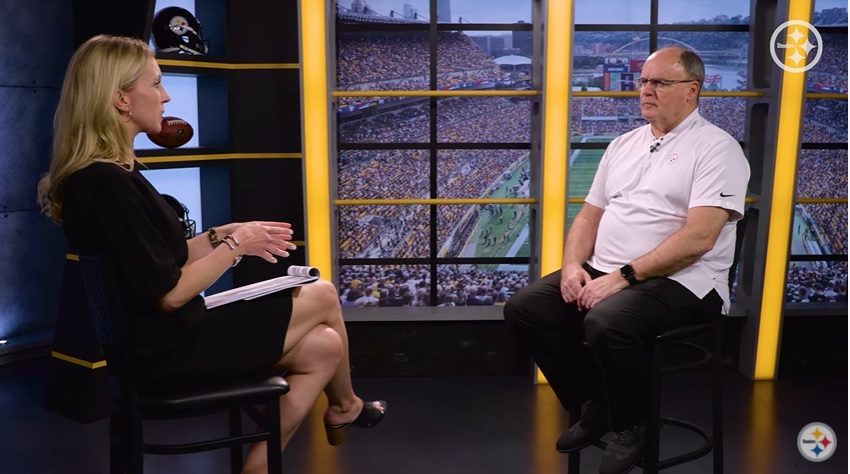 This offseason, perhaps more than any other in recent memory for the Steelers, saw them add several higher-profile names such as linebacker Myles Jack, offensive linemen James Daniels and Mason Cole, quarterback Mitch Trubisky, and recently, homegrown safety Terrell Edmunds. While the offensive line composition still seems up in the air, namely what to do with center/guard Kendrick Green in year two, the team likely has their 22 starters, at least on paper.

The NFL Draft, which begins Thursday evening, is the annual chance for each of the 32 teams to replenish their rosters and fill in trouble areas. The Steelers’ war room, led by coach Mike Tomlin and GM Kevin Colbert, has generally stuck to their tried-and-true method of allowing the draft board to come to them, and shying away from reaching for players, instead taking a “BPA” approach. Despite all the free agency additions, many draft pundits still seem to be of the thinking that the Steelers will still target a QB early, even after the addition of Trubisky. Earlier today, Colbert sat down with Steelers team reporter Missi Matthews to discuss the upcoming draft, and he made it clear that the team will not be ruling out anything based on their free agency spendings.

“We have an idea when free agency starts, what the draft class will be like,” Colbert said, according to the Pittsburgh Steelers YouTube channel. “We don’t have the finalization because we don’t have physicals, we don’t have pro days, so on and so forth. So we’re guessing along the way, and again, everything we did in free agency, none of it will preclude going into this draft.”

Need has met value for the team many times during Colbert’s tenure. In 2004, the team needed a QB, and a future Hall of Famer fell into their laps in the form of Ben Roethlisberger. The following year, tight end was a need, and all the team did was stand pat and take the draft’s top-ranked TE in Heath Miller.

While the clock is set to expire on Colbert’s days as GM after this weekend’s draft, we cannot expect him to stray from the team’s draft strategy. It’s clear by his comments made yesterday at the team’s pre-draft press conference that the mock drafts seen everywhere this week mean absolutely nothing to the team, and haven’t for some years now. It doesn’t matter what you, I, or Mel Kiper Jr. think their first-round pick will be Thursday. It’s evident that the team will not have their hand forced, and that none of their prior moves will simply rule out a positional value on their draft board.

Steelers Not Concerned With ‘Anyone But Ourselves’ In Mocking The First Round, Colbert Says

“I just said earlier that we have 22 starting-capable players in place. It doesn’t mean we’re good enough at any one position, but we have players that have started at the NFL level for each position. So, we’ll just see what we can add to it.”