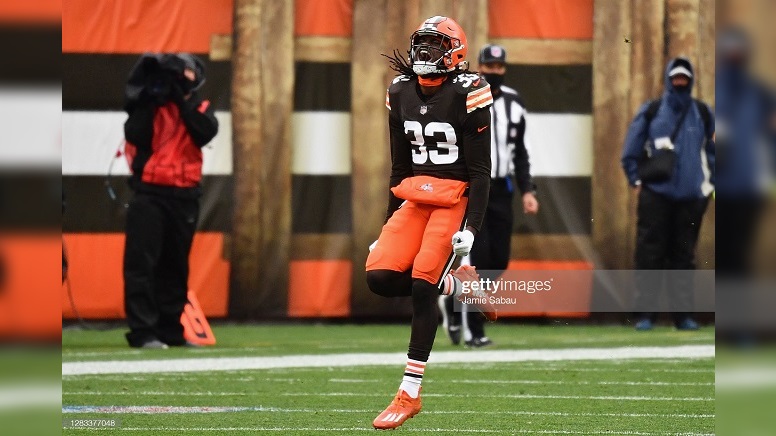 One of the Cleveland Browns’ biggest priorities in recent years has been to bolster its secondary. The organization seems to believe that it has finally hit on its lineup of the future this past year, with cornerback Greg Newsome being the final addition as a first-round pick last year. He pairs with another first-round cornerback, Denzel Ward, and Greedy Williams, with John Johnson and Grant Delpit at safety.

But depth is always important, perhaps in the secondary more than at most spots, and Ronnie Harrison is a veteran with whom they have become comfortable in recent years. Yesterday, in addition to signing quarterback Joshua Dobbs, they also re-signed Harrison to return as their third safety.

Originally a third-round draft pick by the Jacksonville Jaguars in 2018, Harrison was acquired by the Browns via trade in 2020 just before the start of the regular season, and he has spent the past two seasons there, making 18 starts during that time, largely due to injury.

He has logged 909 defensive snaps over 23 games during that time, tallying 96 tackles, including four for loss, with two sacks, two interceptions, and 10 passes defensed. He had a more impactful 2020 season, however, despite playing fewer snaps that year.

Johnson was one of the team’s prized acquisitions in free agency in 2021, coming over from the Los Angeles Rams. He started 15 games last season, recording 61 tackles, including one for loss, with three interceptions, five passes defensed, a forced fumble, and half a sack during his first year in Cleveland.

Delpit was the Browns’ second-round draft pick in 2020. He missed his entire rookie season due to injury, but was projected to be a starter at the time. Last season he played in 15 games, making seven starts, during which he tallied 66 tackles with three for loss, one interception, three passes defensed, a forced fumble, and a sack.

The return of Harrison gives them a reliable third safety in whom they already trust, and who already has a lot of experience playing in their defense. It was reportedly a one-year deal, but the numbers were not available at the time of this writing.

Meanwhile, the Pittsburgh Steelers continue to explore their options for their own starting strong safety, with their own free agent, Terrell Edmunds, remaining one of the frontrunners, evidently with Tyrann Mathieu perhaps still in the mix. Recent indications have implied that they are exploring other options as well, having reportedly gone after Kareem Jackson.