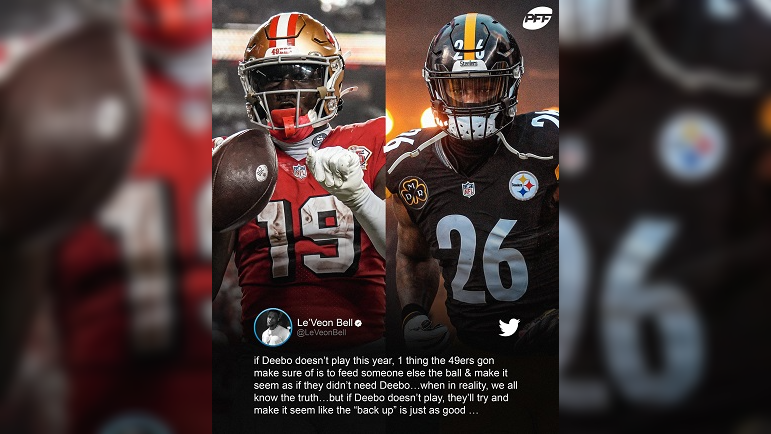 Of course, Bell had a similar situation with the Steelers, having turned down a significant contract extension offer due to wanting to be paid like a wide receiver and running back, ultimately sitting out the entire 2018 season, turning down a franchise tag and eventually leaving the Steelers for the New York Jets ahead of the 2019 season in free agency.

Since then, Bell’s career has come to a screeching halt.

Samuel’s situation isn’t about pay, but rather is hybrid usage, wanting to be a full-time receiver overall, rather than being moved around and used as a gadget guy. Despite knowing that, Bell felt the need to chime in once again, while also taking a veiled shot at former Steelers running back James Conner in the process.

It’s hard to envision how Samuel is being punished for doing too much to help the 49ers win, as Bell states. He turned into one of the best offensive players in the entire NFL last season due to his success as a receiver and a runner, and will be paid accordingly. His gripe is wanting to be a receiver, period, which has nothing to do with money or being “punished,” as Bell tries to state.

Samuel requested the trade, not the 49ers, and of course San Francisco is going to try and replace his production any way that they can. Why wouldn’t they? It has worked so well for them the last three years.

This is just another case of Le’Veon Bell being unable to understand the situation overall. He thinks he changed the game, but he didn’t. What he did do was end up opening the door for another player in James Conner, who went on to have a Pro Bowl season in 2018 with Bell watching from the couch, putting up similar numbers to Bell in that one season.

Asked what he’d do if he could do over the 2018 season and situation, Bell responded to KDKA’s Bob Pompeani, stating he would play wide receiver, which really isn’t surprising.

It’s just tone deaf once again from Bell, who will do anything he can to insert his name into a discussion about players who want paid or to be used differently.