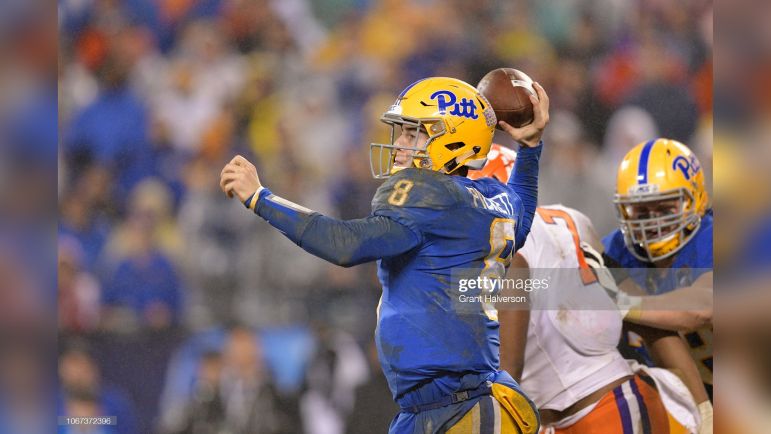 For the last four years as quarterback at the University of Pittsburgh, Kenny Pickett has familiarized himself with the blue and gold surrounding him inside Heinz Field from the banner colors, to the jerseys and apparel worn in the stands by his fans.

Now, as a member of the Pittsburgh Steelers, Pickett will have to make a slight adjustment with his color palette, changing to the black and gold of the Steelers, which will overtake Heinz Field each home game in Pickett’s Steelers’ career.

After years of running out of the Pitt tunnel and being greeted by the blue and gold of the Panthers, Pickett is looking forward to that special moment running out of the Steelers’ tunnel into a sea of black and gold on the North Shore. There’s an added comfort for Pickett knowing he’ll be playing his home games inside the friendly confines of Heinz Field for the next four to five years, at minimum, as well.

“Yeah, there’s — like you said — there’s comfort, but you know, obviously there’s a job at hand and you know, I know what I have to do and I know how to go about my business,” Pickett said to reporters Friday, according to video via the Steelers’ official YouTube page. “So I’m really excited to be here. And you know, that first game back in Heinz Field instead of being in blue and gold, it’ll be black and gold. I’m really excited for that.”

That will truly be a special moment for Pickett, one that will surely be hard to put into words for the new Steelers’ quarterback. After spending four years gracing the field at Heinz Field wearing Pitt colors and turning in a dominant 2021 season that resulted in a Heisman Trophy finalist and an ACC championship for the Panthers.

Hopefully, based on the trajectory Pickett was on in college, he finds similar success in the black and gold that he did in the blue and gold of the Panthers.

What are the @Steelers getting?