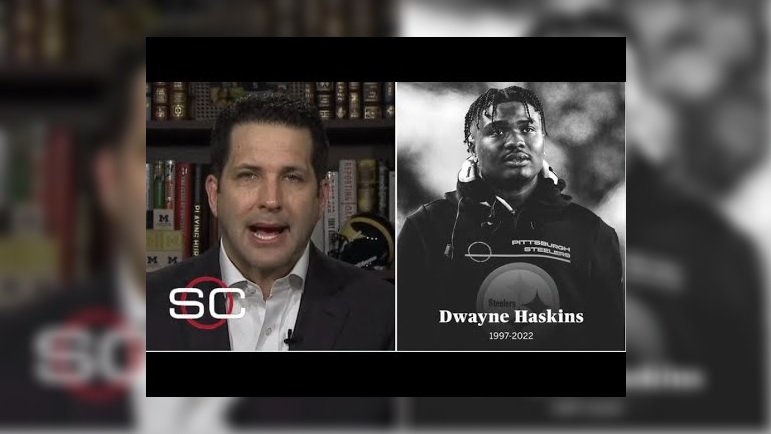 “I wanted to address the death of Dwayne Haskins and the tweet that I posted this weekend, it was insensitive,” Schefter said to begin his podcast. “It was a mistake. And I could assure you is not my intention. I wish I could have that tweet back. The focus should have been on Dwayne, who he was as a person, a husband, a friend, and so much more. I wanted to apologize to Dwayne’s family, his friends, the players in the national football league and offer my condolences to everybody close to Dwayne. And in the way I failed Saturday, I wanted to turn people’s attention to make sure that Dwayne is remembered properly after his outstanding career at Ohio State, which led him to become a first round draft pick.”

Though deleted off his timeline, here is what Schefter initially said. 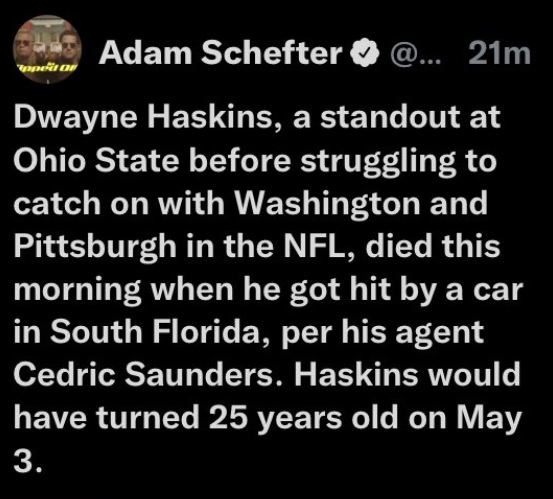 It drew backlash from the Twitter community. Though Haskins did have on-field struggles, they weren’t relevant to his death. A short time later, Schefter deleted the tweet and put up a new one. He did not make an apology until today.

Schefter went on to speak about Haskins and the career he was having in Pittsburgh. Here’s the full text of what he said.

“[The Steelers] grew incredibly fond of him, and there was a mutual respect and appreciation. Dwayne loved living in Pittsburgh. He adopted it as his home and rarely left. He was in the Steelers training facility every day. After this season ended working to make himself better, to give himself a chance to compete for the teams starting quarterback job. There are those in the organization who were convinced he was on his way to doing it. And that his best days were ahead of him. Dwayne was with the Steelers’ QB coach Mike Sullivan every day, watching film. And when he wasn’t taking steps there in the film room, he was in the weight room, working out. He was making a difference, not just on the field but off it, where he was known to be incredibly selfless. He was as active as any Steeler in the community. Never saying no to anything.

“The team requested going to food drives around Thanksgiving with turkeys and taking kids, shopping for toys around Christmas. He did work in the community without the team asking or even knowing he did it. He immersed himself in the community and he’d become a part of it just a few weeks ago. He went on a Steelers’ fan cruise. And by the end of it, he was the most popular player on that cruise. And they all wanted him to come back. He was known for his smile, his kind heart and his dreams, and sadly and tragically. Those were all snuffed out before they could become a reality. Dwayne Haskins was be by his teammates in the NFL community. As the outpouring of support over the weekend showed he was beloved because of his smile, his attitude, his work ethic, his growth, and the man that he had turned into.”

Schefter wrapped up his thoughts by again apologizing.

“His was a life taken too young. He was 24 years old, a month shy of his 25th birthday. This is the Dwayne Haskins that deserves to be remembered. This is the way he was and the way he lived and apologies that was not made clearer sooner by me. But the people who knew him best knew this already. This was the man they knew he always will be missed and always will be remembered, sincere condolences to his family, friends, and everyone he touched.”

Schefter was one of several people criticized by their commentary in the wake of Haskins’ death. Gil Brandt made crass comments reacting to the news. He apologized on Twitter over the weekend.

Schefter has been a hub of controversy in recent months for questionable reporting ethics. That included his relationship with Washington Commanders’ owner Dan Snyder, who Schefter once called years ago “Mr. Editor” in reference to a story he was working on. Schefter recently signed a new contract with ESPN reportedly worth $9 million per year.

Listen to Schefter’s full comments below.

An apology and a tribute to Dwayne Haskins. pic.twitter.com/QxjShC4ZYu