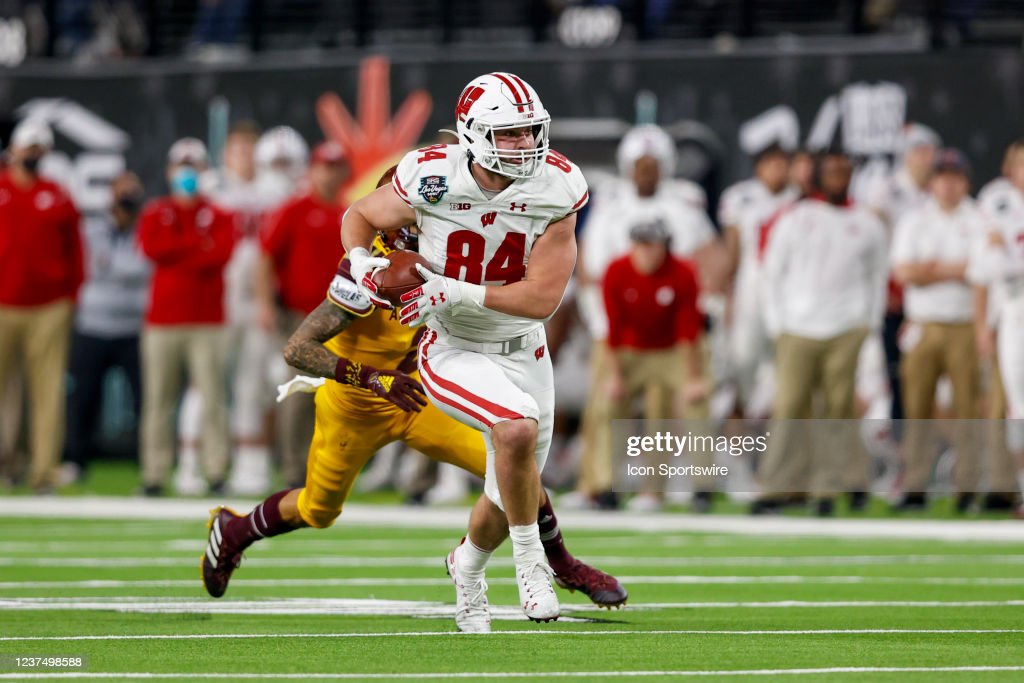 From now until the 2022 NFL Draft takes place, we hope to scout and create profiles for as many prospects as possible, examining their strengths, weaknesses, and what they can bring to an NFL franchise. These players could be potential top 10 picks, all the way down to Day 3 selections and priority undrafted free agents. Today, I’ll be taking a look at Wisconsin tight end Jake Ferguson, a four-year starter for the Badgers.

-Sure-handed tight end that excels over the middle as a chain-mover
-Strong route tree overall for the position
-Easy mover that creates ample separation all over the field
-Comfortable moving all over the formation; wore a lot of hats for Wisconsin over the years
-Profiles as a true 3-down tight end
-Wide catch radius with excellent body control to contort/adjust to off-target throws
-Makes a ton of plays through contact; fearless over the middle
-Good hand usage overall on releases to win cleanly
-Adequate speed for the position while pushing vertically up the seam

-Can function as in-line blocker but needs to add strength overall to handle NFL defensive ends
-Average to below-average burst/explosion into and out of breaks
-Offers very little after the catch
-Not overly dynamic athlete which could hinder him at the next level
-Not as physical for the position as some would like; more finesse overall
-Will have tough time with handsy linebackers and safeties that thrive on physicality at next level
-Profiles as more of a help blocker than a solo assignment TE

-Four-year starter for Wisconsin who played in 46 career games (35 starts)
-Finished four-year career at Wisconsin with 142 career receptions for 1,585 yards and 12 touchdowns
-Named All-Big Ten in 2020 and 2021, honorable mention in 2019
-Former Four-Star recruit in 2017, ranked the No. 2 tight end in the country that year
-Comes from a football family; father played at Nebraska, older brother was a safety at Wisconsin
-Grandson of legendary Wisconsin coach and current Athletic Director Barry Alvarez

In a deep tight end class overall, Wisconsin’s Jake Ferguson, arguably the most productive and experienced of the bunch, continues to fly under the radar.

A four-year starter at Wisconsin, Ferguson is a reliable, chain-moving tight end in the passing game, and is passable as an in-line blocker in more of a support role in the run game, which allowed him to stay on the field constantly under head coach Paul Chryst.

Though he’s not as flashy as some of the other tight ends in previous classes, let alone this class, Ferguson is that favorite pair of jeans, or that same travel mug you drink your coffee out of each morning: reliable as they come.

Despite not being the fastest or most explosive, Ferguson does a really nice job at the top of his stem, creating ample separation throughout his route tree overall.

Here against Iowa in 2018, Ferguson does a great job of getting on top of the slot cornerback before breaking outside cleanly (with the help of a bit of a push off) to get open past the sticks. From there, he does a nice job coming to a stop, letting the defender slide by for the missed tackle, runs through another tackle and picks up an additional nine yards. He’s not going to offer a ton after the catch, in terms of explosive plays, but he’ll pick up the hidden yardage that all counts the same in the end.

Ferguson has just enough speed and wiggle in his routes to win vertically, which he does here against Illinois. You can see him lined up in-line on the left side of the line. He does a great job getting vertical cleanly off the snap, sells the out route with the head fake and then gets upfield to make the basket catch for the score. Though this is on the fringe of the red zone, this is an area that’s a real strength to his game overall.

One thing I noticed throughout Ferguson’s tape was his willingness to go over the middle and high-point the football. He’s fearless and really excels at making plays in the air throughout contact. Here, he takes a huge shot from Michigan’s Daxton Hill on a high throw from his quarterback. He makes the difficult catch look relatively easy.

At Wisconsin, Ferguson lined up all over the formation, giving him some serious flexibility moving to the next level, which can only be viewed as a position. You can see in the clip above that he’s not overly explosive or one of the top athletes on the field. He just consistently wins though and has a knack for making the first defender miss right after the catch, which is quietly an underrated part of his game.

He does need to clean up some of his route running though, as you can see he sells this out route immediately and rounds it off, allowing the Army defender to jump it and close in on him. NFL defenders will take advantage of that much better than that Army defender did.

Again, Ferguson is very solid in the red zone. He does a great job working through traffic and has shown he has nimble feet and great overall body control. I loved this rep against Iowa last season. Working through traffic in the condensed area of the field, Ferguson perfectly sells that he’s blocking before slipping out for the wide open score. He even shows off his feet by tapping them in the back of the end zone.

Overall I think Ferguson has the chance to have a very long career in the NFL as a three-down tight end on a West Coast style offense. He’s a consistent chain mover with good hands overall that pop on tape, wether he’s plucking the ball away from his body, contorting to corral an off-target throw or high-pointing the football in traffic.

Watching Ferguson over four seasons, I get major Jack Doyle vibes from the Badger. Doyle had a long, successful career as a possession tight end that wasn’t flashy before retiring this off-season. Ferguson isn’t going to put up huge numbers in the NFL, but he’ll be good for 50 catches, 500 yards and a handful of scores each season in the right offense.

Right now he feels like a solid value in the fifth round as a guy who can step in as a team’s No. 2 at a tough position to transition to the pro level at and provide meaningful snaps right away.