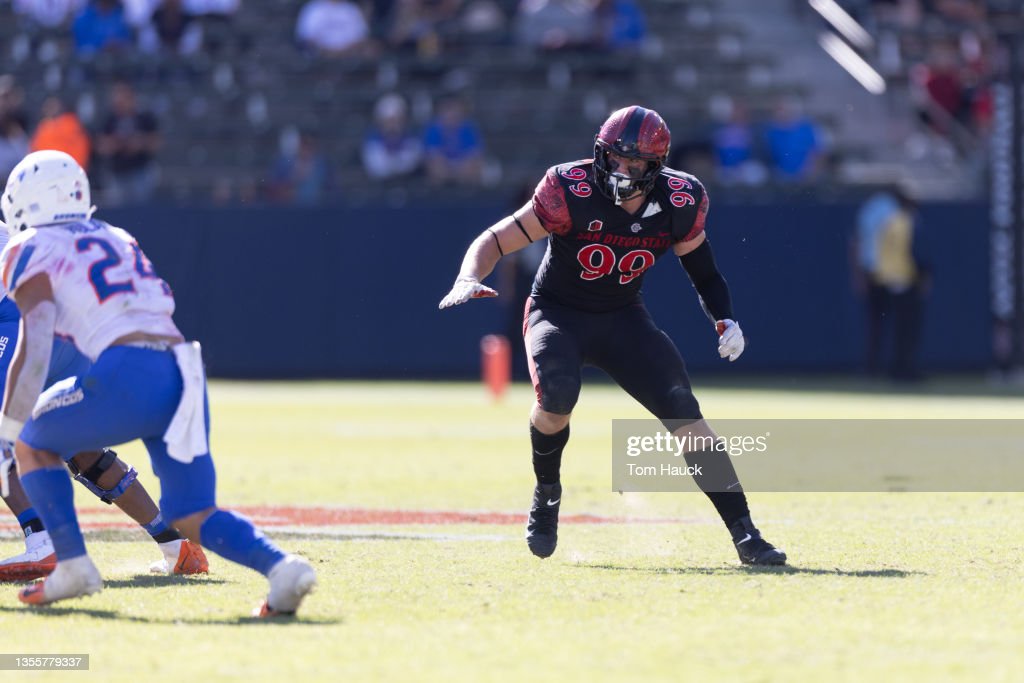 From now until the 2022 NFL Draft takes place, we hope to scout and create profiles for as many prospects as possible, examining their strengths, weaknesses, and what they can bring to an NFL franchise. These players could be potential top 10 picks, all the way down to Day 3 selections and priority undrafted free agents. Today, I’ll be profiling an edge rusher that enjoyed a strong final season in the Mountain West Conference, but an injury during the pre-raft process has prevented him from participating in the All-Star circuit and work out in front of scouts and executives.

— Possesses good size and bulk on a promising frame
— Scheme and position versatile, having played outside the OT all the way to head-up on the center
— Plays with a relentless motor and is constantly chasing the ball
— Pursuit of the ballcarrier shows up down the LOS and into the second level
— Effort rusher that will get clean up sacks and pressures on 2nd or 3rd rush attempts
— Has a varied, thought-out pass rush plan with counter moves in his toolbox
— Likes to use the long arm/stab move as well as the swim/arm over to fight half a man on the inside/outside
— Will rip through the blocker’s shoulder in attempt to squeeze through gaps
— Uses his hands well as a pass rusher, constantly fighting to knock down blocker’s hands to keep them off his frame
— Will counter back under across the OL’s face on the rush rather than overrunning the play at the top of the arc on the edge
— Finds a way round blocks and through the trash to get onto the ball when he penetrates in the backfield
— Looks to quickly jab/stab the blocker at the snap of the ball and then shoot a gap or shed the block
— Motor and effort make him an effective twister/stunter on games up front
— Brings everything he has as a tackler, looking to put ballcarriers into the ground
— Well-spoken, high-character individual that will be a coachable, positive presence in the locker room
— Willingness to play multiple positions suggest he is a team-first, selfless player

— Only has average play strength and lacks explosiveness for the position
— Struggles to generate power as a bull rush or to push the pocket when inside on guards and centers
— Speed rush doesn’t scare you unless he beats you with his hands as a technician
— Played sub-par competition compared to what he will see at the next level
— Got plenty of production on the slanting front SDSU ran as well as on those twists/stunts
— Will fight to anchor down against the run, but struggled to hold his spot when playing inside
— May benefit from adding weight and becoming a full-time interior DL (3-4 DE) than playing more on the edge at the next level
— Lacks suddenness and flexibility to bend around the corner as a pass rusher on the edge
— Plays far too upright at times against the run and as a pass rusher, leading to getting driven off the ball or being neutralized on his pass rush

— Redshirt Junior prospect from Carlsbad, CA
— Born Jan. 7, 2000 (age 22)
—  Older brother, Zachary, is the starting right tackle for SDSU
— A three-star recruit by 247sports and a two-star recruit by Rivals, playing both defensive end and tight end
— Was on the travel squad for three games as a true freshman, but only saw action in one game, allowing him to redshirt in 2018
— Played in 13 games in 2019 and started 12 after redshirting and recorded 49 total tackles (20 solo), nine TFLs, and 5.5 sacks along with one PBU
— Made the move from defensive tackle to defensive end four games into the 2020 season
— Played and started in eight games for the Aztecs in 202 and recorded 35 tackles (21 solo), 9.5 for loss with four sacks with a PBU
— Enjoyed a breakout season in 2021 that prompted him to declare for the draft after he had 71 total stops (30 solo), 20.5 TFLs, and 11.5 sacks with a forced fumble in 14 starts
— Sustained a hamstring injury during the opening practice of the Senior Bowl, preventing him from participating in the event and testing at the NFL Combine
— AP All-American and MWC Defensive Player of the Year (2021), Two-time First-Team All-Mountain West (2019-20), The Athletic Freshman Second-Team All-American (2019)
—  All-Academic Team (2020)
— Social Science Major

Cameron Thomas didn’t have to go far for college after starting for Carlsbad High. Born in San Diego, Thomas decided to follow his older brother, Zachary, to San Diego State who was already on the team as an offensive lineman. Cameron was recruited as a defensive end, but with the depth chart full there early in his college career, he was open to kicking inside to defensive tackle for his first full season in 2019. Thomas has proven to be a selfless, schematic and position versatile defender for the Aztecs, lining up all over the LOS and willing to play whatever role that was asked of him.

When you watch Thomas on tape, you see a defender that plays with high effort and whose motor is running hot on every snap. When talking to Thomas at the Combine, he mentioned that his goal is always to find and get to the ball on every snap, regardless of the circumstances. This shows up in his phenomenal pursuit of the football. Here’s an example where Thomas gets to the pass on second effort after not being able to win on his initial rush, being able to pressure the QB and lay a good hit on him as he releases the ball to the flat on the check down.

You see that similar effort in run defense for Thomas as he will fend off blocks in attempt to make plays in the backfield or out on the sideline. Here we see Thomas fight off the block of the TE toward the sideline, fighting to keep his outside leg and arm free as he reaches out to bring down the runner behind the LOS for a short loss of yardage.

Thomas is relentless as a pass rusher, using a variety of moves from different alignments on the defensive front to try and get home to the QB in the pocket. Here we see Thomas line up just inside the OT and shoot the gap of the RG of Boise State, executing a great swim/arm over move to clear the block and lay a nice hit on the passer as he throws the ball away.

Thomas is a smart pass rusher that has a plan with counters in his back pocket ready to go. He also uses his hands well to swat down the arms of OL trying to get a hold of his frame to keep clean in his pursuit of the QB. Watch this play against the Broncos where Thomas catches the LT leaning and swats his hands down as he rounds the corner and piledrives the QB into the ground for the sack.

We also see Thomas win by cutting back inside to cross the tackle’s face if he over sets or overcommits to the outside like on this rep against San Jose State. Here Thomas lines up as a 7-tech coming hard off the edge but gets the arm over/rip through after attacking the blocker’s chest, clearing the block right into the QB who he drills as he releases the ball which falls incomplete.

San Diego State ran a lot of twists and stunts in a slanting defensive front which helped Thomas see some advantageous matchups. Still, even when he wasn’t the one making the play, he was providing pressure to help his teammates get the sack. Here are a couple of examples of Thomas on a twist as well as coming off the edge, fighting around his block and getting the QB to step up into his teammates’ arm who makes the play after Thomas’s assist.

While Thomas is undersized when playing inside, he does play with plenty of effort and can hold his own in run defense. He will fight hard to hold the point of attack and fend off blocks to make plays on the football against the run when kicked inside like we see on this play against UTSA, standing up the blocker and shedding the block to make the tackle.

Still, Thomas lacks ideal mass and can play with a high pad level at times, making it difficult to avoid being overpowered by sheer size and strength of larger interior blockers. Here is one example against Utah State where Thomas slides inside and gets driven backward by the tackle coming down on him, being unable to get off the block in-time to tackle the runner who converts on third-and-one.

Thomas also tends to play little upright as a pass rusher as well, often exposing his chest to be neutralized by blockers. He is more of a one-speed pass rusher that does have elite burst or bend around the corner, often relying on his hand usage or an inside counter to win when coming off the edge. Here is an example of Thomas a little high, attempting a two-hand swipe on the LT, but fails to turn the corner as he begins to slip and fall due to lack of balance playing to upright as he tries to turn the corner.

Overall, Cameron Thomas is a high-effort, position versatile defender that can play either on the outside on the edge or kick inside and take advantage of guards and centers with his quickness. He plays with a non-stop motor and brings a varied pass rush plan with counters in his toolbox to the table to put pressure on the QB. Thomas is a functional, yet not exceptional athlete that won’t consistently win with speed and bend around the edge and isn’t a great power rusher either. While Thomas can find a home as an edge rusher, his best move may be bulking up to kick inside as a 3-4 base end to better hold his own against the run and win more consistently against interior blockers.

When watching Thomas, it isn’t hard to draw parallels to former Buckeye and current Cincinnati Bengal Sam Hubbard. Hubbard has a near identical frame (6’5 3/8”, 270lb) as well as similar athleticism that plays on the edge, but also can kick inside on sub packages to win against offensive guards. While not a superior athlete like Thomas, Hubbard too exudes great pursuit of the football and has different pass rush moves he utilizes to defeat blocks and make plays as a pass rusher. He was drafted in the third round in the 2018 NFL Draft and has since signed a four-year extension with Cincinnati, recording 24 sacks in his first four seasons.

I can see Thomas being drafted in a similar range and have a similar impact in the pros as Hubbard as a steady, reliable #2 pass rusher that can complement a higher-caliber EDGE across from him. Speaking with Thomas at the Combine, he came off as a bright, enthusiastic, high-character individual that will be a team player and will maximize his opportunities given to become the best player he can. While his upside may be capped, his motor and play demeanor should provide a steady floor that can be a value pick in the middle rounds. Pittsburgh could use a #3 EDGE behind T.J. Watt and Alex Highsmith and Thomas has the character and play style that would fit well in the locker room.