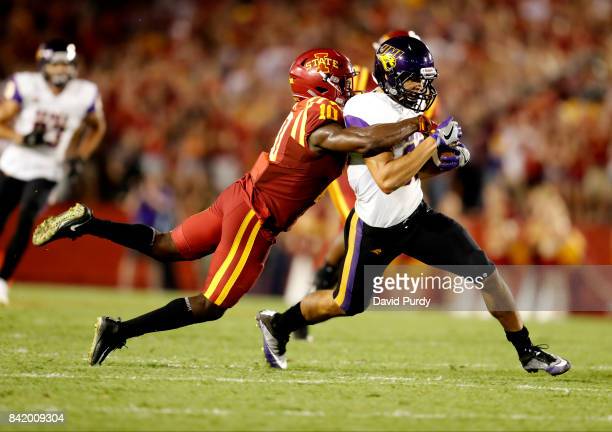 Today I wanted to visualize some great data from Kent Lee Platt’s Relative Athletic Scores (RAS) for the wide receivers. Here is a link to his website in case you haven’t seen his work  https://ras.football/. To qualify for a RAS score, a player must have a total of six recorded metrics from any of the following: Height, Weight, Forty-yard dash, Twenty-yard split, Ten-yard split, Bench Press, Vertical Jump, Broad Jump, Short Shuttle, and 3-Cone. The player is then graded on each in comparison to the positional database since 1987 to get more of a feel of their size, speed, explosion, agility, and total value, giving context to the raw numbers. 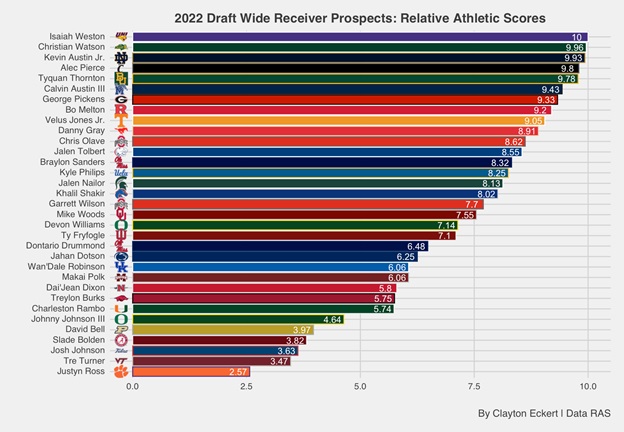 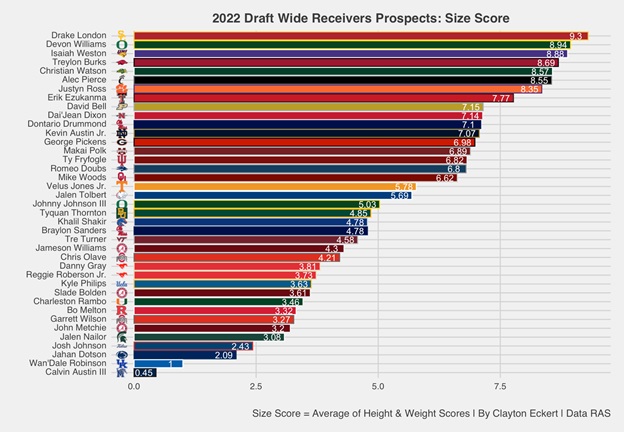 Here we see exactly 50% of the combine invites have above five size scores, highlighting the athletic but smaller overall class compared to the historical data. USC wide receiver Drake London is the only player with an above nine size score but did not test otherwise.

Six players have a size score above eight, starting with Devon Williams from Oregon who also has a +7 RAS. Weston topped the RAS plot and is ranked third in size score! Burks fares well here but important to remember his lower but above five RAS. Watson has the second-best RAS along with the fifth ranked size score! Pierce has similar value the sixth ranked size score paired with the fourth best RAS! Ross is the final player in this size group, but crucial to remember he has the worst RAS result.

Texas Tech wide receiver Erik Ezukanma leads the group of players with above seven size scores but didn’t qualify for an RAS, testing minimally with great explosion and good size. After a drop off, Bell has good size but important to remember his below average and fifth lowest RAS. Dixon has good size to pair with his +5 RAS, but important to remember his very poor agility. Drummond is similar with slightly better agility. Austin Jr. is the final player of this group with great value at his size considering his third ranked RAS in the high nines!

The following players have above six size scores. Pickens tops this group, along with his +9 RAS! Polk has a better size than RAS score, both in the plus six range. Fryfogle just eclipsed a seven RAS to pair with his upper six size score. Nevada wide receiver Romeo Doubs has good size, but unfortunately didn’t test otherwise. Woods fared better athletically with a mid-seven RAS at his size.

The final three players I will point out here cap off the above five size scores. Jones Jr. pairs his okay size with a strong +9 RAS! Tolbert has a mid-eight RAS at his size, and Johnson III barely peaks the above five size number, unlike his RAS of 4.64. 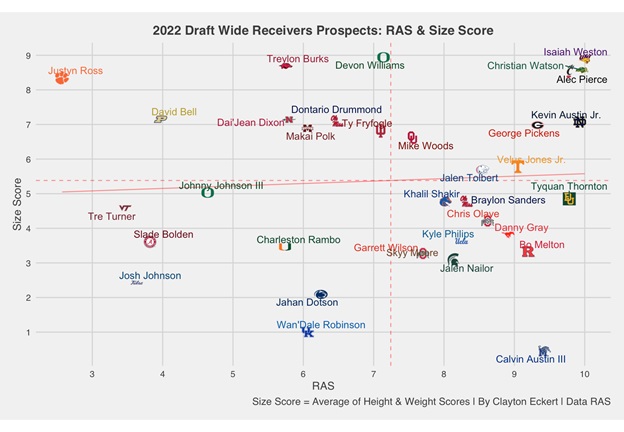 The graph highlights Weston, Watson, and Pierce as the players with the best package of size and athleticism of the qualifying players. Austin Jr. matches them in athleticism, and the other players above the mean in both data points include Pickens, Jones Jr., Tolbert, and Woods. Several players on the bottom right provide great value as well with above average athleticism needed at the position, along with the top left group all around +7 scores or above. One thing’s for sure, it is a strong class with depth that provides many versatile options for teams to take advantage of.

For those that like the numbers, it’s unfortunate a few players (mainly London, Doubs, and Ezukanma) didn’t test fully, especially considering the need at the position. It will be interesting to monitor the pro days and continue to see how the men stack up in the coming weeks when Platt updates the site with the unofficial numbers.