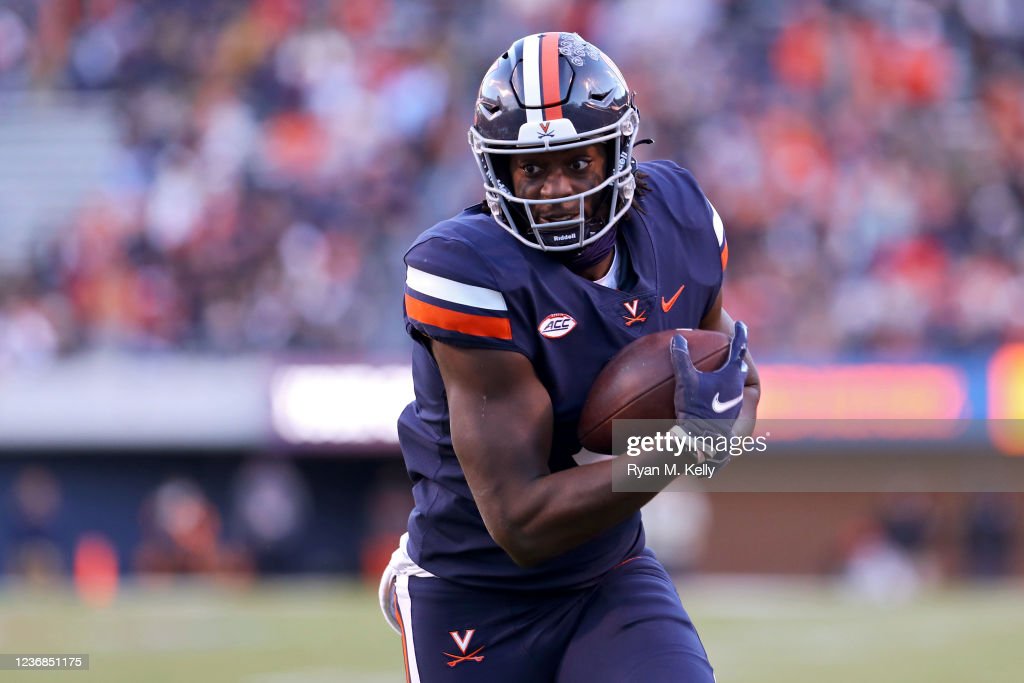 Today I wanted to look at the data from Kent Lee Platt’s Relative Athletic Scores (RAS) for the tight ends. Here is a link to his website in case you haven’t seen his work  https://ras.football/. To qualify for a RAS score, a player must have a total of six recorded metrics from any of the following: Height, Weight, Forty-yard dash, Twenty-yard split, Ten-yard split, Bench Press, Vertical Jump, Broad Jump, Short Shuttle, and 3-Cone. The player is then graded on each in comparison to the positional database since 1987 to get more of a feel of their size, speed, explosion, agility, and total value, giving context to the raw numbers. 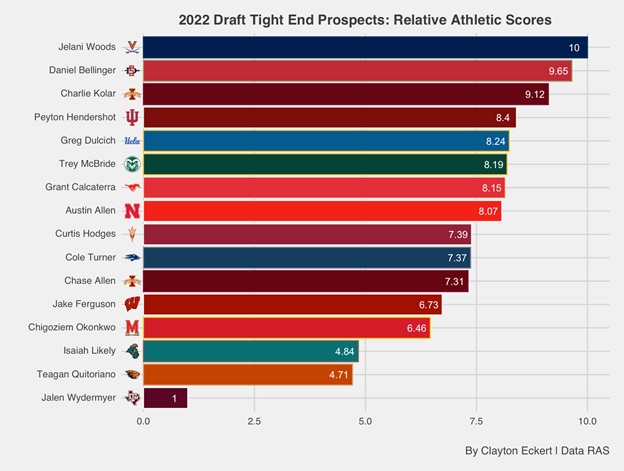 Right away we can see good overall athleticism at the position with 13 of the 16 qualifying players well above a five RAS. Three of those players have an RAS above nine, starting with Virginia tight end Jelani Woods who has elite speed and explosion, with great size and agility and a perfect 10 RAS! San Diego State tight end Daniel Bellinger has elite speed, great explosion, with good size and agility. Iowa State tight end Charlie Kolar has great explosion and agility along with good size and speed. 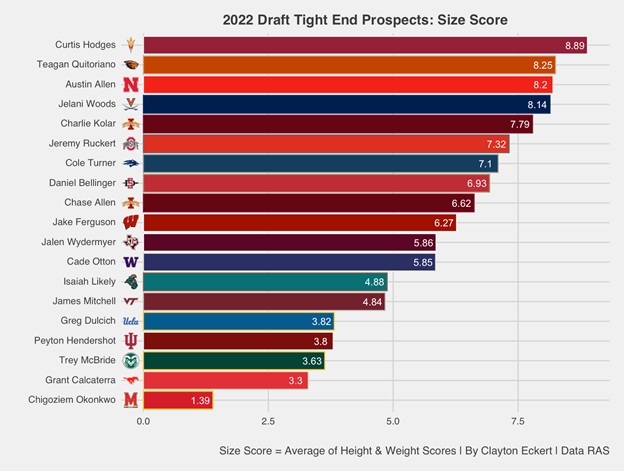 Here we see great context after the athleticism view, with more players having a below five size score and no players above a nine, highlighting the position getting smaller and more athletic over the years.

Four players have a size score above eight, starting with Hodges who also has an above seven RAS. Quitoriano tops the lower eight size scores but has a RAS in the upper four range and important to remember his poor agility and very poor speed. Austin Allen pairs this result with a RAS also in the low eights. Woods bookends this group along with his perfect RAS.

Kolar is the first of three players with above seven size scores, pairing this result with his third ranked RAS above nine. After a drop off we see Ohio State tight end Jeremy Ruckert who didn’t qualify for a RAS. Turner pairs his low seven size score with a slightly better RAS.

Another three players have size scores in the six range, beginning with Bellinger at the top and pairing this result with his second ranked RAS in the mid-nines. Chase Allen has a mid-six size score along with an above seven RAS. Ferguson lands in the lower six range and has a slightly better RAS.

Two players have size scores in the upper fives. The first is Wydermyer who had the lowest RAS of one, and important to remember his very poor speed and explosion. Washington tight end Cade Otton is the other and didn’t test fully.

Another two players have size scores in the upper fours, starting with Likely who pairs this result with a slightly lower RAS and important to remember his poor agility. Virginia Tech tight end James Mitchell is the other and didn’t test fully.

Four players all have above three size scores along with an above eight RAS: Dulcich, Hendershot, McBride and Calcaterra.

After a huge drop off is Okonkwo, who has a RAS in the mid-sixes. 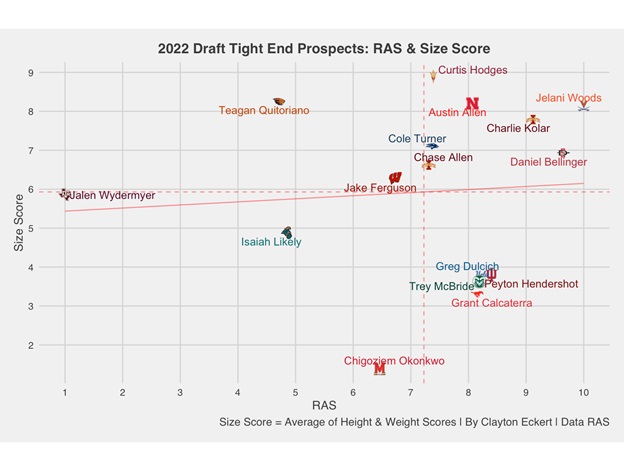 On the top right we see Woods has the best combination of size and athleticism at the position, along with an interesting top seven players above the mean in both data points, especially Kolar, Austin Allen, Bellinger, and Hodges. The clump of players on the bottom right highlight an earlier point with that group of players fitting the bill of athletic but lacking size comparatively/historically, and the players below the RAS mean all over the graph in regards to size.

While we have numbers for most of the players that received combine invites, it would have been nice to get full workouts for Ruckert, Otton, and Mitchell.