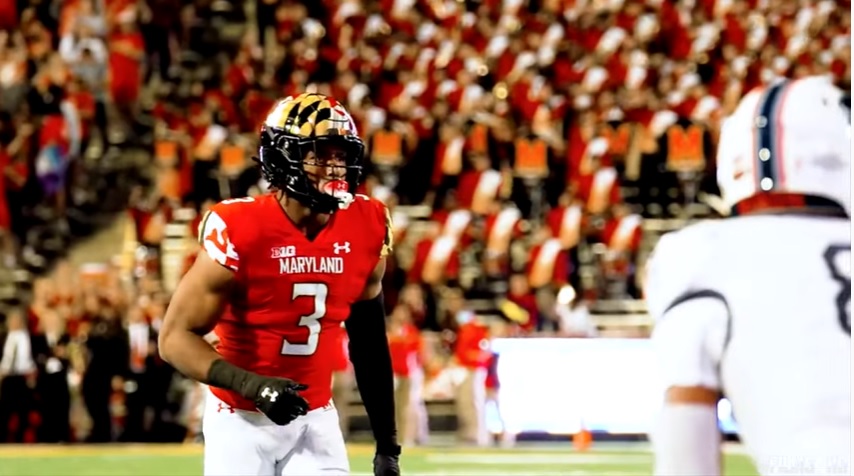 Today I wanted to look at the data from Kent Lee Platt’s Relative Athletic Scores (RAS) for the safeties. Here is a link to his website in case you haven’t seen his work  https://ras.football/. To qualify for a RAS score, a player must have a total of six recorded metrics from any of the following: Height, Weight, Forty-yard dash, Twenty-yard split, Ten-yard split, Bench Press, Vertical Jump, Broad Jump, Short Shuttle, and 3-Cone. The player is then graded on each in comparison to the positional database since 1987 to get more of a feel of their size, speed, explosion, agility, and total value, giving context to the raw numbers. 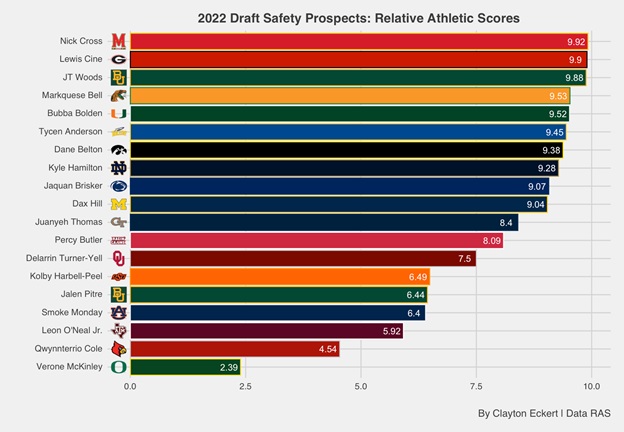 After a drop off two players have a RAS above eight, starting with Georgia Tech safety Juanyeh Thomas who has great speed, good size and explosion, and okay agility. Louisiana safety Percy Butler has elite speed, okay explosion, but poor size.

The only player with an above seven RAS is Oklahoma safety Delarrin Turner-Yell, who has great speed but very poor size.

The final player with an above five RAS is Texas A&M safety Leon O’Neal, who has good explosion and agility, okay size, but poor speed.

Only two players have a below five RAS, starting with Louisville safety Qwynnterrio Cole who has good explosion and agility, okay size, but very poor speed. Oregon safety Verone McKinley has a very low 2.39 RAS with okay explosion, but poor size, speed, and agility.

The data shows the strong athleticism in this class with 17 of the 19 qualifying players with a RAS above five! 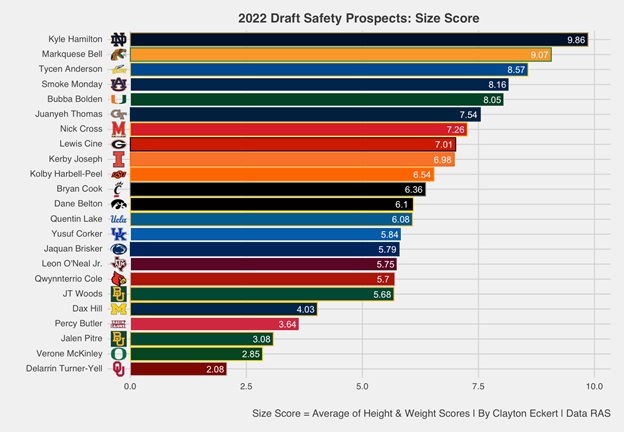 Here we see 18 of the 23 combine invites (78%) with an above five size score, important context with most players at the position offering above average athleticism! Hamilton takes the cake in regards to size, with a score in the high nines to go along with his +9 RAS! Bell was the only other player with a size score above nine, with an even stronger RAS!

Three players have a size score above eight, with Anderson topping this group along with an above nine RAS! Monday has a low eight size score but important to remember his poor explosion and agility. Bolden is the final player of this group and is also one of the ten players with a +9 RAS!

Another tier of three players have a RAS above seven, starting with Thomas who has a plus eight RAS. Cross has the top ranked RAS to go with his 7.26 size score, and Cine’s low seven size score pairs with the second ranked RAS at the position!

There are five players with above six size scores, beginning with Illinois safety Kerby Joseph but he unfortunately didn’t test fully. Harvell-Peel has a mid-six size score and RAS and important to remember his poor agility. Cincinnati safety Bryan Cook was another player that didn’t run, followed by Belton with a low six size score but +9 RAS. UCLA safety Quentin Lake rounds out this group, but also didn’t qualify for a RAS score.

The next five players have an above five size score, with Kentucky safety Yusuf Corker being the last player who didn’t test fully. Brisker provides value in this group with his +9 RAS, and O’Neal has a RAS and size score in the fives and important to remember his poor speed. Cole’s +5 size score is where he fared best, recalling his RAS in the fours and important to remember his very poor speed. Woods has the third ranked RAS in the high nines to pair with his 5.68 size score to close this group. 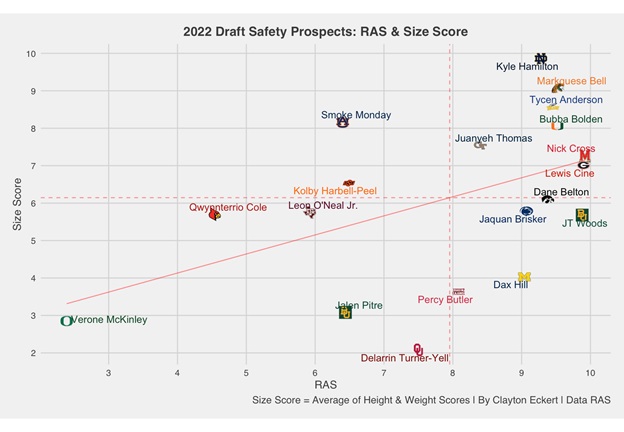 This visual really highlights the points made through the article, with several players at the position offering the athleticism and size that most teams look for. The top tier with above nine scores in both data points are Hamilton and Bell, with Anderson and Bolden matching in athleticism with less yet respectable size. Cross and Cine have the best athleticism of the bunch with above the mean size, along with Thomas being the final player above the mean in both data points.

While most players tested at the combine, I was really hoping to see numbers for the ones that didn’t (especially Cook and Lake) considering the current need at the position. It will be interesting to monitor the pro days and continue to see how the men stack up in the coming weeks when Platt updates the site with the unofficial numbers.