Today I wanted to look at the data from Kent Lee Platt’s Relative Athletic Scores (RAS) for the edge rushers. Here is a link to his website in case you haven’t seen his work  https://ras.football/. To qualify for a RAS score, a player must have a total of six recorded metrics from any of the following: Height, Weight, Forty-yard dash, Twenty-yard split, Ten-yard split, Bench Press, Vertical Jump, Broad Jump, Short Shuttle, and 3-Cone. The player is then graded on each in comparison to the positional database since 1987 to get more of a feel of their size, speed, explosion, agility, and total value, giving context to the raw numbers.

The goal of the series is to provide the RAS from Platt, with a bit of my own twist with a size score and visualize it to get a simultaneous view of all the players at their position that participated at the combine. Here are the players that qualified (NOTES: Positions are grouped from the combine results tracker compiled by Dave Bryan and Alex Kozora. Also, RAS lumps the position group as defensive end, so the size score number reflects poorly on 3-4 outside linebackers overall, so we will take the number with a grain of salt as we see how the players compare.): 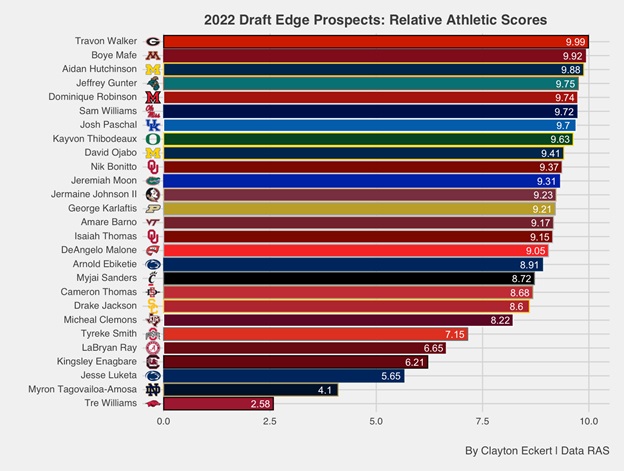 After a drop off, we see the only player with an above seven RAS is Ohio State edge Tyreke Smith who has great agility, good explosion, okay speed, but poor size.

Only one player has a RAS above five, Penn State edge Jesse Luketa who has good explosion and agility, okay speed, but poor size.

The final two players have a below five RAS. Notre Dame edge Myron Tagovailoa-Amosa has good speed, okay size, but poor explosion. Arkansas edge Tre Williams has great agility, okay size, but very poor speed and explosion along with the lowest RAS of the position group. 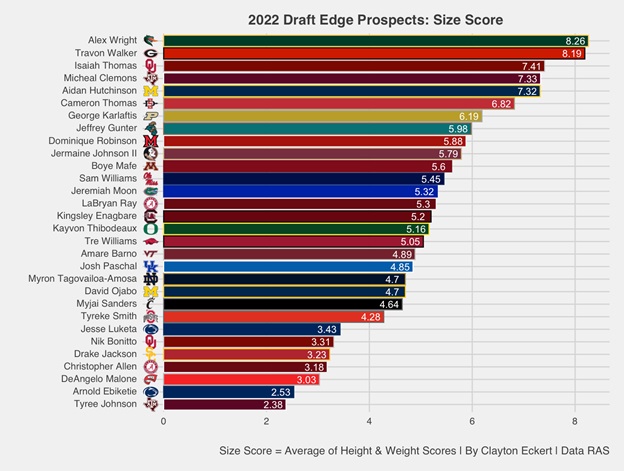 Here we see a drastic difference in the scores, emphasizing the position getting far more athletic with the other side of the coin being smaller statured players compared to history. As stated at the beginning of the article, the position is grouped as defensive end, which is unfortunate for 3-4 defensive teams, so I would recommend viewing the graph as a ranking/comparison as opposed to focusing in too hard on the literal numbers considering each player is above Alex Kozora’s past “What the Steelers Look For” studies in height and weight.

Two players have an above eight size score, starting with UAB edge Alex Wright, but he didn’t test fully. Walker pairs his second ranked size score with his near perfect RAS!

After a drop off, Isaiah Thomas fares well with the third ranked size score along with a RAS in the low nines. Clemons had a lower RAS of the group but in the respectable low eights along with the fourth rank in size. Hutchinson pairs his fifth size rank with his high-nine RAS which ranked third!

Cameron Thomas ranks sixth in size along with a mid-eight RAS. Karlaftis ranks seventh with a low-nine RAS.

Gunter begins a range of players with above five size scores (which is still quite acceptable in the Steelers scheme) along with a high-nine RAS that ranked fourth. Robinson ranks just behind in both data points, followed by Johnson II who pairs his size with a RAS in the low-nine range. Mafe has a high nine RAS which ranked second, followed by Sam Williams in the lower five size group with a sixth ranked RAS. Moon has a lower nine RAS to pair with his size result. Ray has a much lower RAS in the mid-sixes, followed closely by Enagbare in both data points but important to recall his poor agility. Thibodeaux’s strong RAS pairs well with his above five size, and the final player with an above five score is Tre Williams, but important to recall his very poor speed and explosion along with the lowest RAS in the twos.

Barno provides a low-nine RAS with acceptable size in the Steelers eyes, followed closely by Paschal who pairs this with a stronger RAS that ranked seventh. Tagovailoa-Amosa has the second lowest RAS at the position and important to recall his poor explosion, with Ojabo tying in size score along with his much stronger RAS in the nines. Sanders is close behind, with a lower RAS in this class yet strong in the high eights. Smith is the final player of this size group and pairs this result with a lower RAS in the low sevens.

Luketa heads the next group pairing this result with the third lowest RAS in the mid-fives. Bonitto’s up next with a much better RAS in the lower nine range, followed by Jackson who has a lower yet respectable RAS in the mid-eights. Alabama edge Christopher Allen has the fourth lowest size score but didn’t qualify for a RAS. Malone pairs the third lowest size score with a RAS just above nine, and Ebiketie ranked just below him in both data points with a RAS in the high eights. Texas A&M edge Tyree Johnson lands at the bottom of the size scores but didn’t test otherwise. 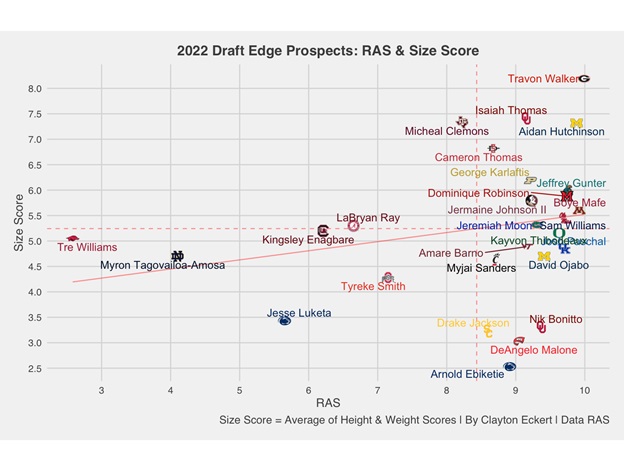 The incredible number of players at the far right highlight an extremely intriguing class full of athleticism, highlighted by the mean line for RAS at nearly 8.5! Also enjoyed using the size scores to see tiers and styles of players that mostly could be on the Steelers radar.

Walker highlights the group comfortably with the strongest blend of size and athleticism, followed by a second tier of Hutchinson and Isaiah Thomas with 11 total players including several intriguing names above the mean in both data points. With the depth and quality at the position, hopefully the Steelers can get value if the board falls the right way with hopefully one of the players on the right of the graph sporting the black and gold this season.

While we have numbers for most of the players that received combine invites, it would have been nice to get full workouts for Wright, Allen, and Tyree Johnson.