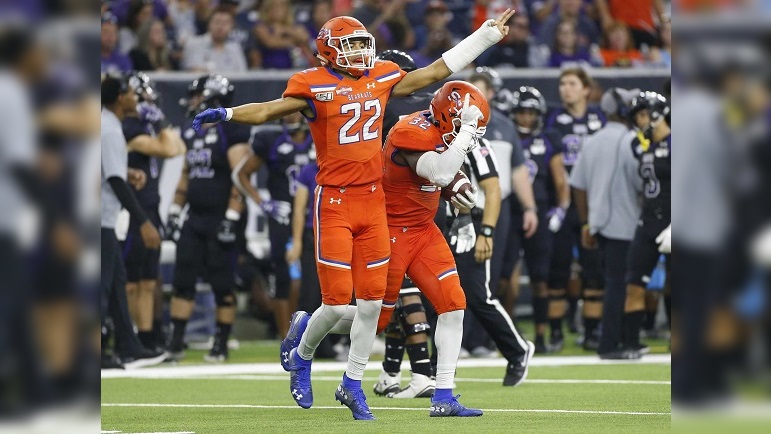 Today I wanted to look at the data from Kent Lee Platt’s Relative Athletic Scores (RAS) for the cornerbacks. Here is a link to his website in case you haven’t seen his work  https://ras.football/. To qualify for a RAS score, a player must have a total of six recorded metrics from any of the following: Height, Weight, Forty-yard dash, Twenty-yard split, Ten-yard split, Bench Press, Vertical Jump, Broad Jump, Short Shuttle, and 3-Cone. The player is then graded on each in comparison to the positional database since 1987 to get more of a feel of their size, speed, explosion, agility, and total value, giving context to the raw numbers. 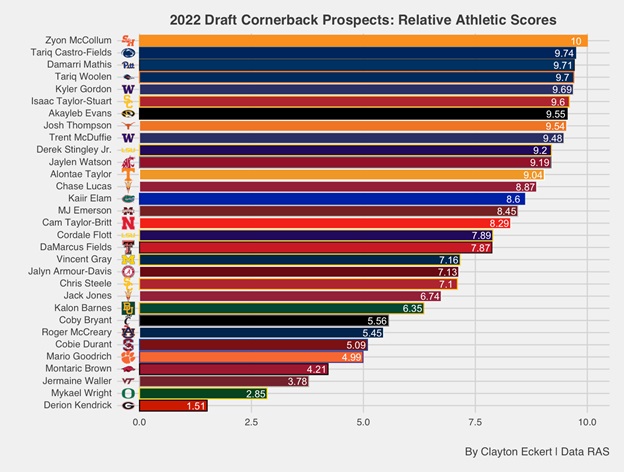 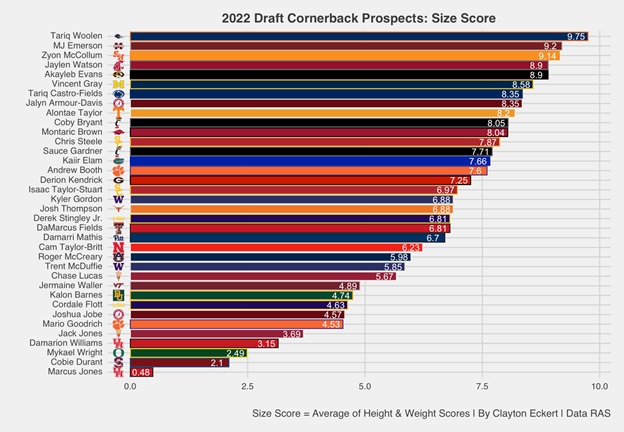 Here we can see great context following the athleticism view, with more players with a below five size score and only three players topping a nine score. Woolen leads the pack along with his impressive high nine RAS that ranks fourth! Emerson is in the lower nine size score range, pairing good value with his mid-eight RAS. McCollum also has a size score in this range that pairs with his perfect RAS score!

Five players have size scores above seven, beginning with Steele who pairs a low seven RAS to this mark and is another player with very poor agility. Cincinnati cornerback Ahmad (Sauce) Gardner has a size score in the high sevens but didn’t test fully. Elam’s size score pairs with a mid-eight RAS with good overall value. Clemson cornerback Andrew Booth has a mid-seven size score but didn’t test fully. Kendrick is the final player of this group but important to remember his bottom ranked RAS and very poor speed and explosion!

The following seven players have a size score above six. Taylor-Stuart fares better as an athlete with his above nine RAS. Gordon matches his results very similarly with a lower size score but ranks fifth in RAS which is one spot higher. Thompson ties Gordon’s size score along with his mid-nine RAS. Stingley Jr. also has an above nine RAS and is tied with Fields in size score, the latter having less athleticism with a high seven RAS. Mathis also fits the pattern of an athletic player with less size, having the third ranked RAS. After a drop off, the final player of this group is Taylor-Britt who pairs this result with an above eight RAS but important to recall his poor explosion.

Only three players have a size score above five, starting with McCreary who also has a RAS score in the fives and important to remember his very poor agility! McDuffie has the athleticism with a +9 RAS in this smaller size group, along with Lucas at a slightly lesser extent with his high eight RAS.

The remaining players have size scores below five, and we can see them clearly in this visual layering all the qualifying players RAS and size scores to wrap up: 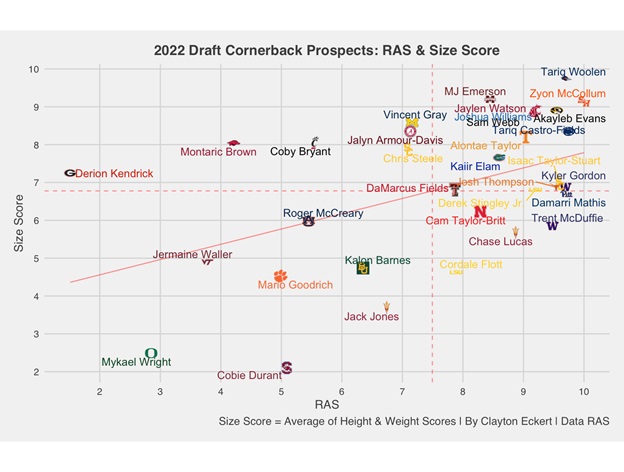 The clump of players on the top right highlights the points made through the article, with several players at the position offering the athleticism and size that most teams look for. McCollum and Woolen highlight the group along with 12 other players above the mean in both data points!

While we have numbers for most of the players that received combine invites, it would have been nice to get full workouts from Gardner, Booth, and Jobe.