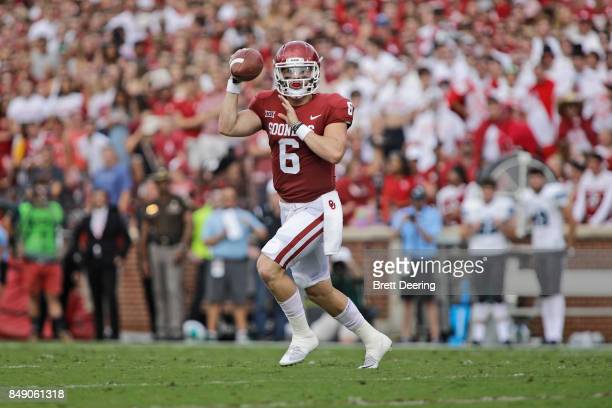 A few weeks ago, I did a red zone performance study on the 2022 quarterback draft prospects, and today I wanted to dive deeper to look at them alongside some recent college quarterbacks. Included in this study are first round selections since the 2016 college season and 2021 Steelers that could return in 2022 while I was at it. The first graph looks at the players completion percentage as well as their catchable percentage, which excludes spikes, throwaways, and miscommunications and includes defensed accurate passes: 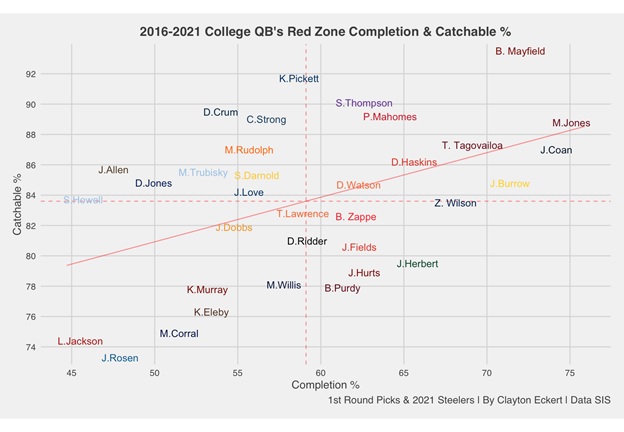 Looking at players above the mean in both data points, we get some strong names including Texas Tech quarterback Patrick Mahomes, LSU quarterback Joe Burrow, and Clemson quarterback Deshaun Watson along with debatably a few others, with Ohio State quarterback Haskins arguably the only true outlier to this point, and it will be interesting to see how Notre Dame quarterback Jack Coan and Kansas State quarterback Skylar Thompson stack up as their careers progress.

When looking at only the 2022 draft prospects, we see Pitt quarterback Kenny Pickett with the highest catchable percentage. Looking back to 2016, the only quarterback that topped this result was Oklahoma quarterback Baker Mayfield. Considering Pickett’s lower completion percentage, we get context to his results with impressive accuracy but his receivers cashing in at only an average rate.

We also see a few other prospects in the upcoming draft toward the top of the catchable results including Thompson, Kent State quarterback Dustin Crum, Nevada quarterback Carson Strong, and Coan all within the top ten out of the 34 players on the graph. The latter also had the highest completion percentage of the 2022 prospects and second overall to Alabama quarterback Mac Jones.

Some interesting catchable results through Steelers lenses are Oklahoma State quarterback Mason Rudolph and Haskins, with the former landing in the top ten with less help from his receivers and the latter ranking 12th with stronger play from his teammates, aiding his eighth ranked overall completion percentage. North Carolina quarterback Mitchell Trubisky ranked 15th in catchable percentage with even less help than Rudolph from his receivers.

Circling back to the rest of the 2022 prospects, we see fellow North Carolina quarterback Sam Howell is the final player of the class at the mean in catchable percentage along with the second worst overall completion percentage to only Louisville quarterback Lamar Jackson. This was a big takeaway for Howell from the last study, lacking a strong supporting cast in 2021 which is highlighted even more with the historical view. 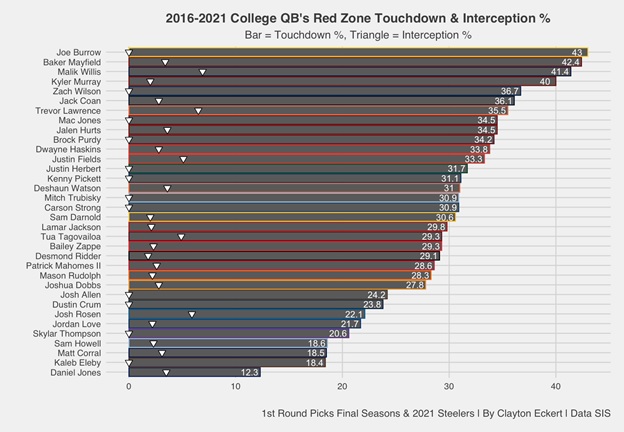 Five out of 12 prospects in this year’s draft have a touchdown percentage below 25%, including Crum, Thompson, Howell, Corral, and Eleby. Corral also had the worst interception result of this group at 3.1%

Next, let’s layer more context with who saw more pressure along with sack percentages in the red zone: 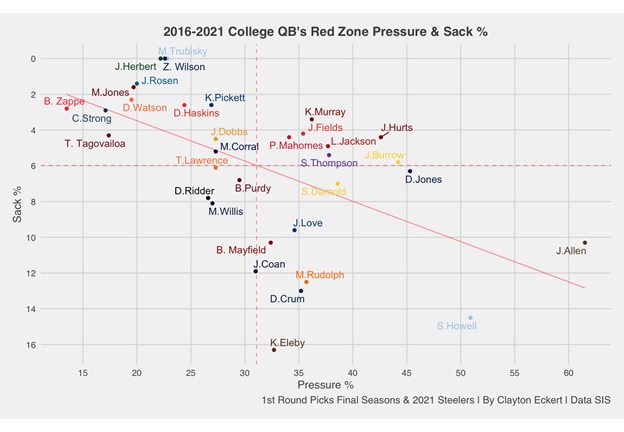 A goal after the previous study was to give context to the pressure and sack rates Howell had last season compared to recent history. Allen was the only quarterback that saw more pressure, 61.5% of the time but a lower sack rate of 10.3% compared to Howell’s 50.9 pressure percentage and 14.5 sack percentage! This gives great context to the pairs previous results, with Allen faring better in the accuracy data as well as touchdown/interception ratio despite the pressure he faced. The only player that had a higher sack percentage than Howell was Eleby, who was only pressured slightly above the mean.

Four out of five of the highest sack percentages are quarterbacks in this year’s draft: Eleby, Howell, Crum, and Coan, along with the fifth player being Rudolph. Three other 2022 prospects land below the mean in both data points (Purdy, Ridder, and Willis), taking sacks at a greater rate than the less pressured quarterbacks.

Seven players landed above the mean in both data points, with Thompson being the only one in this year’s draft and important to recall his shortened season though.

For those that read the previous study, I wanted to provide the same graph to close but did not realize at the time that the points earned data point is only available through 2018. I will still share some of the information since then to compare Pickett’s top 2022 result. Burrow has the top rank with a whopping 50.96 points earned! Mac Jones ranks second out of this group at 31.13, and Pickett ranks third in the time period with his 27.38 points earned which topped Justin Herbert at 25.75. So, impressive results for Pickett while not at the elite level Burrow provided. If you are curious what any other results were since 2018, please let me know in the comments.

To close, here is a total value view using expected points added (EPA), which is defined as the total of a player’s EPA responsibility on passes using the Total Points system that distributes credit among all players on the field for a given play. Totals are scaled up to map to the average points scored or allowed on a team level, with the player’s snap count determining how much to adjust. For passers, this includes accounting for offensive line play, sacks, off-target passes, dropped passes, and dropped interceptions: 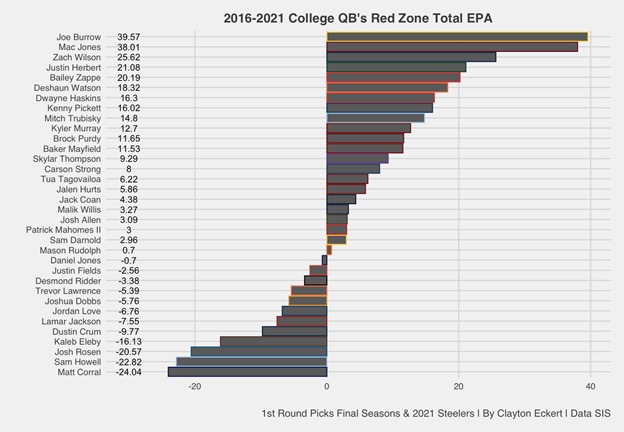 Burrow finds himself atop another graph and was above average in all aspects of the study. Jones had a similar EPA result, both having strong accuracy, touchdown percentages and no interceptions, with the later facing far less pressure.

After a drop off, we see three players with 20+ EPA results to round out the top five: Wilson, Herbert, and Zappe who tops the results for the 2022 group but important to note his highest amount of attempts that cushion his number in comparison. Wilson topped this group through the study while also facing the most pressure of the three.

The next group includes Watson, Haskins, and Pickett with EPA numbers above 15. All three were above average in accuracy, had 31% or above touchdown percentages with Pickett being the only one with zero interceptions and saw more pressure of this group along with his third rank in points earned!

Two remaining players complete the top ten, Trubisky and Murray. They both had lower completion percentages with the former faring much stronger in the catchable results with no sacks or interceptions, while the latter provided a top five touchdown percentage.

Including the two previously mentioned 2022 prospects, seven of those 12 players had a positive EPA: Purdy (11th), Thompson (13th), Strong (14th), Coan (17th), and Willis (18th). Rudolph (22nd) is the final player since 2016 with a positive EPA. Five 2022 prospects had negative EPA results: Ridder, Crum, Eleby, and the bottom overall ranks were Howell and Corral.