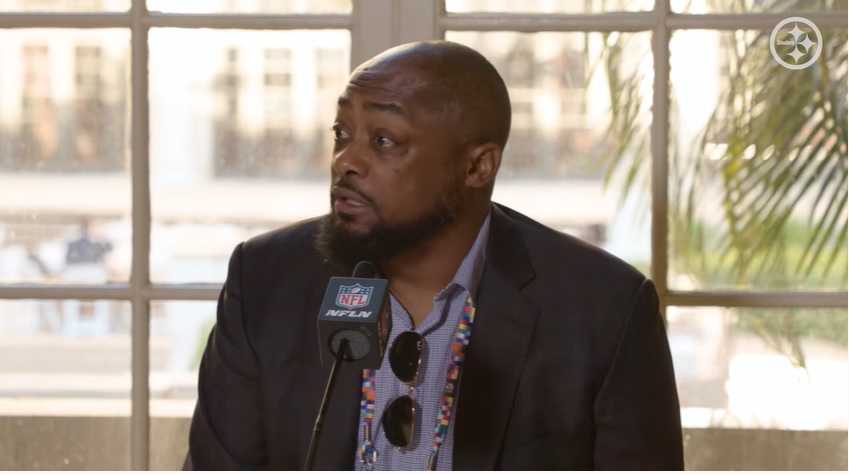 Find someone who loves you as much as Mike Tomlin loves quarterback mobility. For years, Tomlin has watched the rest of the league evolve and shift to finding quarterbacks who use their legs as an extra weapon against defenses. Now, he’s looking to join the club, already signing Mitchell Trubisky in free agency, who immediately becomes the team’s most mobile option.

Talking with reporters during the Monday owner’s meeting, Tomlin reiterated the impact QB mobility is having on run games.

“Quarterback mobility is a more significant part of the game than it’s ever been in today’s game,” he said via the team’s YouTube channel. “Matter of fact, in 2021, I think the yards per rush in the NFL was the largest it had ever been. It wasn’t because teams are running the ball more effectively. It’s because they’re utilizing the quarterback as a runner. And so now you’re playing 11 on 11 football. So do the math. Guys have to defeat blocks and make tackles in todays game to be effective at stopping the run.”

Tomlin made the comments in reference to the Steelers’ historically bad run defense in 2021, allowing a league (and franchise) high 4.99 YPC. He cited a unit unable to get off blocks and tackle as the main reasons for their struggles.

To do the math, as Tomlin suggested, offenses averaged 4.3 YPC in 2021. It wasn’t quite the historical high but it was right up there and the league’s YPC has ever-so slightly increases in recent years in part thanks to quarterbacks utilizing their speed.

A quarterback who can run also changes how a defense can play you. They may play more zone coverage, utilizing a spy and having all eyes on the quarterback instead of their back turned like man coverage. They have to be more thoughtful about blitzing, knowing if the QB breaks contain, he’ll have green grass in front of him. Mobility gives offenses more options while limiting defensive options and flexibility, the ultimate win for an offensive coaching staff.

The names the Steelers are eyeing in the draft are all mobile though to varying degrees. Liberty’s Malik Willis the most dynamic athlete, North Carolina’s Sam Howell the toughest runner, Cincinnati’s Desmond Ridder an overlooked athlete, while Pitt’s Kenny Pickett and Ole Miss’ Matt Corral are functional, sort of in that Trubisky mold. Tomlin should get his wish by the end of this year’s draft, making the Steelers’ static offense of the past look much different in 2022 and beyond.