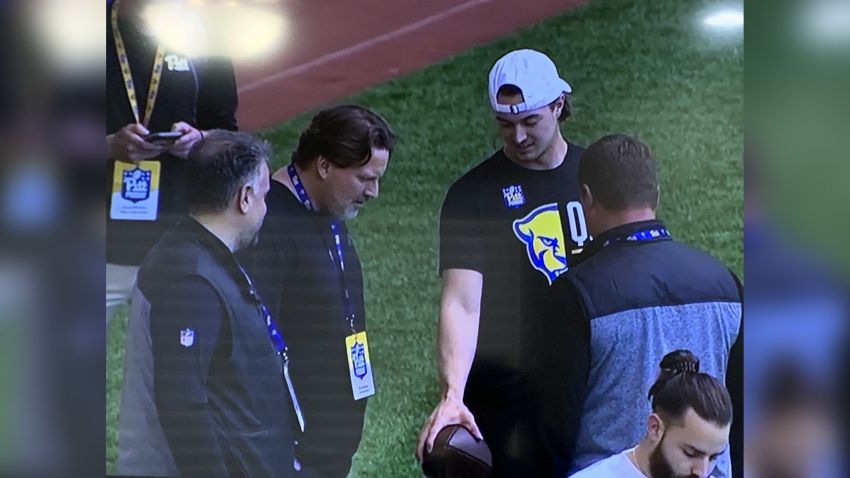 It’s been a while since the Pittsburgh Panthers had an arm that attracted as much attention as did Kenny Pickett’s at the university’s Pro Day yesterday, which the Pittsburgh Steelers, naturally, were represented extensively (though quarterbacks coach Mike Sullivan was actually on the road to eye Carson Strong).

More specifically, it was all about his hands. As you’ve surely read by now, Pickett’s hand size has been quite a source of discussion. Although teams have generally seemed not to care too much, outside commenters have certainly had their opinions, as to whether or not his relatively small hand size will be an issue at the pro level.

His hand span measured at just 8.5 inches during the NFL Scouting Combine last month. He told reporters at the time that he was doing stretching exercises to address the issue, explaining that his double-jointedness in his thumb causes it to point in an odd direction, and that his actual measurements don’t accurately represent his grip on the football.

The stretching exercises did appear to help in the measurement department, as his hands now measured ⅛ of an inch above what was measured at the Combine a month ago. That, or having your own ruler helped. It still remains among the smallest hand sizes recorded for a quarterback.

“The stretches work”, he told reporters during a media appearance at his Pro Day yesterday, according to Brooke Pryor, writing for ESPN. “It’s the reason why I’ve been doing them. If it helped getting an eighth of an inch, I’ll take it”.

Regardless of the size of his hands, Pickett is still expected to be drafted in the first round of the 2022 NFL Draft next month. Some even believe that he could be selected inside the top 10. He certainly put up college numbers.

For his career, he completed 1,045 of 1,674 pass attempts with the Panthers for 12,303 yards, throwing 81 touchdowns to 32 interceptions. During his senior season a year ago, he went 334-for-497, throwing for 4,319 yards with 42 touchdowns against seven interceptions. He’s never had a season with more than nine interceptions, though this past season stands as a stark outlier in touchdown production.

While he also rushed for 20 touchdowns—generally in short-yardage situations—it’s worth noting that he did fumble 26 times during his 52-game college career, an average of one fumble every other game. Many naturally wonder if that is an issue with his hand size.

Pickett’s efforts to increase his hand measurements are really more of a cosmetic issue at the end of the day. In a more material concern, he has also spent time working to improve his arm strength this offseason, which he believes he was able to show yesterday.

“There’s definitely different ways to work arm strength and every offseason I feel l take a leap forward in strength and agility and speed”, Pryor quotes him as saying. “It’s just how hard I train. I think all of that stuff tied in today. I was able to put the ball out there more and throw with some good velocity”.

Personally speaking, I doubt more than a very small handful (no pun intended) of teams will have any concerns about his hand size. He’ll still be one of the first quarterbacks off the board, and he is probably more ready to play than any of the others coming out this year.