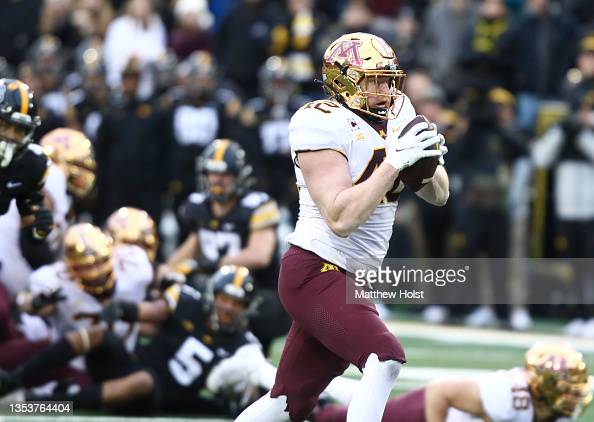 New to Steelers Depot, we will be highlighting a few less-heralded prospects at each position group in lead up to the 2022 NFL Draft that likely won’t go until Day 3, but present potential value as sleepers in the later rounds. This week we will be listing highlighting a few tight ends from a deep class that, may not have that top prospect like in years past, but still has many good options to choose from which may cause some good talent to be pushed down the board.

Cade Otton is a name that has garnered some hype inside the draft community during the pre-draft process, but isn’t a name widely known out in the general public. The 6’5″, 247 lb. redshirt junior hasn’t ever had a breakout season up in the Pacific Northwest, but part of the blame can be put on the overall offensive system that the Huskies used in not featuring their tight ends more in the passing game. When you watch Otton on tape, he is a fluid mover in space that can be a viable possession receiver over the middle of the field as well as in the red zone, having the size and catch radius to reel in grabs in contested coverage.

Otton also displays the want to and technique to be a quality blocker at the next level in combination to his receiving chops. Other TE prospects may have been more productive than Otton at the college level, potentially causing him to slide somewhere on Day 3. Still, the skill set and untapped potential are there as a receiver, as well as the tape to be a well-round traditional TE that can aid in the run game to potentially take his game to another level in the pros.

I had the distinct privilege of facing Ko Kieft in high school and let me tell you, he was a large individual back then playing QB for the Sioux Center Warriors that was difficult to bring down. However, he was a force on defense and special teams, running down on the kickoff unit and looked to decleat the first person he saw. Kieft took that same mindset to Minnesota when they moved him to TE where he bulked up to 6’5″, 265 lb. and has become one of the most physically dominant blocking TEs in all of college football.

2021 was the first season that Kieft went over 100 receiving yards on seven receptions, so he isn’t to be regarded as a dynamic receiving threat. However, what he provides as a blocker as well as a likely core special teams player should find him a spot on a roster in the later stages on Day 3 or as a UDFA that can be TE3 on a roster and impose his will in the running game on defenders with his effort and non-stop motor as a blocker. He has a similar feel to former NFL TE Lee Smith, who was never a big-time receiver but carved out a nice career for himself opening up running lanes as a plus blocker.

This TE class has been touted as one of the deeper classes we have seen in some time that may not have a Kyle Pitts of T.J. Hockenson in the group, but does have a bunch of quality prospect who can either become quality starters or serviceable TE2s. One of those guys that isn’t getting the same love as some of the other big names in this class is SDSU’s Daniel Bellinger, a 6’4 7/8”, 253 lb. senior that has been flying under the radar thus far this draft season, but tested amongst the best at the position at the NFL Combine (4.63 40, 34.5” vert, 10’5” broad).

He is coming off his best season as a receiver, but also was in a run-first offense where he was asked to block often, making him a well-rounded prospect. A Senior Bowl invite and a Combine participant, I would expect Bellinger to be selected this April, albeit later on Day 3 of the 2022 NFL Draft. Still, giving his athleticism and experience as a blocker in a run-first system, Bellinger projects as an ideal later round selection that can play as a traditional TE that has the room to develop into a nice TE2, with room for more if giving more of a role as a pass catcher.