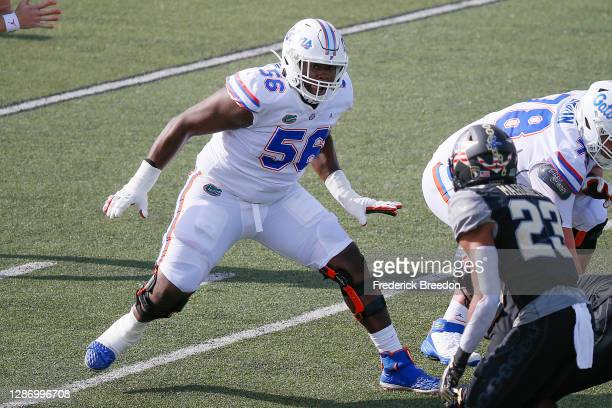 New to Steelers Depot, we will be highlighting a few less-heralded prospects at each position group in lead up to the 2022 NFL Draft that likely won’t go until Day Three, but present potential value as sleepers in the later rounds. This week we will be listing highlighting a few offensive linemen that may not be getting the same name recognition as some of their peers but have the traits to develop into quality players at the next level.

Delance started his career opting to stay in his home state, committing to the Texas Longhorns. However, he decided to transfer after his freshman season to the Gators and became a three-year starter to round out his college career, making most of his starts at RT, but also getting some action inside at guard. Delance isn’t the biggest tackle prospect out there (6’3 7/8”, 296lb), but he has phenomenal hand size (10 1/8”) and arm length (36 1/2”) that you look for in an offensive tackle.

He uses his long arms well to punch pass rushers well before they get into his frame, keeping them at a distance. Delance’s performance against Will Anderson of Alabama was particularly impressive given Anderson is seen as the best defender in the country.

Great block by Jean Delance on Will Anderson. It’s not everyday someone does this to Anderson! pic.twitter.com/uc1G4lP0Ls

Delance was snubbed of a Combine invite earlier this month but had a strong week of practices down at the Shrine Bowl in Las Vegas, impressing many scouts down there including Steelers Depot’s Josh Carney who messaged me back and forth on Delance. Showing some guard/tackle versatility, Delance figures to be a sneaky Day Three selection that could be a swing player early in his career, having the flexibility to play both inside and outside on the offensive line. Should he continue to develop using his natural athleticism and superior length to his advantage, we could see Delance earn a starting role sooner rather than later in the league.

Tom is another slightly undersized OT prospect (6’4, 304lb) that cut his teeth at the Shrine Game before traveling to Indianapolis for the NFL Combine. While in Indy, Tom impressed several scouts I talked to when it came to his personality in interviews as well as his athletic testing (4.94 40, 33” vert, 4.47 short shuttle). Tom too has the hand size (10 3/8”) and arm length (33 1/4”) to meet the benchmarks of an NFL-caliber tackle. He played against some stellar competition in the ACC, including potential top-ten pick Jermaine Johnson of Florida State, and represented himself well in those matchups as a clean pass protector.

Tom showed some position flexibility as well down in Vegas, taking snaps at center where he looked comfortable. That shouldn’t come as a surprise given the fact that the redshirt junior started 14 games at center during his first two seasons with the Demon Deacons. Being recruited as a guard and having double digit starts at center and tackle during his college career is a clear chip in Tom’s favor going forward through this draft process for teams looking for linemen that can play multiple spots in the case of injury. Tom will most likely be taken as a tackle, but can kick back inside if needed there, but Tom should make a team happy with their selection of him on Day Three.

I really like LT Zach Tom from Wake Forest. Really good with his hands, made Jermaine Johnson II switch to the other side in the 2nd half pic.twitter.com/L1t1hu2Se4

When you hear the name Lindstrom, your mind may revert to when the Atlanta Falcons decided to select Chris Lindstrom 14th overall in the 2019 NFL Draft. His younger brother, Alec, is draft-eligible this year and currently is battling to gain half of the draft buzz his older brother had. Most of the negativity surrounding Alec Lindstrom concerns his size, or lack thereof (6’3, 296lb, 32 5/8” arms, 9 1/4” hands). Watching Lindstrom at the Combine, his body makeup isn’t anything impressive either, having more of a sloppy look than your rocked-up freaks on the OL. However, Lindstrom is extremely cerebral at the center position as he constantly watches film to hone his technique to ensure he is in the right position.

Alec Lindstrom is going to start off Day 4 practice well. Watch him control and pull those hands down. Heck of a rep for the Boston College center. pic.twitter.com/hl1euUtup0

His size and lack of scheme versatility will likely cause him to slip down draft boards, being that he is a natural fit in a outside zone-heavy system with questions whether he has the body type to play in more gap/power schemes against NFL-sized nose tackles. While his size will be a knock against him, Lindstrom makes up for it with great mobility and athleticism out in space as well as the nasty demeanor to run his blocks to and through the whistle, looking to plant his opponents into the turf. For a team looking for a zone-system fit at center and not wanting to pull the trigger on Tyler Linderbaum or Cam Jurgens early, Lindstrom would be the ideal target on Day Three of the draft.

One of top center prospects in CFB – brother of Chris, now with Falcons. This kid is fun @MoveTheSticks

Lindstrom plays a physical brand of 'Bully Ball' – you're in for a fight against this OL. Always looking to finish defenders! @BigDuke50 pic.twitter.com/Xgb9QCwY0m

Another notable name that was snubbed of a Combine invite this year was Virginia Tech’s Brock Hoffman. The 6’3 1/2, 310lb redshirt senior who started his career at Coastal Carolina for two seasons, racking up 12 starts at center and 12 at right guard before sitting out the 2019 season after deciding to transfer to the Hokies. Since then, Hoffman has been a mainstay in Blacksburg on the offensive line, making 22 starts at center, one at left guard, and also showed he could kick outside to right tackle when called upon due to injury.

Unlike most centers in this draft class, Hoffman has the requisite size as well as then length (33 1/2” arms) that use desire to have in a starting-caliber center in the league. However, he hasn’t gotten the same love from scouts and the media alike due to not “excelling in one particular area”. While the ceiling may not be there for Hoffman as an athletic freak at the next level, his steady play paired with his position fluidity to play all three spots along the interior along with the capability to be a break glass option outside should intrigue teams looking for a backup option on the depth chart.

Before he got to Virginia Tech, my guy Brock Hoffman (@BrockHoffman76) was playing guard at Coastal Carolina. He was so jacked up about this pull that he thought he was Ray Lewis making an entrance lol pic.twitter.com/6wZeOeIbHw

Given his experience and his ability to get the job done, it would surprise me to see Hoffman become a spot starter down the road and potentially become a quality starter for an offensive line as a potential value selection on Day Three of the 2022 NFL Draft.

Impressed with #VirginiaTech Center Brock Hoffman, making his first few starts for the Hokies. Really solid hand placement, savvy, can get out on the perimeter and make key blocks.

Just a junior, someone who may come back for 2022, but impressed with what I've seen from him. pic.twitter.com/wYP4O7zmwE