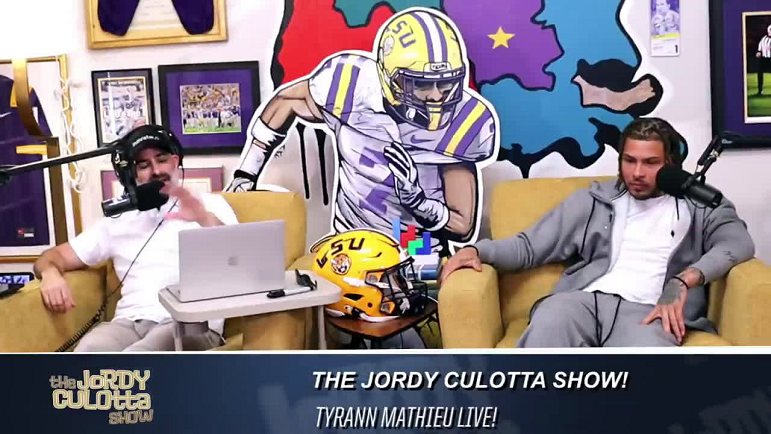 As the top safety still on the board in free agency, 29-year-old Tyrann Mathieu isn’t sweating the lack of movement for him on the market.

Instead, on his third foray into free agency, Mathieu — appearing on the Jordy Culotta Show Monday — is enjoying the process that includes being courted by a number of teams. During his 40-minute appearance on the show, Mathieu even dropped an interesting nugget regarding his free agency and the Steelers.

A tip of the cap to Brett Kostoff for passing this along to us as well. Great find.

Though reports have surfaced from the likes of NFL Network’s Aditi Kinkhabwala and the Pittsburgh Post-Gazette’s Gerry Dulac shooting down any Mathieu speculation for the black and gold, the Steelers have never publicly shut the door on adding the former All-Pro safety. Mathieu’s comments Monday seem to back that up, stating that it’s been cool throughout the free agency process to hear from coaches, including Steelers’ head coach Mike Tomlin.

“I’m really just kind of taking it easy. Like I said, just kind of enjoying the time with family and you know, my fiance’, you know what I mean?” Mathieu said regarding the free agency process taking longer than expected for him. “Because like I’m a real football dude, so it’s like, once I know I’m playing and once I know where I’m going, it’s over. Like you can catch me on the flip side. Yeah. I’m about to put my helmet on. I need my playbook, send me the iPad…so I can get to work, you know what I mean?

“I mean, just being able to have this time with family though, it’s cool. But I still try to enjoy the process. It’s still cool talking to all coaches, the different coaches, cause some of these guys… Mike Tomlin calling your phone,” Mathieu added. “He like, ‘Hey, oh, this Mike T’ you know, so just being able to talk to these guys, man, it’s a blessing too. And even some of these guys, you able to kind of get certain experiences from them and, and you know, some of these men are open when they call you. So it is good, man.”

It shouldn’t really comes as a surprise that Tomlin reached out to Mathieu directly, especially as the star safety’s free agency period drags on, potentially lowering his cost overall, which could give the Steelers a chance to pounce on an opportunity that presents itself. Of course, Tomlin has praised Mathieu throughout his career, calling him one of the better defensive backs in the game due to his versatility wearing multiple hats.

The Steelers were also reportedly eyeing the safety market and had three players in mind in Mathieu, Terrell Edmunds, and Damontae Kazee, according to ESPN’s Jeremy Fowler in mid-March. All three remain unsigned, giving the Steelers some flexibility overall.

Mathieu is coming off of his fourth contract and is in his third trip into free agency, making him a tough fit into that criteria for the Steelers overall. However, that doesn’t rule him out entirely. In fact, Mathieu also stated what he’s looking for in his next landing spot, which is a good group of guys and a strong leadership presence.

“From a leadership perspective, you obviously want to be a part of a good group of guys, you know what I mean?” Mathieu said. “You want to be able to work well with these guys. I mean, these are guys that you spend a good part of your life with once you sign a contract — hours and hours on end. So you want to be a part of a good group and then, too, I think I’ve been spoiled. I’ve always been around guys like Larry Fitzgerald, Patrick Peterson, JJ Watt. So it’s like if you ain’t got those guys in the room, I don’t know if I fit in the room. So, obviously, you look for that and then you want to win, man. It’s all about being able to compete Thursday night, Monday night, Sunday night, Saturday night, Week 1, Super Bowl. You just want to have a chance to win the game.”

Though it still remains a bit of a long shot to sign Mathieu, the Steelers still have plenty of cap space overall to make such a move work, and the longer Mathieu sits on the open market, the lower is cost will be. That’s just typically how things work out in free agency. At this point in the process — barring injury elsewhere — Mathieu would be hard-pressed to find a better situation to step into than Pittsburgh’s defense.