Things sure have slowed down quite a bit when it comes to the Pittsburgh steelers in free agency. With that, and with a few more contract details being reported to the NFLPA on Tuesday. Wednesday is a great day to pass along the Steelers salary cap situation and especially with so much misinformation being passed along on other team blogs these past few days.

According to the NFLPA on Wednesday morning, the Steelers are $16,590,917 under the cap with 70 players under contract. That updated number came after the contracts of quarterback Mitch Trubisky, offensive lineman Mason Cole and cornerback Levi Wallace all hit the NFLPA page on Tuesday. There are still three contracts that have yet to hit the NFLPA site, however, and they belong to defensive tackle Montravius Adams, cornerback Ahkello Witherspoon and wide receiver Gunner Olsheski. While those three contracts are still outstanding, it’s not hard to closely project the 2022 cap charges of each.

As you can see in the updated graphic below, the Steelers are now estimated to be $13,425,917 under the cap in real-time. That is with all 73 players accounted for heading into Wednesday and all releases processed.

There is still no word on the contract of defensive tackle Cameron Heyward being restructured as of Wednesday morning. If the NFLPA update does not reflect a restructure by Friday, it’s a good bet the Steelers left his contract alone. If Heyward’s contract was left alone, you can count on the Steelers heavily restructuring the contract of outside linebacker T.J. Watt later in the offseason, and likely after training camp gets underway.

Also in the graphic are projected future costs the Steelers can expect to incur as we move further along into the offseason. A you can see; the Steelers now need less than $3 million to accommodate their currently scheduled draft selections. I point this out because of what known hack Justin McGonigle wrote on his Steeler Nation site a few days ago, one day after my last salary cap update.

“… but they need roughly $8 million to sign their rookie class,” McGonigle foolishly wrote.

The above is what happens when you steal the work of others and try to present it like you fully understand it. McGonigle has been ripping off Steelers Depot content for years, so it’s time to let our readers know the truth. He’s a hack, as are most of the people who contribute to that site. If that offends any of you, no apologies from me. We have the evidence stored to back that claim up.

The reason the Steelers only need less than $3 million for their 2022 draft picks at this point is because of top 51 roster displacement. Currently four of those rookie deals won’t even fully enter the Steelers Rule of 51, only the prorated bonus portion of the deal will.

Once again, the Steelers are in great shape from a salary cap predestine and there is nothing to really prevent them from signing a few more outside free agents and a few of their own as well. They can even afford safety Tyrann Mathieu on a two-year contract that matches the one the inside linebacker Myles Jack just recently signed with the team. 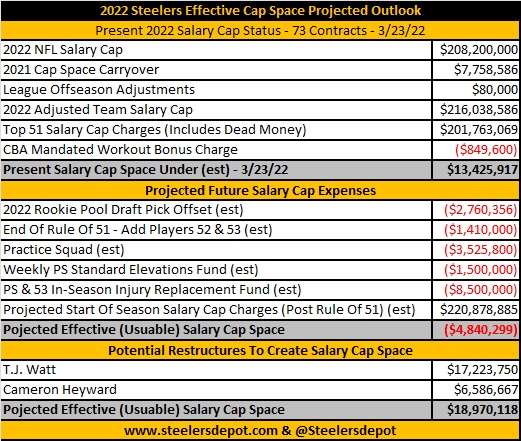