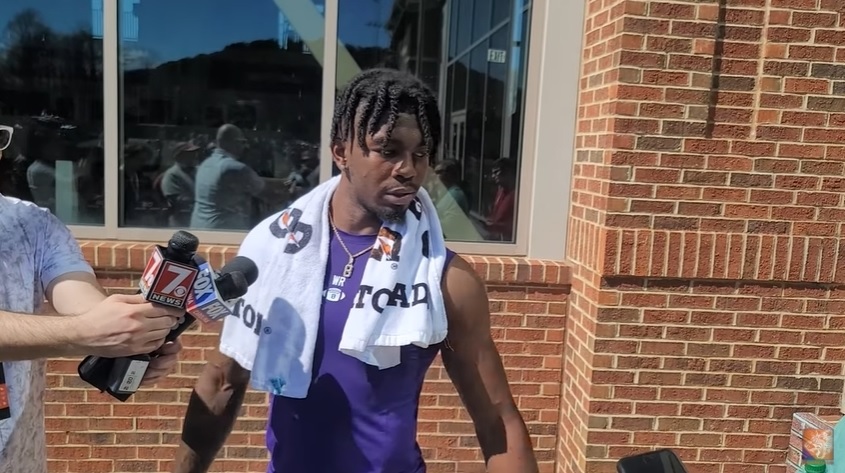 The Pittsburgh Steelers are almost certain to draft a WR in this year’s draft. And that man could be Clemson’s Justyn Ross. One day after taking a long look at Georgia wideout George Pickens, the Steelers did the same with Ross during his Pro Day workout Thursday.

Steelers’ wide receivers coach Frisman Jackson followed Mike Tomlin, Kevin Colbert, and Brian Flores to the Tigers’ workout. And it was Jackson who put Ross through his workout.

The YouTube channel Film Room Scouting put together a cut-up of Ross’ workout, showing Jackson taking him through his routes.

After the day, Ross said the Steelers were one of the two teams that showed the most interest in him.

“I’ve been talking tot he Steelers a lot,” he told reporters in his post-workout interview. “Been talking to the Raiders a little bit too.”

Ross was then asked for his impressions of Mike Tomlin.

Ross burst onto the scene in college football, starring as a freshman and sophomore. He averaged over 21 yards per catch his first year with Clemson before following that up with a 66-catch sophomore season, finding the end zone eight times.

But in March of 2020, Ross suffered a stinger injury. That led doctors to discover a bigger issue, an X-Ray revealing a congenital fusion condition of his neck and spine that ultimately required surgery. Doctors believe Ross was born with the condition and led to a history of stinger injuries. He missed the entire 2020 as a result but returned in 2021. Missing a year and without star QB Trevor Lawrence, Ross’ production sunk, catching 46 passes for just 514 yards and three touchdowns, career-lows across the board.

His Pro Day workout showed him healthy but his numbers were middling, reportedly running in the mid 4.5’s and jumping just 31.5 inches in the vertical. He possesses good size at 6’3″, 205 pounds and told reporters teams primarily view him as an outside receiver, though he’s played in the slot before, too. Ross is viewed as a Day 2 pick, potentially going in the second round, though a deep receiver class coupled with Ross’ negatives may push him into the third round.

For Pittsburgh, Georgia’s Pickens may be the more attractive option. But it’s clear the team is doing plenty of homework on Ross and the position and are more likely than not to add a receiver before Day 2 of the NFL draft concludes. Look for a report on Ross in the near future.