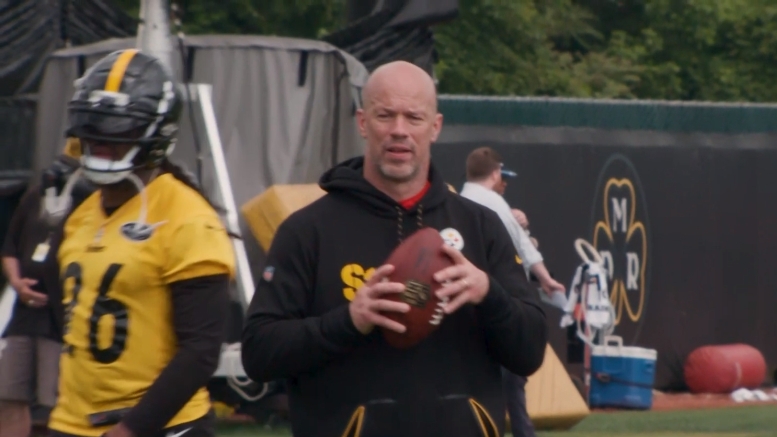 The Pittsburgh Steelers as an organization have one of the deepest and most significant histories with respect to the advancement of the craft of scouting. I need only remind that the S in the BLESTO organization stands for Steelers. Many of their personnel have been mainstays, as well, of the NFL Scouting Combine, including helping to run drills.

Steelers linebackers coach Jerry Olsavsky has been one of them, and he was back out there in Indianapolis yesterday, working with the EDGE prospects, as Alex Kozora observed. This is largely significant only because there had been some speculation about his role and future.

As you hopefully remember, the veteran coach suffered a tragic personal loss during the season in 2021, with the passing of his wife. The organization reported that he would spend some time away from the team. Though they never made any kind of statement about his return, he had been spotted on the sidelines (or presumed to have been spotted).

When the team announced the hiring of Brian Flores as a senior defensive assistant who would be working with the team’s linebackers, it renewed some questions that people had about how that would work with Olsavsky, who had always retained his position on the site’s coaching staff page, even when updated after the Flores hire.

This at least offers confirmation following that hire that Olsavsky is indeed retaining his previous role. There was never any reason to think that that would not be the case, but without clarification from the team, it was still something that was being discussed with a lack of certainty.

Head coach Mike Tomlin fired hired Olsavsky on as a coaching assistant in 2010, in which capacity he assisted all three phases of the game. He was formally promoted to his current role of inside linebackers coach in 2015, which he has retained since then.

The Pitt graduate was originally drafted as a linebacker by the Steelers in 1989, where he played through the 1997 season. He started 37 of 117 career games with 232 tackles, an interception, four forced fumbles, and a fumble recovery, as well as two and a half sacks.

Including his time as a coaching assistant, he is the second-longest-tenured member of Tomlin’s current staff behind John Mitchell, following the retirement of former defensive coordinator Keith Butler. Special teams coordinator Danny Smith has been in his current position longer than Olsavsky has been in his, by two years, first hired in 2013.

As far as the Flores hire goes, there is likely an understanding on both sides that this will probably be a one-year relationship, as there is a very good chance that he ends up with another head coaching opportunity, or a coordinator role, in 2023.