The Pittsburgh Steelers officially announced the singing of cornerback Ahkello Witherspoon to a two-year contract on Friday and with that, we now have a real good picture of where the team currently sits at from a salary cap perspective.

While the exact numbers of the Witherspoon deal aren’t yet available, the deal is reported to total out at $8 million. Because of that, it’s a good bet that Witherspoon’s contract looks exactly like the one that cornerback Levi Wallace signed with the team. That’s the assumption I am rolling with until I hear otherwise. Wetherspoon’s contract isn’t likely to hit the NFLPA until Monday or Tuesday.

Assuming Witherspoon’s contract matches the one Wallace signed, that would result in the Steelers being $13,408,417 under the cap with nothing outstanding. While that’s not enough salary cap space to handle future costs the team will have moving past free agency, it is enough room to make several more signings with.

Realistically, we could see the Steelers still sign a veteran wide receiver and safety in the next few weeks. We might also see the team continue to re-sign a few of their own unrestricted free agents between now and the draft. I would look for outside linebacker Taco Charlton as possibly being one of those players. In short, the Steelers have room to work with when it comes to what still remains in free agency.

Obviously, the Steelers will still have future costs they will need to accommodate. Restructuring the contract of outside linebacker T.J. Watt should easily accommodate those future costs. The team might not even need to do a full restructure on Watt to boot.

With the week now closing out, we still have not heard about the Steelers restructuring the contract of defensive tackle Cameron Heyward prior to them paying him his $4.5 million roster bonus. At this point, it’s probably safe to assume that Heyward’s contract won’t be touched this offseason barring the team needing emergency salary cap space. assuming Heyward’s roster bonus was paid on time and assuming no restructure was done, a future restructure later in the summer would only clear $3,586,666.67 in 2022 salary cap space.

So, just how much salary cap space have the Steelers used so far this offseason after making their signings and cuts? Well, the team was $28,829,229 under the cap on March 10 when the workout placeholder charge hit. Since then, the team has issued three restricted tenders, one exclusive rights tender. Additionally, the team has re-signed five of their own unrestricted free agents and signed six outside free agents. The team has also terminated the contracts of two players. With the team now estimated to be $13,408,417 under the cap, just $15,420,812 in salary cap space has been used after all roster displacements have taken place.

Below is my most current breakdown of the Steelers salary cap situation as of Friday night. Included in that breakdown is an updated look at estimated forthcoming costs the team will have. 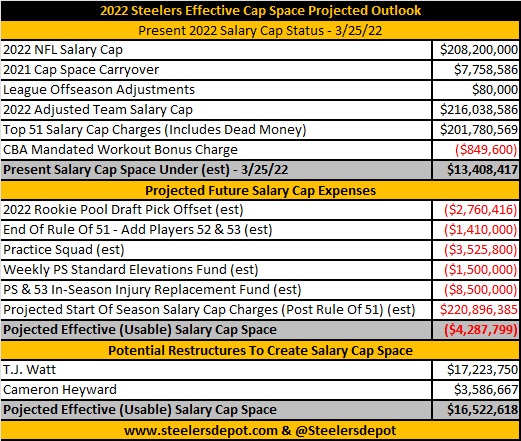