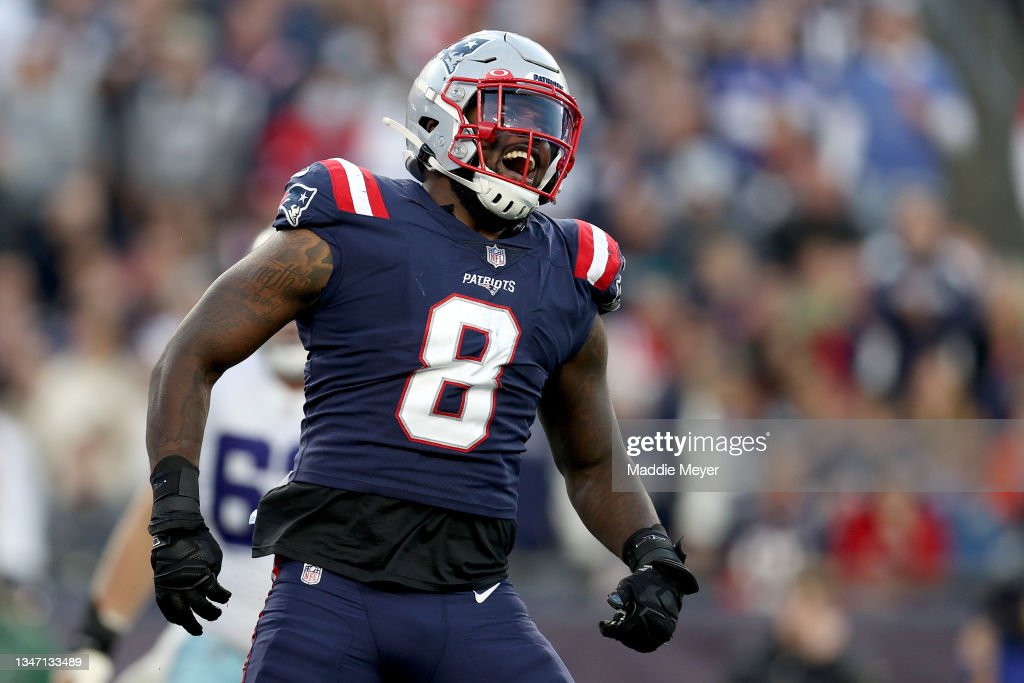 The 2022 NFL year begins Wednesday, March 16th with the legal tampering period opening up Monday the 14th. And for once, the Pittsburgh Steelers have some money to spend. Don’t expect them to toss around massive, $80 million contracts but they should be more aggressive than in season’s past. It makes this year’s free agency wishlist a little more interesting than past offseasons, especially with the uncertainty at quarterback.

Below is my list of best fits, talent, and the guys who just make the most amount of sense to come to Pittsburgh on the defensive side of the ball. There’s a variety on this list, bigger names and more economical options for you guys to digest.

As I know you will, let me know your thoughts and other players you’d suggest in the comments below. If you missed it, be sure to check out my offensive free agent wishlist released Thursday.

I’ll admit I didn’t get a chance to study defensive linemen like I had hoped but I would be remiss if I didn’t at least suggest a couple of them given Stephon Tuitt’s uncertainty and the team’s seemingly high number of formal interviews of d-linemen at the Combine.

Nichols won’t turn 26 until September and has showed some pass rush ability with eight sacks over his last two years as a backup, rotational lineman for the Bears. He was a plus athlete coming out of Delaware, running a 4.95 at 306 pounds at the 2018 Combine. He’s nearly 6’4, 306 pounds with almost 33 1/2 inch arms, making him a good scheme fit who could play in nickel and rush the passer, an area where promising rookie Isaiahh Loudermilk has struggled.

Nichols may cost a little bit of money but if Tuitt isn’t coming back, Pittsburgh may be more aggressive addressing the position.

More pedigree meets opportunity meets cost. Like Tyson Alualu years ago, Bryan is a former Jaguars’ first round pick, going 29th overall in the 2018 draft. He hasn’t met that value with just 5.5 career sacks but did have two in 2021 in just 299 total defensive snaps. Both sacks came against the Bills in Week 9 but it was something positive, at least.

He’s a solid height/weight fit for the Steelers though he lacks ideal length to play out on the edges as a 4i/5 tech. But with how much the Steelers play their guys shaded inside these days, it’s a little less of an issue and Bryan could be a #5 gameday defensive lineman to rotate in for 15-20 snaps per game. He also just turned 26 today.

I try not to re-use names from past free agency wishlists because I don’t want to be that guy shouting about John Simon for five straight seasons (that was totally me, by the way – and I got my redemption!). Biegel was on my list a year ago but it’s too easy to connect the dots here.

Every free agency list is legally obligated to have some sort of Brian Flores connection on here and this is (one) of mine. Biegel barely saw time on defense after missing the entire 2020 season due to a torn Achilles. But he saw work on special teams and will be had for cheap, probably around the league minimum. Backup depth on the EDGE, especially if Taco Charlton is not re-signed.

The other Brian Flores’ connection. Many have pointed to Dont’a Hightower and no doubt, those dots connect. Not just for Flores but the Steelers own interest, from nearly drafting him back in 2012 to almost signing him in free agency years ago. Josh Carney has rightly pointed out the possibility of Miami’s Elandon Roberts, too but Bentley is my guy. Drafted in 2018 by the Pats when Flores was on-staff as the team’s linebackers coach. Flores praised him for his football IQ and how quickly he picked up the playbook.

Pittsburgh sorely missed Vince Williams last season, whose sudden retirement was one reason why the defense struggled to find stability. Bentley is a lot like Williams but in a bigger package. At 255 pounds, Bentley is a forceful, downhill player who has served as the Pats’ starter the last two years. He’s been productive over that spam with 200 total tackles (eight for a loss), with three forced fumbles and 2.5 sacks.

Watching the tape on Bentley, I saw a linebacker with size, violence, physicality, who defeats blocks routinely in the run game. He’s not going to offer much in coverage and was routinely taken off the field on third down and most obvious passing situations. At 255 pounds, you know what you’re signing up for.

There’s an argument to be made that Bentley isn’t that much different than Robert Spillane but he is better than Spillane. And there’s value in “better than” too as opposed to a stylistically different type of linebacker. Goal number one for the Steelers’ inside linebackers and defense in general is to get better against the run. Bentley will do that. So Pittsburgh should be interested.

Fair bit of dot-connecting here like many have done with Hightower. But Evans may be the better option. He’s certainly younger. Pittsburgh reportedly intended to draft him in 2018 until the Titans took him six spots ahead. Evans is now available after an NFL career that probably hasn’t met those Top 25 expectations. But he certainly hasn’t been a bad player. He’s a well-rounded linebacker who doesn’t do any one thing well but isn’t a liability in any aspect of his game, either. He can run, cover, and generally stay cleans in the run game. He doesn’t produce a ton of splash plays but he racks up tackles and is an all-around solid, linebacker, though I think the goal would be for Devin Bush to still be the three-down linebacker in 2022. Evans didn’t play much on passing downs last year.

He’s only 26 years old and is one of those pre-draft/pedigree guys the Steelers always gravitate towards.

Third name on the list of the off-ball linebackers. And all three are different style players. Bentley is the thumper, Evans is the well-rounded one, and Anzalone is more of the cover guy. A high-cut linebacker out of Florida who struggled with injuries, he’s had a bit better luck in the NFL, largely available and healthy the last two seasons.

He has issues against the run and yes, that may really hinder his chances of joining a Steelers’ team needing to get better against the ground game, but he’s a strong cover linebacker. His seven pass deflections were tied fourth-most of any linebacker last season and he’s an impressive underneath zone dropper, consistently getting his hands in throwing lanes. He’s an above average athlete with sideline-to-sideline range who shouldn’t break the bank. He needs to show more play strength against the run but if Pittsburgh thinks a much-improved defensive line can solve the run-game woes, then Anzalone makes more sense.

Lots of other names here. Hightower is easy to connect, Jewell was a good linebacker before getting hurt early in 2021, LVE has some draft connections, and I’ve always been a fan of Bynes.

Corner has been a tricky list to try and find a name that seems to fit and work. Tampa Bay’s Carlton Davis would be a strong add and #1, shutdown corner to deal with Ja’Marr Chase two times a year (and the Browns are probably going to take big swings at WR this offseason). Davis’ price tag, even for a Steelers’ team with money to afford him, may be an issue.

Young recently came on the market after being released by the Ravens Wednesday, meaning he can sign immediately with any team. Health has been a big problem for him and from 2019 to 2020, he only appeared in two games. But he returned last season and played in all 17. He made an impact downhill with four of his 35 tackles going for a loss along with two sacks. That type of physical slot corner is what the Steelers have been searching for since losing Mike Hilton and is the reason why they took a flier on Arthur Maulet.

Young is about to turn 28 and should be pretty affordable. Tre Norwood played well as a rookie and should have a home in this defense but Young would be competition and some injury insurance that gives the defense flexibility.

Callahan is another slot option but has struggled with health. Pittsburgh had interest in Roby, even apparently offering him a contract, before giving one to Steven Nelson.

Whitehead has been on my radar for a little bit and his name has reportedly been connected with the Steelers. It’s an easy projection. He played at Pitt and grew up in the area, from Aliquippa and attending Central Valley HS.. Returning home makes a lot of sense if the team is unable to re-sign Terrell Edmunds.

Whitehead isn’t as big or yoked up the way Edmunds is, he has a skinnier lower half, but he brings a similar amount of energy and hit-power. He’s also a bit better in coverage than Edmunds in terms of his ball skills and overall angles.

Not turning 25 until next week, Whitehead – like Edmunds – has played a lot of football with 55 career starts in his four-year career. He’d be an excellent replacement, and arguably an upgrade, over Edmunds.

Elliott has been discussed a lot less than Whitehead but also makes a fair amount of sense for similar reasons. He’s not from the area but the Steelers know him well as a divisional foe. He started 16 games in 2020 before having his 2021 year cut short due to a torn pectoral/bicep. That would decrease his cost and make for a bargain signing.

Our scouting report back in 2018 noted his versatility, close and tackling ability, and his Power 5 production. Elliott may offer the defense more flexibility. With Edmunds such a near the LOS player, the Steelers have had to be creative with how they can move around Minkah Fitzpatrick so he’s not always the post/deep safety quarterbacks simply throw away from.