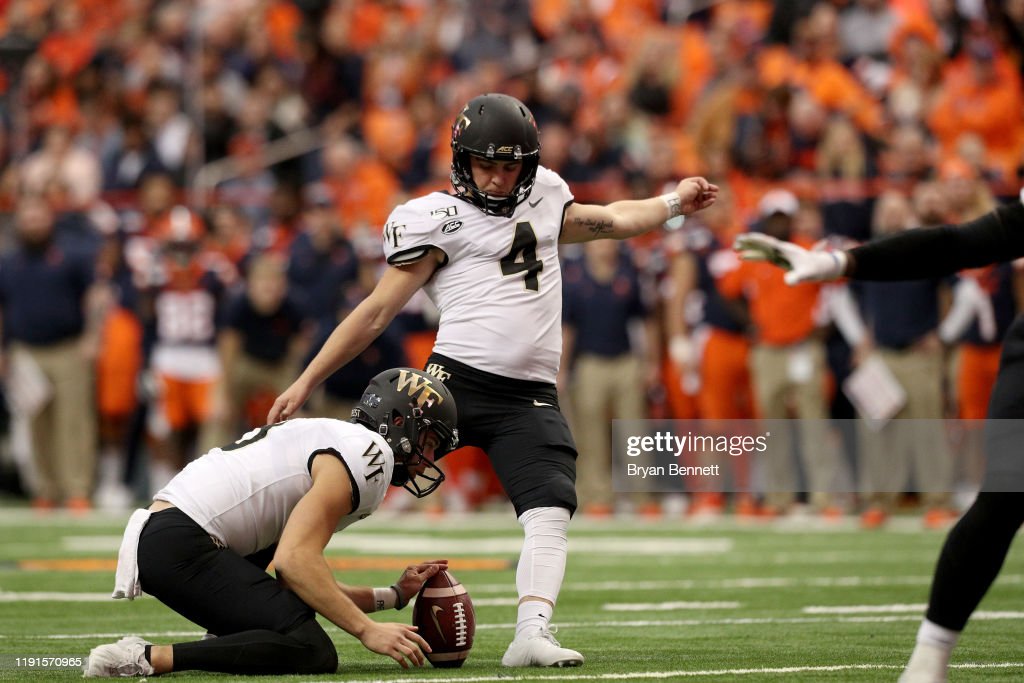 If you’re like me, you’ve been wondering what Danny Smith has been up to this offseason (ok, maybe you’re not like me). Pro Day visits for Steelers’ coordinators and positional coaches have been relatively quiet this season. But we found at least one stop Smith has made this year, appearing at Wake Forest’s Pro Day Wednesday.

He was joined by Dan Rooney Jr., who we noted in our Pro Day tracker yesterday. As my tweet indicates, the Demon Deacons have one true specialist eligible for this year’s draft in kicker Nick Sciba. He’s coming off an impressive 2021 season, connecting on 23 of his 25 field goals and nailing all 65 of his extra points. An extremely accurate kicker, Sciba never missed an extra point in his career and hit 89.9% of his career field goals, 80/89. Sciba set the NCAA record for most consecutive made field goals, at one point making 34 straight.

A photo from the Winston-Salem Journal’s gallery of the Pro Day shows Smith putting Sciba through his workout.

His most memorable moment though came as a freshman when he forgot (or wasn’t sent) onto the field with the rest of the field goal unit. Sciba rushed onto the field and missed his 37-yard attempt. Luckily, things got a lot better since then.

Clearly, the Steelers don’t have a need for a kicker. Chris Boswell is one of the best, and most underrated, in football. But Pittsburgh is at least taking a look at a guy like Sciba as a potential camp add. The team usually has two kickers on its offseason roster. Currently, the other kicker on the roster is Sam Sloman.

But Sciba might not have been the only player Smith was watching. DB Ja’Sir Taylor had a kickoff returned for a touchdown last season in the team’s opening win against Old Dominion, an impressive tackle-breaking 99-yard run-back. For some reason, he had just six kick returns the rest of the season, and none after October 9th. Taylor is viewed as a UDFA candidate.