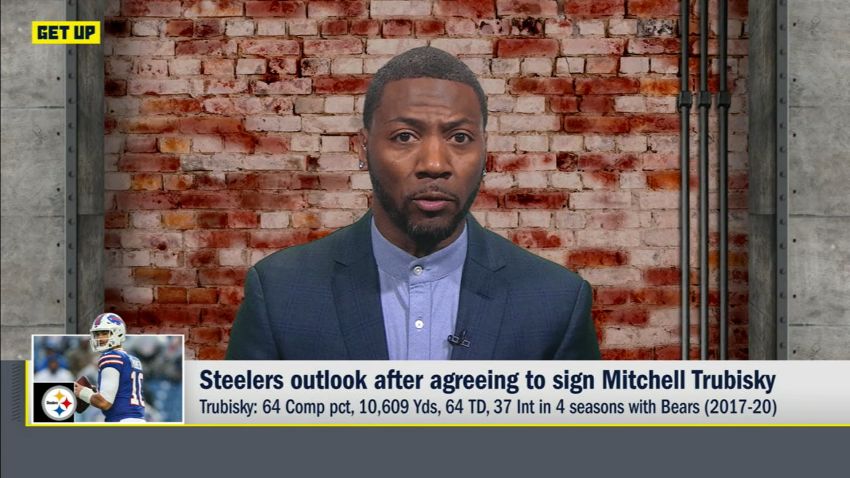 Every time there is anything to talk about relating to the Pittsburgh Steelers, ESPN is going to put a microphone in front of Ryan Clark’s face, because they know they’re going to get a soundbite out of it. The former Steelers safety was always a media personality, even during his playing days, and he certainly hasn’t been shy about sharing his views on his old team since formally transitioning into the media.

Earlier this offseason, he was highly critical of comments made by the likes of general manager Kevin Colbert that seemed to allude to the fact that, should they fail to be able to address the quarterback position this offseason in the manner they would like, following Ben Roethlisberger’s retirement, they would be comfortable going into the season with Mason Rudolph as their starter.

Since then, he has gone on to endorse virtually any alternative, including trading for Jimmy Garoppolo. Following the news that the team intends to sign Mitchell Trubisky, he sounded a different tone and praised Colbert and his former team for the move, during a segment on the Get Up program:

This is a guy that went to the playoffs two times with the Chicago Bears. Do I think that he’s a world-beater; do I think he solves all the Pittsburgh Steelers’ problems offensively? I absolutely don’t. But I do think that he’s an upgrade, not only over Mason Rudolph, but Ben Roethlisberger as well at the point in his career he was before he retired.

This is a very smart move for the Pittsburgh Steelers. If you can get him to play at the top of his potential, you get a quarterback that’s above being a good quarterback, and you also get to play football the way you want to, which is run the ball, have a quarterback with some mobility that can extend plays, and put pressure on people defensively. This is a move that I feel that Kevin Colbert, on his way out, made a great decision in signing Mitchell Trubisky.

Of course, the Steelers are going to frame it as a competition throughout much of the offseason, most likely, though Trubisky may be the heavy favorite in terms of snaps, justified by the fact that he is the new guy who has to learn the system.

It feels incredibly unlikely that he comes in and dresses as Rudolph’s backup in 2022, however. What we don’t know yet is if they will draft a quarterback. If they do, there’s a good chance that that rookie has a redshirt year, but could be set up to start in 2023. Especially if that quarterback is Malik Willis.