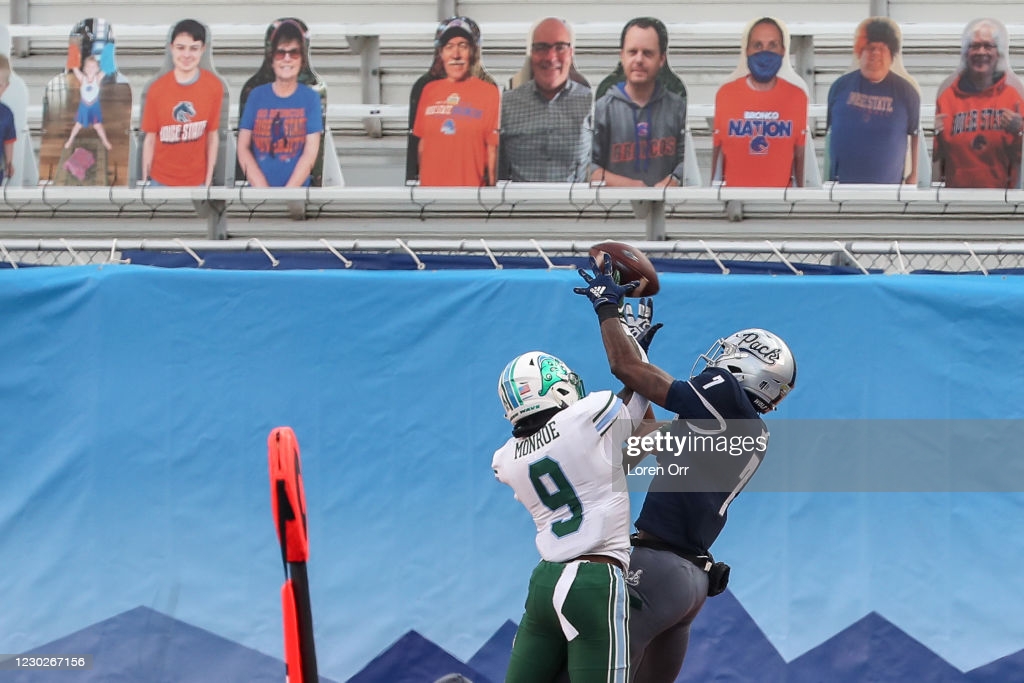 While waiting for the bevy of quarterbacks to take the podium for interviews on the second day at the NFL Combine in Indianapolis, I spotted Nevada WR Romeo Doubs take the stand with very few around him to ask him questions. I decided to run over there prior to the big-name QBs coming in and pose a couple of questions to Doubs regarding his growth as a WR this past season.

JH: Romeo, talk a little bit about your growth as a receiver from 2020 to 2021 and just how you grew as a route runner and in terms of creating separation. Obviously, speed being the name of your game, but also just your utilization around the formation how you grew as an overall wide receiver.

RD: I think growing as a wide receiver, it came from a lot of experience, you know, a lot of film study, just being able to watch other guys and what fits them at the professional level as well a collegiate level. So, I would just say just being able to study a lot more and take as much information I can from other receivers to be able to perfect my game.

JH: Who are some receivers that you have studied in the past either at the collegiate or at the professional level that you like to take bits and pieces of your game from?

RD: I watch a lot of A.J. Green man. A.J. Green, he’s a big dude with amazing feet and can run you know, and I see myself as that same exact receiver so even watching film of him, whether it fits him at Georgia or playing for the Bengals, you know, I try to learn and watch more just to get a little bit of information about him so I can be able to perfect my game.

When Doubs responded back saying that he liked to study and compare his game to that of A.J. Green, I came away initially surprised. However, after looking at it more, I could understand why he saw Green as a player he thought he could model his game after. Green measured in at 6’3 5/8″, 211 lbs. at the NFL Combine back in 2011, and while Doubs was listed at 6’2″, 200 lbs. on the team website, he does carry a long, strong build like he mentioned as a “big dude”. Both receivers have shown the ability to win down the field and attack defenses vertically, while also showing similar route running prowess for their respective size.

Doubs also carries a mind-mannered, reserved personality which is also similar to Green in the amount I have seen of him in interviews and on television, so a similarity can be made from a personality perspective as well. He was proclaimed an “anti-diva” by his coaches at Nevada, being an extremely humble, grounded young man.

Since I have Doubs’ time, I also asked him about the Steelers and any potential interviews he may have with them coming up.

RD: I spoke with Mike Tomlin at the Senior Bowl. It was a great conversation with him. You know, he’s a great guy, great head coach. One of the best coaches in a game, you know, and I just think that what he’s doing with the Pittsburgh Steelers from the time he got there, even currently right now, I think he’s doing amazing job so it’s awesome man.

So, while Doubs didn’t confirm a formal meeting with the Steelers at the combine, he did reiterate that he talked with Tomlin at the Senior Bowl, as he told Alex Kozora during our time in Mobile. He really expressed his appreciation for Tomlin as a coach and his remarks definitely say something for the impact his conversation had on him a few weeks ago. Many players I interviewed, too, have had glowing interviews about Mike Tomlin and the potential of playing for the Pittsburgh Steelers, but given his sincerity behind his response, part of me thinks he could envision himself donning the black and gold in Pittsburgh.

What are your thoughts of Romeo Doubs’ interview? Do you think there are noticeable similarities between his game and that of A.J. Green who he likes to study? Do you think that Doubs would be a good fit in Pittsburgh with the Steelers based on his skill set? Please leave your thoughts in the comments section below and thanks again for reading!