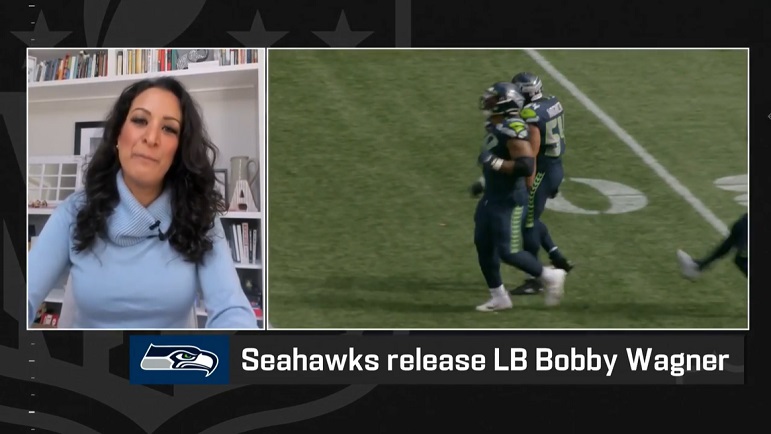 There are a lot of veteran players becoming street free agents ahead of the start of the 2022 NFL league year next Wednesday, and that’s not a bit surprising as it’s par for the course. A few days ago, veteran inside linebacker Bobby Wagner was cut by the Seattle Seahawks and that move resulted in several fans of the Pittsburgh Steelers foaming at the mouth. With Wagner now on the street, there has been a lot of hope from the fanbase that the Steelers will sign Wagner. On Thursday, Aditi Kinkhabwala of the NFL Network had a little bit to say when it comes to Wagner and the possibility of him landing with the Steelers this offseason.

“The Steelers also need to do something to shore up their inside linebackers,” Kinkhabwala said Thursday on the NFL Network. “A name that we’re hearing thrown around a lot right now is Bobby Wagner. I, in fact, texted with a coach yesterday and said that I really think that would be a great idea to bring him to town. And he said, ‘when have you ever stopped telling me what you think?'”

So, what does this even mean? Okay, Kinkhabwala texted a coach to give her input. Does that constitute the Steelers throwing Wagner’s name or around, or just her? Kind of seems like an irresponsible way to frame all of this, right? I don’t think you would ever see someone like Will Graves from the Associated Press frame a report like this. Just saying. Kinkhabwala then tweeted out something about Wagner below that included her own thoughts on the matter.

Let's just put this out there: the quickest way to get the #Steelers inside LBs to look and play better? Getting Tyson Alualu and Stephon Tuitt back up front to help Cam Heyward.
(But yes: I would love to see Bobby Wagner in PIT. Would love to see Devin Bush learn from him.)

After Kinkhabwala tweeted the above out, I pressed her on her report and really got nowhere with it, as her response was a vague word salad, much like the TV report was. See below.

From what I am being told, the Steelers (as always) concertedly investigate all options. But…for as athletic as Wagner is, he may not be as aggressively physical as the team previously liked its ILBs to be. The question here is: is the defense changing some? That I don’t know.

Right after Kinkhabwala’s report surfaced, Jordan Schultz decided to hop in with a report of his own. I have to be honest; I really don’t know who he is and where he came from but he does have verified account, so there’s that. Schultz claims the Steelers are indeed interested in Wagner, along with several other teams.

A league source just told me the #Steelers are also interested in Bobby Wagner. Add another AFC team with $30M in cap to the list of potential suitors.

Look, Wagner is a fine linebacker and has been for a long time. He is sure to have a thick market now that he is on the street. He is also on the wrong side of 30. If you’ve followed the Steelers since 2000, you know they don’t have much of a history when it comes to signing players 31 years of age or older, and who have never played for the team before, to multi-year contracts for more than the minimum. The list is real, real short. It’s pretty much Mike Jones and Melvin Ingram at this point.

Does Tomlin think a lot of Wagner? Absolutely he does. Just go back to last season before the Steelers played the Seahawks.

“Bobby Wagner, their man in the middle: All situations linebacker; has been that for them for over a decade,” Tomlin said last season ahead of the Steelers playing the Seahawks. “Got a lot of respect for his body of work and his business, his detail, his communication, his leadership. It’s all very evident when you watch their tape. So much of it goes through him. He provides great fluidity for those guys. Very rarely are they collectively out of place, and I think it starts with him.”

Now, Tomlin does talk glowingly about a lot of players on opposing teams during a season, so take that quote for whatever it’s worth.

Personally, I think Wagner’s best fit might be with the Dallas Cowboys, given their defensive coordinator is Dan Quinn. He was Wagner’s defensive coordinator from 2013 to 2014 with the Seahawks. Per NFL insider Ed Werder, Quinn considers Wagner the greatest linebacker he’s ever coached. Werder expects Quinn will encourage Dallas to sign Wagner.

We’ll see how this ends up with Wagner. Personally, I will be a bit surprised if Wagner signs with the Steelers.