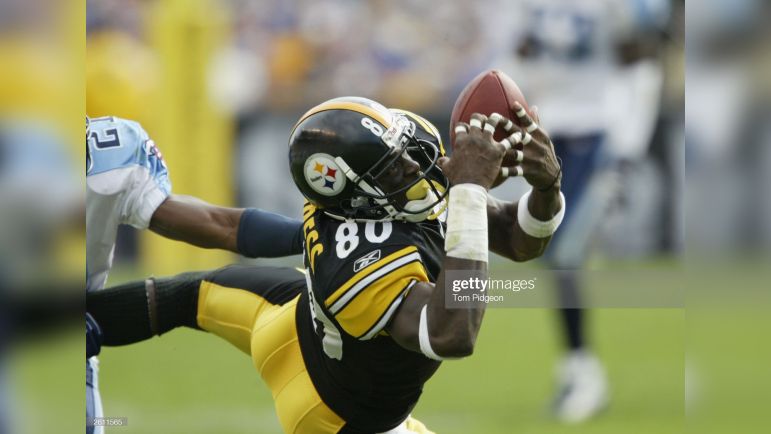 The Pittsburgh Steelers are not a team that throws a lot of big contracts at wide receivers. There was, of course, Antonio Brown, and before him, Hines Ward had a very long career here. Others tend to have short stays, no matter how good they were, although sometimes there are extraneous factors involved.

The one that got away, though was Plaxico Burress, their first-round pick in 2000, who left for the New York Giants in free agency after the 2004 season. The general belief was that Pittsburgh opted to re-sign Ward, and thus not to re-sign Burress. That wasn’t the case.

Burress was recently commenting on former Green Pay Packers wide receiver Davante Adams’ departure for the Las Vegas Raiders on the Up on Game podcast, and the decision that he had to make, and he likened it to his own free agency situation in 2004. What follows is the long story that he gave behind his thought process, and why he turned down the same contract from Pittsburgh that he signed with New York.

I myself was in a situation too where I left the Pittsburgh Steelers back in 2005. They offered me the same contract as the New York Giants. I did not want to leave Pittsburgh. Those were my brothers. We had a really good team. We had lost two AFC championships in five years to the New England Patriots. I love my brothers.

But at some point in your career, you have to be selfish. You have to put yourself before the team, and start to think about what you want your career to be. I kind of put myself in a situation where I was like, ‘You know what? I added myself to a puzzle in Pittsburgh, and I added myself to a puzzle in New York. Which destination for me makes sense?’.

In Pittsburgh, I went to Bill Cowher, and he said, ‘Listen, we’re not gonna change our offense for one person. I was playing with Jerome Bettis. He was getting the ball 30 times a game, and we were throwing the ball 18-20 times a game. And I looked at New York—nobody knew how good Eli Manning was gonna be at that point. He wasn’t even a starter in 2004. I said, ‘Listen, if he’s gonna be anywhere halfway as good as his brother, I think we’re gonna be okay’.

But on the flipside of that, I was the X wide receiver, along with Devante Adams, and you know who I had on the other side of me, was who I thought was the best tight end in football, was Jeremy Shockey. So I said, ‘You know what? Now I get a chance to get a double team off of me. I could be more free. I can play in the slot. I can do different things in the offense, because Jeremy Shockey demanded a double team, and so did I, so, defensively, schematically, if you wanted to play us, you had to pick who you wanted to double team.

The 2004 season was, of course, Ben Roethlisberger’s rookie year, and he wasn’t supposed to start. It was supposed to be Tommy Maddox, who was hurt in Week 2, and they did throw the ball a lot with Maddox. They did have to be conservative with Roethlisberger early in his career, only attempting 563 passes in his first 26 games—21.7 per game.

Manning attempted 557 passes during the 2005 season. Roethlisberger would only hit that mark six times in his career, including his last four full seasons in the NFL, and for the first time only in 2013.

In case you’re wondering why Burress would diss Heath Miller, I will remind you that you’re forgetting Miller was drafted in 2005, after the 2005 free agency period, so Burress couldn’t consider him in his own free agency decision. Shockey was averaging 61 catches per season for 698 yards by the time Burress signed, and that was while missing half of one of his three seasons.

If memory serves me, this was the contract that Plaxico Burress signed with the Giants in 2005 that the Steelers offered to match. #Steelers #NFL pic.twitter.com/uQmBItHmeS

This, by the way, is roughly the contract that Burress signed 17 years ago. That was good money then. During his five-year career with the Steelers, he caught 261 passes for 4,164 yards with 22 touchdowns, including two 1,000-yard seasons, which was impressive in a Steelers offense in that era. During his four seasons with the Giants, he caught 244 passes for 3,681 yards and 33 touchdowns. And he caught the game-winning touchdown in the Super Bowl in 2007. Then he shot himself in the leg and got himself arrested. He actually finished his career back in Pittsburgh in 2012, catching one last touchdown from Big Ben.

How would Steelers history have gone differently had the Steelers re-signed Burress instead of Ward, as they would later in that 2005 season during training camp? The team first tried to extend Mike Wallace back in 2012, if you don’t remember, before extending Brown, instead. Of course, doing so didn’t help them win any Super Bowls…and Pittsburgh won the Super Bowl the year Burress left, with Ward the Super Bowl MVP.