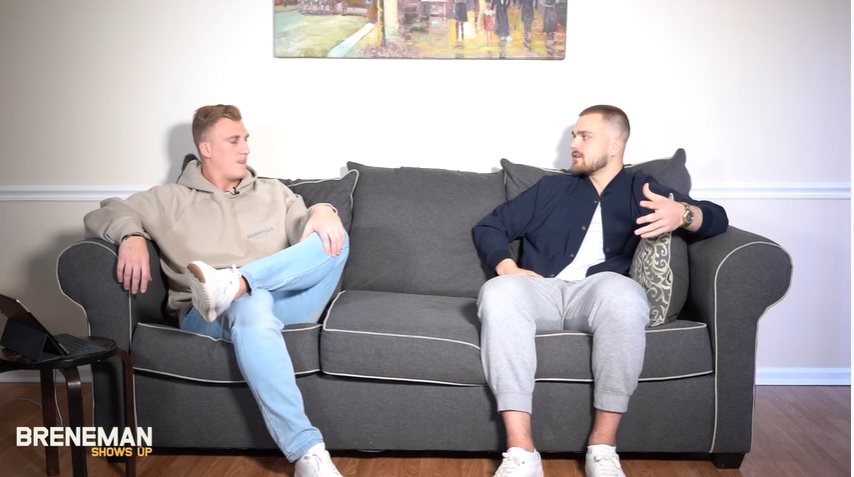 It’s a promise that’s made and broken every year. The scouts, the coaches, the teams who tell prospects, “we’re going to draft you here” and never do. Had teams kept their word, TE Pat Freiermuth wouldn’t be a Pittsburgh Steeler and we wouldn’t be talking about him right now. Freiermuth should be a Jacksonville Jaguar. He’s not. And he’s sure doesn’t mind.

Freiermuth joined Adam Breneman on the Breneman Shows Up podcast earlier this week to recap his college career and first season in the NFL. Freiermiuth told Breneman how stressful draft night was for him.

“I really thought I was gonna go to Jacksonville really with [tight ends coach Tyler Bowen],” he told Breneman. “They called me and they were like, Hey, we’re gonna draft you at [pick #45].”

Watching the draft from home, Freiermuth watched on TV as the 45th pick was announced. The selection? Stanford OT Walker Little.

The Titans instead took another OT, North Dakota State’s Dillon Radunz. Had Freiermuth left his ringer on just another minute, he would’ve heard the call from Pittsburgh. In fact, when he realized his phone was buzzing, he thought it was Jacksonville calling him back.

“My phone started buzzing from Pittsburgh. I really thought it was like Bowers calling me. I had a new phone. And so I answered and it’s Mike Tomlin.”

It took a couple extra minutes of waiting, but Freiermuth became the 55th pick of the 2021 NFL Draft. Well worth the wait, Freiermuth became a starter and fan favorite his rookie season, finding the end zone seven times. He’s now the clear-cut “guy” heading into his sophomore season and playing for a great coach and stable organization, two things he wouldn’t have had if the Jaguars would’ve stuck to their word.

“I’m happy I didn’t go [to Jacksonville]” Freiermuth said, confirming the Jaguars never told him why they didn’t take him.

Those teams may regret their decisions. Walker started just three games as a rookie while Radunz struggled to see the field even with injuries ahead of him, making just one start.

Of course, those promises happen every year. They’re not unique to Freiermuth or a singular draft class. For all the mock drafts and projections and even teams talking to prospects, no one knows what’s going to happen once the draft is live. All that matters is finding a team who fits you well. And Freiermuth couldn’t have landed in a better place than Pittsburgh.