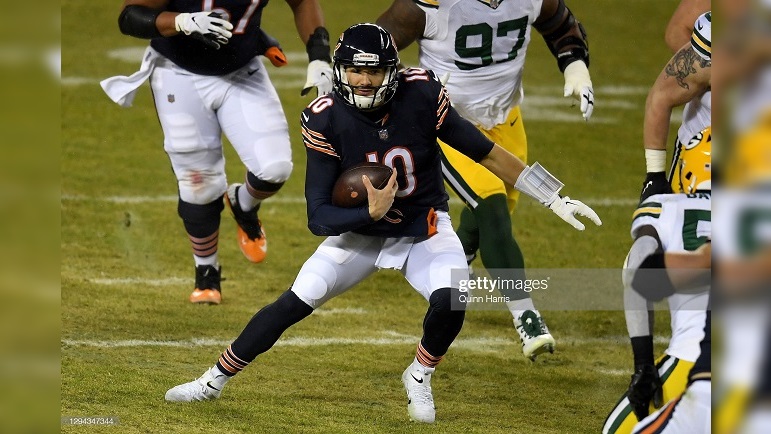 The Pittsburgh Steelers have been busy in free agency, including the signing of quarterback Mitchell Trubisky, and today I wanted to provide some data context to what he has done in his career so far. Let’s get right to it, starting with Expected Points Added (EPA) and Completion Percentage Over Expected (CPOE) from nflfastR: 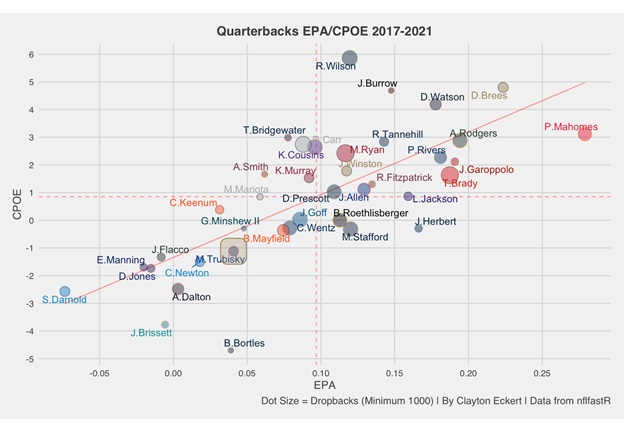 As we can see, Trubisky is below the mean in both datapoints in his career, four years with the Chicago Bears leaving much to be desired overall, and minimal time backing quarterback Josh Allen in Buffalo last season. He ranked 30th in EPA out of the 39 quarterbacks on the graph and 31st in CPOE, highlighting his well below average play compared to his peers. I would be remiss if I did not mention recently retired Ben Roethlisberger and seeing how Trubisky has stacked up to him and many other starters in the time period.

Considering the strong free agency Pittsburgh has had, it will be interesting (if he is indeed the starter in 2022) what kind of trend we see with arguably the best top to bottom roster Trubisky has been a part of.

Speaking of trends, what did this data look like in 2020, the last year he received meaningful snaps? 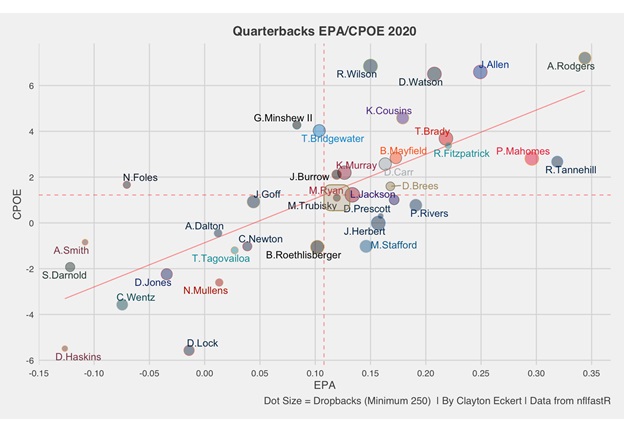 Here we see an improvement compared to his career numbers, mainly his CPOE. Trubisky’s ranks improved to 20th in EPA out of 36 quarterbacks, along with 19th in CPOE. It is important to note he only played in nine games that season, playing the first three weeks, then was benched for Nick Foles (on the left of the graph for comparison) along with missing time with a right shoulder injury, and finally returning to play the last six games of the season.

Seeing the names above and below him give context to his level of improvement, and realistic expectations, whether positive, negative, or stagnant. It is also interesting to see him land above Roethlisberger on the above graph for optimism compared to recent seasons, and seeing quarterback Dwayne Haskins ranking at the bottom in both data points in his last opportunity with Washington.

How did Trubisky fare in completed and intended air yards in 2020? 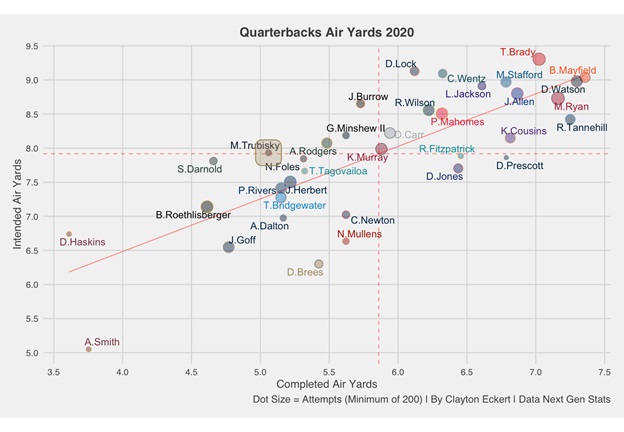 Trubisky was right at the mean for the qualifying quarterbacks in intended air yards, but had the sixth-lowest rank (but above Roethlisberger) in completed air yards at just over five. This highlights a hopeful improvement for Pittsburgh regarding the depth of throws in the offense in recent seasons, but obviously the completed number and his accuracy will be the crucial factors to improve if he is in fact the guy next season. (P.S. HASKINS…)

While we’re on the topic, let’s look at red zone data for Trubisky’s career, which highlights accuracy when defenses have less ground to cover, along with decision making and team value in scoring situations using Points Earned and Season EPA from SIS: 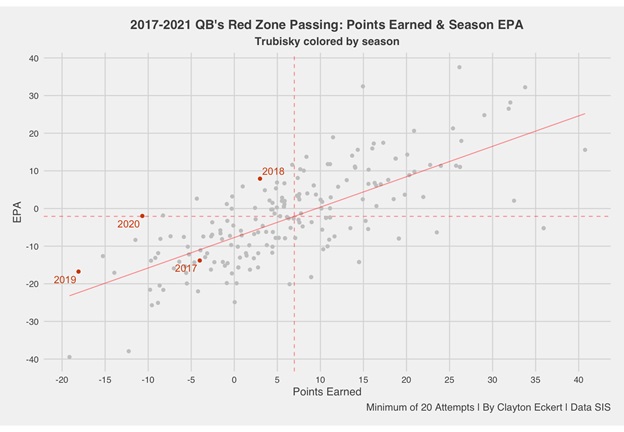 Unfortunately, Trubisky has been below average in the red zone throughout his career, which is definitely a concern moving forward, but hopefully this change of scenery and a 2021 year sitting and learning behind Allen was beneficial.

Trubisky’s only positive numbers in the data points came in 2018 when he played 14 games with 64 red zone attempts, 18 touchdowns, and one interception, paired with a solid 64.1 completion percentage that ranked top 25 in this five-year sample, and a personal best on target percentage of 75%!

Seeing an improvement (while minimal) of 14 touchdowns and two interceptions in 2020 got me wondering what his overall touchdown/interception ratios were in that season: 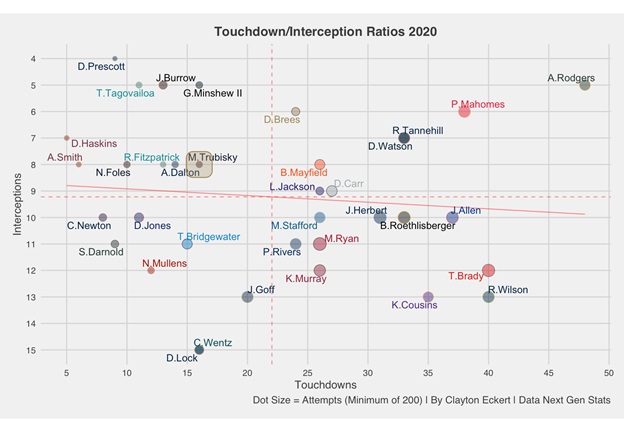 With fewer games than the players on the right, Trubisky threw 16 touchdowns and eight interceptions for a plus-eight differential. Landing on the upper left is obviously important to note, tying for the second-best differential of players on the left side of the graph. So hopefully this points to some lessons learned with experience, along with a hopeful positive trend around his 2018 red zone numbers with his opportunity in 2022.

Another interesting element to monitor will be the Matt Canada equation, and how the passing attack will look with the scheme and style expecting to change from Roethlisberger’s Hall of Fame input and influence, to Trubisky’s mobile skillset. Let’s start with outside the pocket passing: 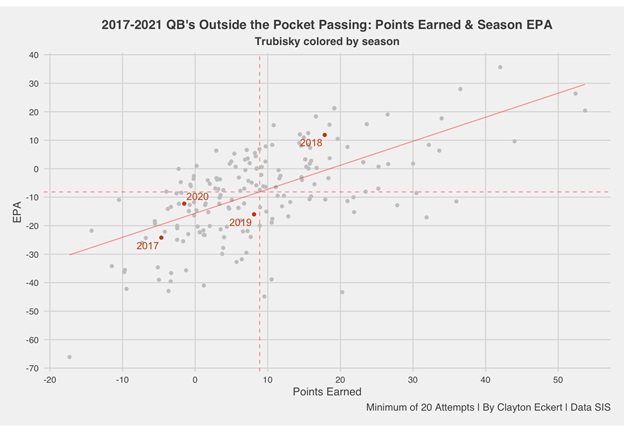 Similar to the red zone date, 2018 was the peak season for Trubisky with above the mean results in both data points. His points earned ranked 32nd in the time period, along with an EPA that ranked 14th! Each of his other seasons were below the mean in both data points, with 2019 being his only other positive number in points earned. So again, this points out the highs and lows of his time with the Bears.

When Trubisky decided to take off and scramble, he fared best in his first two seasons. Looking at data from PFF, he had the most volume on such plays in 2018 with 38 attempts and 330 yards. Each of his other three seasons, he had 20-25 scrambles, and in his rookie year provided the most yardage at 229. For recency context, he had 20 scrambles in 2020 for 176 yards which ranked 12th out of 21 players with 20 attempts or more, which was also good for 8.8 yards a clip. For his career he averaged 8.2 yards per scramble, hinting at making good overall decisions of when to take off.

Another big and expected change I’ll wrap up with is the use of play action, and here is how Trubisky has fared in his career using data from SIS: 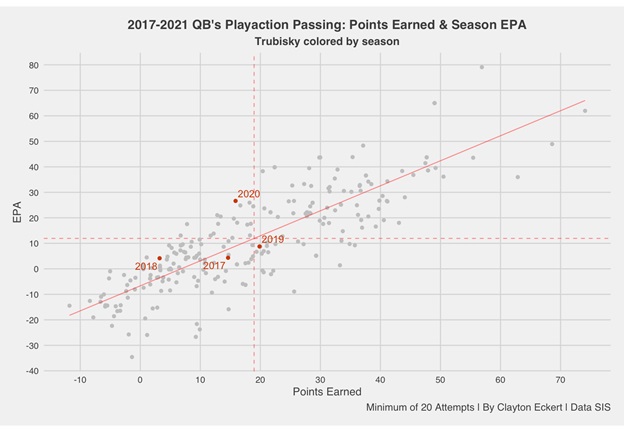 This element of the game helps most passers across the board, as we can see on the graph with the mean in each data point landing at higher values. Trubisky had his best results in 2019 and 2020, and if the data/trend holds true, this could be the most noticeable and successful change we could see to the Steelers’ offense considering the additions and expected improvement on the offensive line, setting up the threat of the running game and opening up easy opportunities to pass or scramble off of that.

Overall, the data confirms much of what we have heard, the tenure with the Bears left much to be desired along with some flashes of potential, but hopefully my goal of adding context was enjoyable to many of us that did not watch him weekly during that time. Here’s to hoping the Steelers get the most out of a more seasoned player, and hopefully maximizing his strengths in a seemingly better situation.

In an unusually aggressive and active free agency with ample cap space, it will be interesting to see how the pieces come together for Pittsburgh in 2022, and what Trubisky’s time looks like in this next chapter of the post-Ben Roethlisberger era.

What are your thoughts on the Trubisky signing? Do you think the team will draft a quarterback as well? Thanks for reading, and let me know your thoughts in the comments!