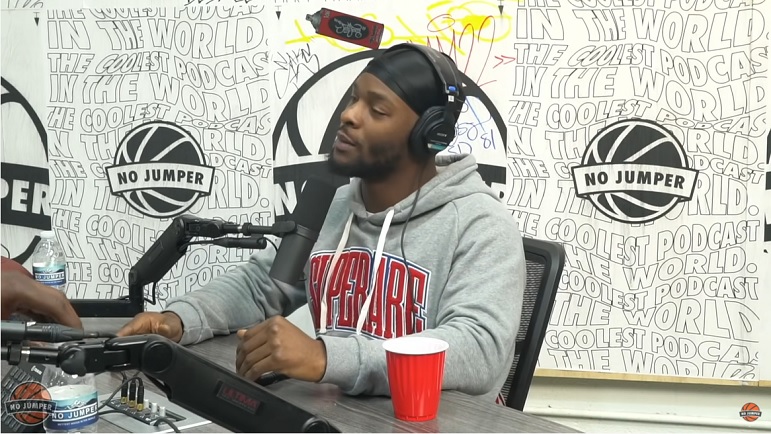 The Pittsburgh Steelers have a storied history at the running back position. Long known for their brand of power football and physicality, the position offers up perhaps the greatest single play in not only team history but league history, in the form of Franco Harris’ “Immaculate Reception.” From Harris to Jerome Bettis, to the longest run in Super Bowl history courtesy of Willie Parker, the position seems to go hand-in-hand with the franchise the way peanut butter goes with jelly.

A few seasons ago, the team had a dual talent at that spot in Le’Veon Bell that some argue, if he would’ve maintained his pace in Pittsburgh instead of chasing money, was bound for the halls of Canton.  Known league-wide for his patience in letting his blocks develop, his runs were often a thing of beauty, resembling gliding instead of running. He credited his early years playing, where his position was along the offensive line.

Recently he caught up with the podcast No Jumper Sports, and he credits that early development along the line in him getting to the Pro Bowl level he once had, citing the simplicity of just firing off the snap and hitting the person across from you, instead of worrying about ball protection. An Ohio native in his early years, he grew up in a family of Steelers’ fans and was absolutely elated when he heard Mike Tomlin on the other end of the line.

“All I hear is Le’Veon, what’s up man?” he told the show’s hosts. “Its Coach Mike Tomlin, how you doing? I Instantly, I ain’t have any shoes on I’m outside, I’m running up the street. That’s how I went, ended up seeing my name and shit. Like my whole family grew up Pittsburgh fans my whole life. My mom she was like ‘I told you you’re gonna get drafted by Pittsburgh, I told you.'”

Once there, his rookie year was a solid one, but Bell’s body transformation that offseason helped catapult him into the league’s elite at the position, shifting from more of a plodder-type to a slashing, dual threat. He made the Pro Bowl in 2014, 2016 and 2017, and he credits a lot of that to the down-to-earth temperament of Tomlin. He even had to stop mid-sentence to re-evaluate his statement.

“Coach Tomlin is like one of the most real coaches that I’ve, actually he probably is the realest coach I’ve ever been around for real. People like him so much because he’s not afraid for you not to like him. He knows how to speak well, he can relate to me in a sense like no other. “

Once possessing one of the league’s top offenses in the form of the “Killer Bees” with Ben Roethlisberger, Bell, Antonio Brown and Martavis Bryant, the group dissipated in a matter of seasons due to suspensions, and chasing contracts. One of Bell’s ex-teammates, Brown, notoriously ripped off his jersey and shoulder pads in the middle of a game this past season while playing for the Tampa Bay Buccaneers, and Bell defended his close friend. He even feels he could’ve prevented the blowout that occurred.

“AB’s cool as hell, I talk to him about whatever we wanna talk about. Even when everything happened on the sideline with Tampa, I low key wish I wasn’t in the game cause I felt like I could’ve been one of the guys who [could say], ‘alright bro, AB, calm down.’ He’s a guy who’s kind of misunderstood. He has some moments but like overall, he’s a great person. “

Always known for incorporating boxing into his training regimen, Bell said he’s been boxing heavily because he feels like that’s going to be his next transition after his football career is over, even mentioning the name Jake Paul as an opponent he’d love to see. However, this interview was purely football-based and the one ringing endorsement I got from it was Bell’s strict allegiance to Coach Tomlin, even after the messy divorce between player and team.

“He’s a great coach, nothing bad I gotta say about Coach T. He’s more of a guy that he’s on you, but it’s not like to the point where it feels uncomfortable to come up and approach him. He has that perfect kind of medium. ‘Alright I’m on you but like I’m approachable too.’ Like his rule he kinda always goes by is ‘don’t be the guy’. He always said if we seen him around making rules, we ain’t getting to the shit that we need to be getting to, so don’t be the guy. Instances going out before the game, those kind of instances.”

Being viewed as a players’ coach in the league nowadays is a great thing. Perhaps it’s why we saw the Aaron Rodgers-Mike Tomlin flirtation in this past season’s Packers-Steelers game. Regardless, Bell’s adulation of Tomlin rings loudly, and perhaps this offseason, with ample cap space, some players may get their wish of playing for such a coach.