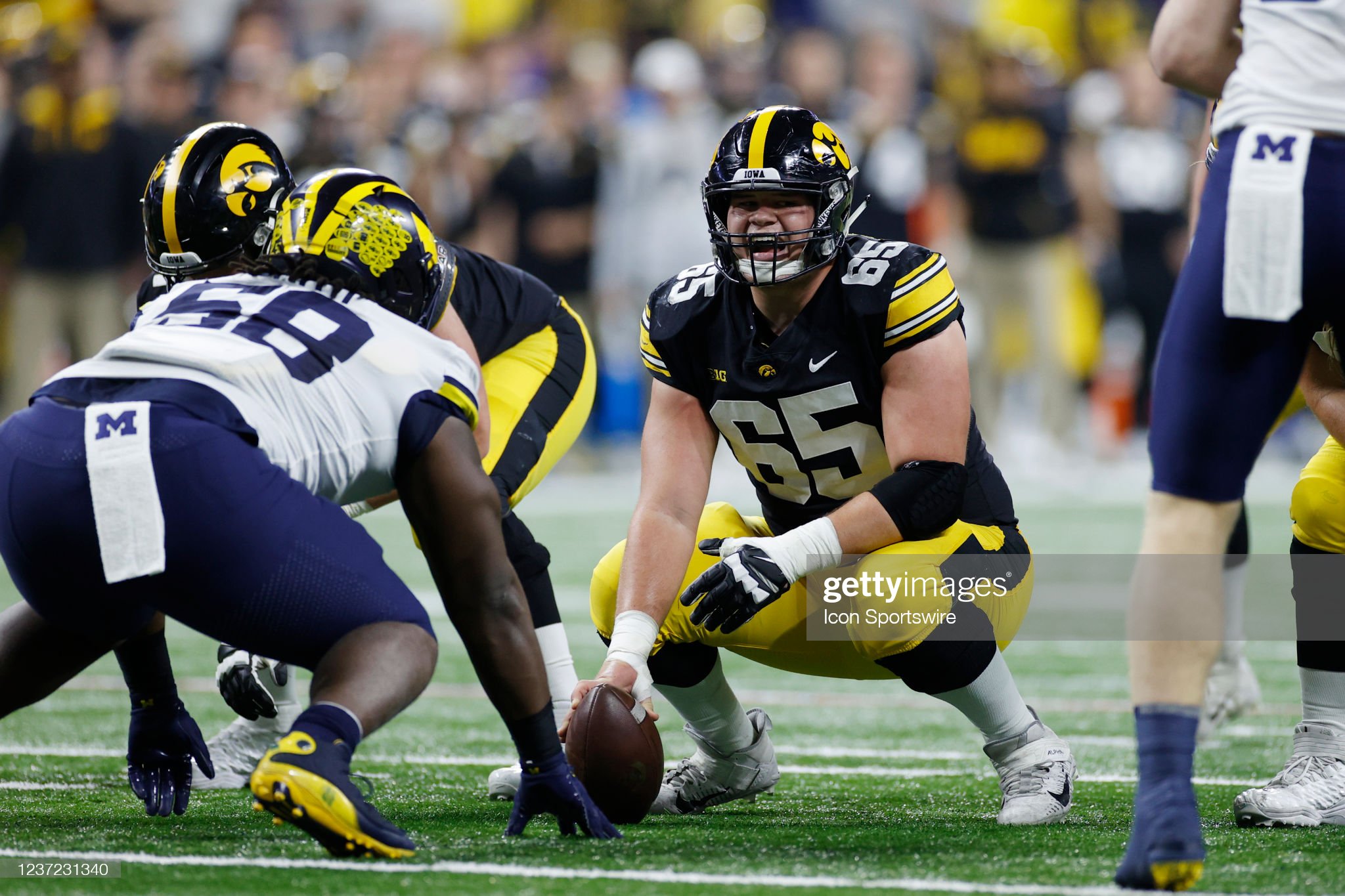 If it wasn’t already mock draft season, it certainly is now after the conclusion of the week-long NFL Scouting Combine in Indianapolis, and the start of the NFL’s new league year — and free agency — right around the corner.

Tuesday seemed to be the day to roll everything out mock-draft style from the national outlets, as The Athletic’s Dane Brugler dropped his third mock draft Tuesday morning, and Pro Football Focus’s Brad Spielberger came in swiftly with his mock draft as well.

Unlike Brugler, Spielberger came in guns blazing, dropping Liberty QB Malik Willis at No. 2 overall to the Detroit Lions before then later landing a name that many are familiar with at No. 20 overall to the Pittsburgh Steelers, though he’s rarely been mocked there in recent weeks.

At No. 20 overall, Spielberger has the Steelers landing Iowa All-American center Tyler Linderbaum, who happens to be the No. 12 overall prospect on PFF’s board.

Tyler Linderbaum has only allowed 19 pressures since 2019…

“The elite center prospect out of Iowa that was consistently landing in the top-10 takes a bit of a slide here because of positional value at center,” Spielberger writes. “Over the last three seasons, Linderbaum has been PFF’s No. 1, No. 1, and No. 5 highest-graded center in the country. It’s entirely possible a team ignores positional value and takes a very good football player in Linderbaum earlier, but top center prospects tend to get snatched up around pick No. 20 over the past few years.”

Linderbaum was certainly an elite-level player at the collegiate level, but he comes into the NFL undersized and lacking overall scheme versatility.

Tyler Linderbaum measures in with 31 1/8" arms.

Austin Blythe is the only interior OL with under 31.5-inch arms and 800+ snaps played in a season over the last five years.

At the 2022 NFL Scouting Combine, Linderbaum came in smaller than current Steelers’ center Kendrick Green, measuring in at 6021, 296 pounds with 31 1/8-inch arms. He is certainly a talented center, one that is likely plug and play in the NFL, but he’s scheme dependent, serving best in an outside zone-style attack, as he’s compared favorably to Philadelphia Eagles’ All-Pro center Jason Kelce.

Unfortunately, that type of scheme isn’t exactly in Pittsburgh, which would make Linderbaum a difficult fit overall, unless the Steelers continue to change more towards an outside zone style blocking scheme.

Here’s what Tom Mead had to say about Linderbaum in our scouting profile of the Iowa standout from back in January.

“There is no doubt that Linderbaum is a skilled Zone run blocker and a strong pass blocker at the college level. I don’t think many will question this skill set. College measurements are usually inflated so he may be even smaller than he is listed. His arm length will need to be at a minimum of 32 inches. Only two starting centers in the NFL come in under that length. If it is less than 32 inches he may not be drafted as high as his early projections. Only three of the NFL starting centers were drafted in the first round and none were in the top half of the round (18TH pick or later). I may be in the minority but based on his size, I’m not totally convinced he is a first round pick but it only takes one team to fall in love with him

“The Steelers will be in the market for a center this spring. Linderbaum would be a fit schematically in what Matt Canada’s offense ran last year. It has been reported that the Steelers had scouts at Iowa games at least four times this year so he is definitely on their radar. The question is will they want an undersized player to be the lynchpin in the middle of the offensive line. My projection and grade will be based on good measurements but if they don’t meet the minimum requirements, the projection will likely drop.”

It’s very hard to project an undersized center with historically short arms to the Steelers in the first round, especially after what transpired at center in 2021 with Kendrick Green. Linderbaum is certainly more advanced at the position than Green, but those measurables have to breed some caution overall, especially in the first round.