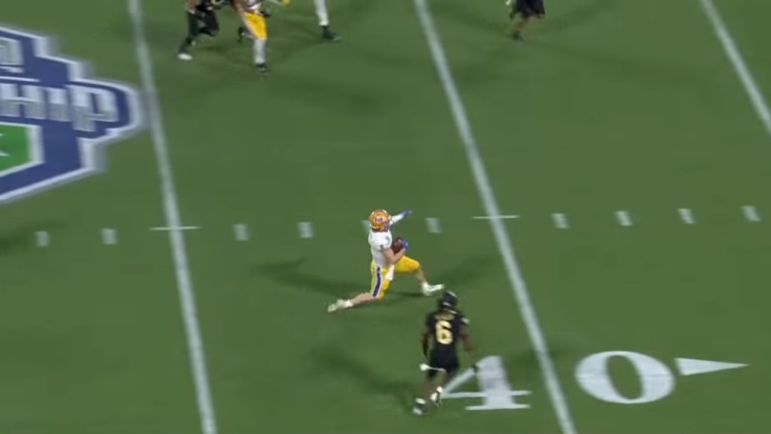 Kenny Pickett broke records set by Dan Marino at Pitt. Yet two things have dominated his story arc over the past year as much or more than his play. More recently, it’s been about his hand size, and his stretches to try to increase his hand measurements.

Not so long ago, it was about ‘the slide’, a moment in the team’s ACC championship game last season in which he appeared to be going into a slide on a scramble, but rather than go to the ground, he pulled upright and kept running after the defenders committed to the slide.

It’s something he recently talked about in a long and wide-ranging interview with Adam Breneman, on his show, Breneman Shows Up. First and foremost, he insists that he was not pre-planned or intentional—though it did look cool.

“Usually I slide so late, like, guys were on top of you and they dive over the top and you get late hits. They’re usually so aggressive”, he said. “And I just felt everyone kind of pull up as I was chopping my feet, and I’m like, ‘I should just keep going’. I thought it was a stutter step, but when I watched the tape, obviously, I dragged my back leg. It looked a lot cooler than I thought it was”.

The play came in the second minute of the game, with the Panthers facing a 3rd and 5 from their own 42. After scrambling out of pressure up the middle, he took off upfield, originally initiating a sliding motion at about the opponent 43. He turned the corner and raced up the sideline for a touchdown. Yet in hindsight, even he knows it was unfair.

“Don’t get me wrong, there should be a rule. I shouldn’t be able to do that, because you’re trying to protect the quarterback”, he told Breneman. “But it wasn’t a rule. It wasn’t a rule because nobody’s ever done it before. It’s not happening on a week-to-week basis. It’s just something that doesn’t even need to be talked about”.

That play put them up 7-0 early, but Wake Forest would take a 21-14 lead by the end of the first quarter. After that, however, it was all Pitt, with Pickett leading three touchdown drives, the special teams adding a field goal, and capping it off with a defensive pick six for an exclamatory 45-21 win.

Pickett said that so many teams asked him about that play during the pre-draft process, asking him if it was planned and things of that nature, which he of course insisted it was not—and surely it wasn’t. After all, it came on a scramble that was forced by pressure up the middle. It was an in-the-moment decision—one he would be penalized for making again.