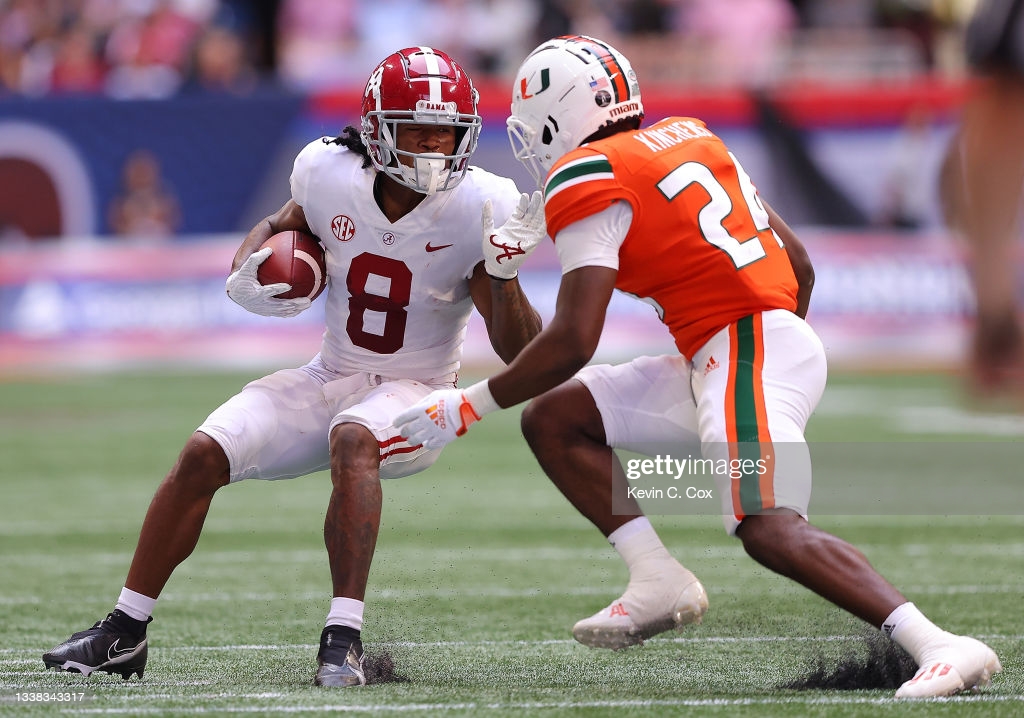 One player on my list of guys that I wanted to interview during my time here in Indianapolis for the 2022 NFL Scouting Combine was Alabama WR John Metchie III. Metchie had a good season for the Crimson Tide this season prior to going down with a torn ACL in the SEC Championship Game against Georgia. As expected, Metchie was asked about his rehab, which he said everything was going well and that he was on-pace to be ready for training camp.

When I got the chance to ask Metchie a couple of questions, I wanted to address one part of his game that stood out over the rest of the wide receivers in this draft class: his blocking.

JH: John, you were a prolific receiver at Alabama, but evaluating your tape, you’re probably one of the best, if not the best blocking wide receiver in this class. Talk a little bit about the pride and your willingness as a blocker to block for your teammates and what that shows for you as a teammate going into the next level.

JM: Oh yeah, I like that one. I think I‘m the best blocker too in this class. But no, I think it’s the pride we have all that Alabama. Not just me when I was there, but if you watch all the guys, even Smitty (DeVonta Smith) was going out there and get some nice blocks. It’s something we take pride in and something we talk about in the room a lot. It’s all about pride and just not only playing with the ball, but also playing just as well without the ball and having a big impact without the ball as well.

Metchie referenced the word “pride” a lot when it came to his mindset as a blocker at the receiver position, and it shows throughout his tape. He intentionally seeks out defenders in the open field and looks to take them on, attacking their chest with a strong punch and driving his legs on contact to spring his teammates for big plays. That brought me to another question about a player Metchie’s play style reminds me of when watching him play.

JH: John, at any time have you ever watched JuJu Smith-Schuster, either during his days at USC or for the Pittsburgh Steelers, and taken anything from his game? And in the same breath, have you ever talked to Coach Tomlin or Kevin Colbert from the Steelers organization?

JM: No, I haven’t talked to either of them yet. And I haven’t watched much of JuJu. I’ve seen him on the Steelers a little bit. I like how he plays. He’s a more physical receiver I like that aspect of his game, for sure.

While Metchie may not have met with the Steelers as of yet, I do appreciate him recognizing Smith-Schuster’s physicality as a player in the league, both as a pass catcher and as a blocker. While not a one-for-one comparison, I do think there are a lot of similarities between JuJu and Metchie as reliable receivers that make the contested grabs over the middle, can pick up yards after the catch, and are both accomplished blockers for the position. Should the Steelers lose JuJu in free agency in a couple weeks, Metchie would be a logical name to fill the void that JuJu would leave in Pittsburgh.

What are your thoughts on John Metchie III as a prospect? Do you think his blocking ability is something that is being undervalued in the draft process? Do you see him as a logical replacement for JuJu Smith-Schuster should he leave in free agency? Please leave your thoughts in the comments section below and thanks again for reading!