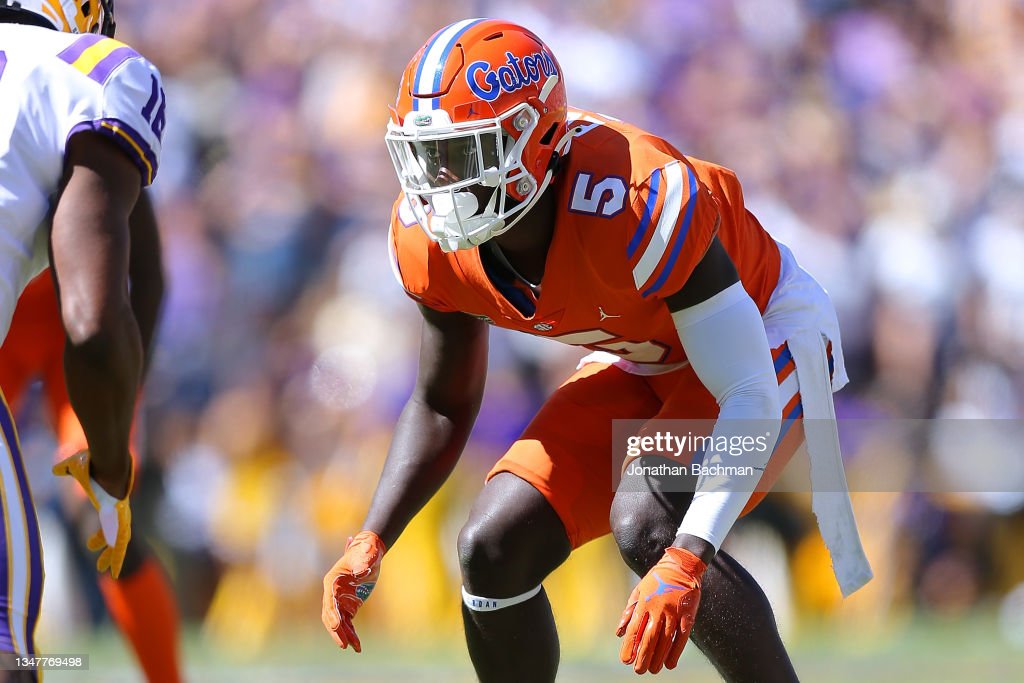 Throughout the early duration of my evaluation of this year’s cornerback crop in the 2022 draft, it has become apparent that this class has plenty of lengthy cornerbacks who are able to excel in man coverage. This proves particularly important in the Pittsburgh Steelers defensive scheme, which since the acquisition of Minkah Fitzpatrick early in the 2019 season, has relied heavily on a single high centric and man coverage heavy scheme.

Enter Kaiir Elam, a Florida product with NFL bloodlines standing at 6’2” 196 pounds, bursting onto the scene as a Jim Thorpe Award Finalist in 2020, before entering the draft after his junior season in the fall of 2021. Interestingly enough, unlike many players with lengthier frames, Elam has shown plenty of versatility to excel both in the slot and on the boundary. Likewise, today we’ll be taking a deeper dive into Elam’s man coverage ability, and evaluating whether he is a potential target for Pittsburgh in this year’s upcoming draft.

When aligned on the boundary, Elam is able to utilize his unique combination of arm length, lateral quickness, and patience to frustrate receivers at the line of scrimmage. Similarly, when arriving at the catch point, Elam’s frame, arm length, and ball skills allow him to bludgeon opposing receivers pocket’s with violent and well placed punches, often resulting in pass breakups.

On the rep below, from a home contest against Missouri during the 2020 season, Elam does a great job of matching the receivers inside release, and engaging with a two handed jam, flattening the route and disrupting timing. Even more impressive, Elam is able to navigate over oncoming traffic and close downhill to arrive at the catch point, where a violent left handed punch jars the ball loose, forcing an incompletion.

When aligned in press coverage on the boundary, Elam has proven nearly impossible to target downfield, where his length, hip mobility, and long speed allow him to disrupt receivers releases and squeeze them into the sideline with ease. On the rep below, from a 2020 home contest against Georgia, Elam uses an inch technique to force the Bulldog’s receiver to take a wide release before engaging with an off handed jam, ultimately forcing the receiver into the sideline within the first five yards of the rep. Once the receiver passes comeback territory, Elam turns to locate the football, continuing to squeeze the receiver to the sideline, and allowing no room for the Bulldogs quarterback to throw in bounds, forcing the pass to sail harmlessly out of play.

Rarely do you see a corner with Elam’s combination of frame and foot quickness in and out of his breaks, often referred to as “click and close” ability. Below, aligned in press coverage on Alabama’s Jameson Williams this past season, Elam once again forces the receiver wide with a patient mirror press before engaging an off hand jam, throttling down effortlessly to stay in phase, and getting his right arm across to break up the hitch.

While Elam’s slot versatility is certainly impressive, and will likely move him up some teams draft boards, his lockdown ability in press coverage on the boundary is his calling card, and will likely have him hear his name selected in the first 50 picks of this year’s draft. If Pittsburgh is unable to retain 2021 breakout star Ahekllo Witherspoon, Elam could help fill the void, replacing the length and press coverage ability that the team would stand to lose on the boundary.

Unlike most cornerbacks at the collegiate level, Florida used Kaiir Elam in a variety of ways, often shifting him from the boundary into the slot in sub packages throughout a game. In the slot, his length allows him to excel in both press and catch man coverage, while his speed allows him to track receivers from sideline to sideline.

Below, late in a blowout win over Missouri, Elam draws a man coverage assignment on the tight end on a designed sprintout concept. Deploying catch technique, Elam stays square to the line of scrimmage, allowing the tight end to approach before engaging a two hand jam to flatten the route, staying connected to the near hip, and playing through the pocket to force the incompletion. While Elam’s boundary work is still superior to his slot work, his experience guarding tight ends could certainly make him a unique swiss army knife for a defensive coordinator in sub packages.

While this next pass breakup, from a 2021 matchup against Florida State, was ultimately nullified by an offsides penalty, I came away extremely impressed with raw movement skills on the rep. Aligned in press coverage over the point man of a trips formation in the boundary, Elam matches an outside release, disrupting timing with a physical two handed jam.

As the receiver works to get downfield, Elam closes to the near hip and stays connected to the top shoulder at the top of the route before throttling down in unison with the receiver and closing to play the pocket and secure the pass breakup. In terms of pure movement skills, there are few players of Elam’s stature who possess his hip and ankle mobility, traits which will help him contest the catch point consistently as he moves to the next level.

When guarding slot receivers, it is much tougher to play heavily to one leverage, making it necessary for slot defenders to have the speed to track an opposing receiver anywhere in the field of play. Likewise, Elam’s combination of hip fluidity and long strides allows him to recover from a trailing position quickly and efficiently.

On this rep, also from this past season’s matchup against Alabama, Elam allows vertical separation up the seam before closing to the near hip and arriving at the catch point to secure an impactful downfield pass breakup. Note Elam’s discipline in playing the pocket from out of phase without turning back to locate the football, which would have taken him further out of phase.

Overall, I came away with my evaluation of Kaiir Elam’s work in man coverage extremely impressed, as his versatility and ability to suffocate receivers with his length and footwork in press coverage jumped off the tape. With other lengthy cornerback prospects, namely the draft’s elite talent at the position, LSU’s Derek Stingley and Cincinnati’s Sauce Gardner, gone by pick 20, Elam figures to be at the top of the teams board if they choose to address cornerback early in the draft.

When evaluating cornerbacks who the team may target, remember that in a modern Mike Tomlin defense, few traits are more important than a prospect’s ability to excel in man coverage. That being said, despite some struggles in the tackling department, Kaiir Elam figures to be a top prospect on Tomlin and Colbert’s cornerback draft board.