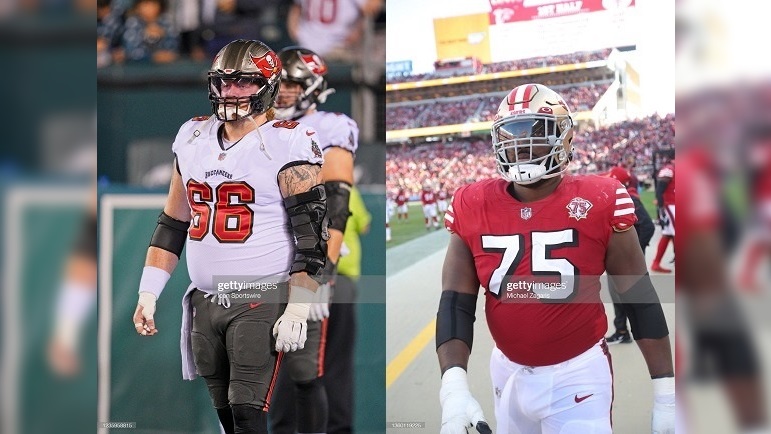 The start of the 2022 free agency signing period is now a little more than a week away and once March 16 does arrive, the Pittsburgh Steelers are expected to be a little more active than normal in the early stages of it. One area the Steelers might address via free agency in the coming weeks is their offensive line. According to Dan Graziano and Jeremy Fowler of ESPN.com on Sunday, there are two soon-to-be free agent veteran interior offensive linemen that the Steelers might just be in play for in the coming weeks. One is guard Laken Tomlinson, and the other is center Ryan Jensen.

Below is what was posted Sunday morning on ESPN.com on Tomlinson, who has spent his last five seasons with the San Francisco 49ers.

“He’s emerging as a top guard available and could spark a bidding war closer to free agency,” Graziano wrote. “The Bengals, Panthers, Vikings, Steelers, Jets and Seahawks are among teams that will be in the guard market.”

For whatever it’s worth, the Steelers did seem to have some pre-draft interest in Tomlinson several years ago as they sent their offensive line coach to the Duke pro day that year. Tomlinson was ultimately selected 28th overall by the Detroit Lions in the 2015 NFL Draft. After two seasons with the Lions, Tomlinson was traded to the 49ers in August of 2017 for a 2019 fifth-round draft pick. In 2018, Tomlinson signed a three-year, $18 million extension with the 49ers with $10 million guaranteed.

Overall, it seems like just speculation from ESPN when it comes to the Tomlinson and the Steelers and the same really goes for Jensen.

“One player I expect to generate a lot of interest on the free-agent market is center Ryan Jensen, who has the attention of the Jets, Bengals, Steelers and Baltimore Ravens, among others,” Graziano wrote Sunday morning. “So many teams are looking for offensive line help, and Jensen is viewed as a nasty tone-setter who could help a line with his attitude and ability. If multiple teams are as interested as it sounds they could be, Jensen could be a hot commodity and rake in a nice payday.”

Fowler, however, thinks Jensen might be back with the Tampa Bay Buccaneers this offseason.

“I’m told the Bucs will try hard to get something done with Jensen,” Fowler wrote on Sunday. “They feel he’s among the best centers in the league, maybe the best, when in their system. If that costs $15 million per year — which it very well might — then that might be worth it. The same goes for Jason Kelce with Philly, as far as the system fit. He could do another one-year deal this offseason.”

Jensen is not hard to link to the Steelers this offseason and even with him being on the wrong side of 30 years of age. Age and all, Jensen is due to command big money this offseason after having a new money average of $10.5 million in the deal he just finished off. Personally, I think he re-signs with the Buccaneers this offseason.

The Steelers do have a few of their own offensive linemen set to become unrestricted free agents in the coming weeks in guard Trai Turner, tackle Chukwuma Okorafor and guard/center B.J. Finney. They won’t likely re-sign Finney, but they could decide to re-sign one or both of the other two and especially if the price is low enough. At the very least, the team is expected to select at least one offensive linemen in this year’s draft and possibly even in the first few rounds at that.

Of the two names mentioned in the Sunday ESPN.com post, I think Tomlinson is the likeliest to land with the Steelers this offseason. Even so, I certainly won’t be shocked if neither wind up being signed as a result of the Steelers setting their sights just a little bit lower.