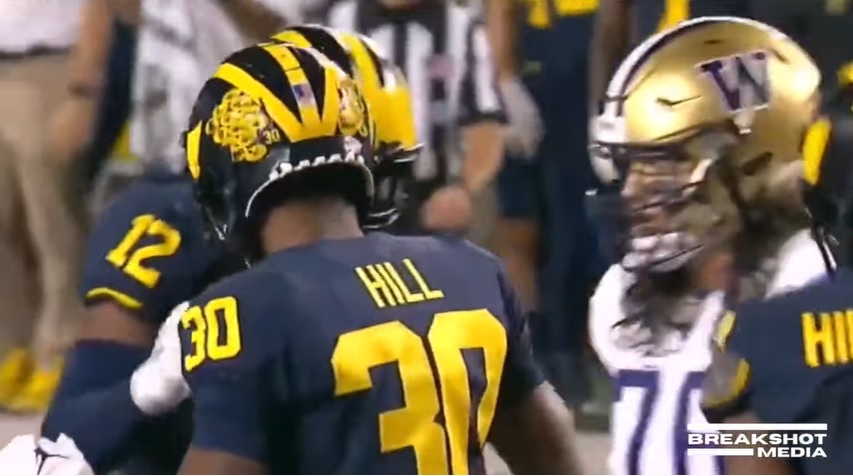 I had done the pre-draft profile on Michigan DB Dax Hill prior to the 2022 NFL Combine and came away a big fan of him and his versatile skill set. Having a family member in the Michigan Football Program that serves as one of the athletic trainers, I was able to get a good amount of information on Dax from behind-the-scenes to build up my knowledge base on the prospect. When the safeties took the podium, he was the first guy I knew I wanted to interview.

JH: Hey, have you talked to Phil Johnson recently from Michigan?

DH: Phil Johnson? You met him?

JH: Ya dude, he’s my cousin down there, so he told me to ask you about how you’re doing and just see if you are gonna run as fast as what he’s saying you’re gonna run.

JH: Where have you been training at?

DH: Out in West Lake, California.

JH: Has that been going good out there?

DH: Yes sir, they definitely know what they are talking about so it’s been good.

JH: Who was the most difficult guy that you faced up against this season, whether it be at safety, in the slot, or out wide at CB?

DH: Probably Jaxon Smith-Njigba. It was a little bit more of a man coverage game plan against them and he was a guy that gave me a hard time especially in the slot.

JH: Go back a little bit to the Wisconsin game and just kind of how at the beginning of the game, I think it was #13 (Chimere Dike). You had a little bit of struggle with him up the seam and then in the corner the end zone, but then you’re able to rebound get an interception that game get a big-time sack. Just talk about how you were able to ride those highs and lows of being able to stay steady for your team and help come out with a big win.
DH: Oh ya, for sure. Going into half time…really just talking to myself and making sure that I stayed calm and poised. I didn’t really overthink the situation knowing that I had another half to prove myself and so after that, you know, I did well from there. So, that was a, you know, good comeback from that first half.

DH: So, really they have just asked me questions on my comfortability with each position, so really not a specific position any team has kind of pointed me at playing right now. So that’s going to be determined once I get drafted, but really just to know my preference and how comfortable I am at each one.

JH: How the meetings gone for you? Have you been walking out some of those meetings with teams, obviously you’re gonna say that every meeting with every team is gone good, but like this specific coaching staff or schemes that you’ve seen them run when walking out of that meeting and you’re like, “Man, I see myself being a really good fit there.”

DH: You know, for sure. You know, a lot of these teams kind of run the same type of defense that I was just exposed to this year. So, it was all kind of just a refresher of the things I did kind of do a lot of, similar things in terms of you know? The nickel spot, whatever I played, so I really left all of these meetings, you know, being confident and glad that I had the opportunity to play them.

JH: Have you spoken with the Pittsburgh Steelers at all in in formal or informal meeting?

DH: Yes, I had a formal with them. I think that was one of my last ones. I guess you can say that they it went really, really well.

JH: You’re really such a versatile defender, but that makes it where you have to learn so many different positions. Do you like study anyone in the college or the professional game that’s a versatile defender too that can move inside and outside in terms of modeling your game after?

DH: Really… Devin McCourty. I know he was great player coming out so really kind of relates to my game. So that’s, you know, a player I look up to or really just watch just to see how I can improve my game for the college to the NFL level.

After that, a bunch of other media members started asking other questions, so I left to talk to other drafts prospects. Overall, I was pleased with the way Dax conducted himself at the podium, showing a good understanding of his game and remaining level-headed, regardless of the question. He was completely transparent about his struggles covering Jaxon Smith-Njigba one-on-one, which would be a challenge for any college defensive back, let alone a guy that traditionally has played as a safety.

He also did a great job breaking down what went through his mind in the Wisconsin game where he had two bad back-to-back plays right before the half, but was able to rebound after a rough patch and make some clutch plays to help his team seal the win. For him to admit his mistakes, own up to it, and respond the way he did in a professional manner speaks to his maturity and his willingness to have a short memory, which you need to have as an NFL defensive back.

Dax Hill is a very versatile defender, playing a Swiss Army Knife-type of role for the team where he aligned all over in the defensive backfield. I liked his pro comparison to Devin McCourty, as I heavily considered him as my pro comp for Hill when doing his pre-draft profile. Both have a similar skill set and similar athleticism, but McCourty has better instincts at this moment in time and is more consistent in coverage, leading me to more of a Logan Ryan comp to Dax, even though he is probably a better athlete. After talking to more people down here and rewatching the tape, Darnell Savage coming out of Maryland is a pretty accurate comparison for a play style standpoint as well as an athletic standpoint.

Dax has set himself up well as a defensive back that can play anywhere, but likely finds a home as a free safety/nickel defender at the next level. Combine that with how he should test on Sunday and how he’s likely crushing the interviews, and he could easily be a name that goes a lot higher than people expect. Pittsburgh likely wouldn’t be in-play at #20 overall, but given their interest in a formal meeting and the need to add talent to both the safety and nickel spots with a guy that can be fluid and play virtually anywhere, it makes sense to interview Dax just-in-case he somehow makes it to #52.

What are your thoughts on DB Dax Hill and his interview? Do you think he would be a great fit in Pittsburgh? Please leave your thoughts in the comments section below and thanks again for reading!