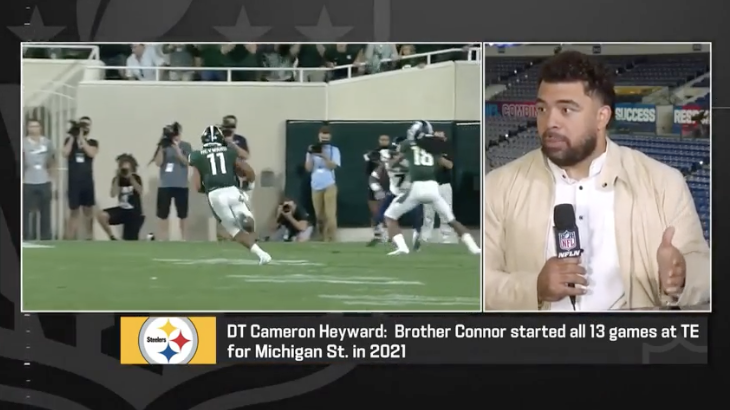 Of course, Heyward has already gone through the combine himself back in 2011 and knows all about the stressful week-long job interview in Indianapolis. Seeing his brother, Connor Heyward — a fullback/tight end hybrid coming out of Michigan State — going through the process and getting set to enter the “family business” much like he did following in the footsteps of his father and brother before him has Cameron beaming with pride.

CONNOR HEYWARD GOT UP FOR THE TD 💪 pic.twitter.com/abveNMH66R

Appearing on NFL Network Thursday during the first on-field workouts of the Combine, Heyward touched on how proud he is of Connor, and what advice he gave to his little brother as he goes through the same process Cameron once did as a future first-round pick out of Ohio State. Being at the Combine to watch Connor means the world to Cameron, who missed his younger brother’s perforce at the Senior Bowl in Mobile while competing in the 2022 NFL Pro Bowl in Las Vegas.

“I wish I could have been there, you know, see him ball out,” Heyward said, according to video via NFL Network. “But, I’m just proud of him. You know, Connor is putting in a lot of work. It’s really interesting to see him just grow up and see him go through all the things me and my dad have been through. You know, he is entering the family business as we call it, but it’s a lot of fun. I know he is excited for today. I’m excited to see him do some stuff today.”

Though he’s gone through the process himself and knows all about the poking, prodding, and what the vast number of questions in an interview with a team can be like, Cameron said his advice for Connor was simple, yet easier said than done: stay patient and remember it’s just part of the process.

“I think the main thing for him, he’s very nervous, but the thing he’s gotta realize, it’s just a piece to the puzzle,” Heyward added. “It’s not everything…your tape’s gonna speak for itself. …You gotta wind up on the right team. You know, it only takes one team to fall in love with you.”

Which team that will be remains to be seen for Connor, who is entering the NFL with plenty of collegiate experience and positional versatility. Though it’s unknown what exactly his fit and role will be in the NFL, Cameron made the case for his younger brother, calling him a “football player,” which helps him stand out above the crowd.

There is definitely an unconventional role awaiting Connor Heyward at the next level. Runs routes like a TE, built and blocks like a fullback. pic.twitter.com/ENsCXql3Y8

“…You know, looking at Connor, I love his flexibility,” Heyward said. “He can play running back, plays fullback, tight end. You know, he was a punt returner, a kick returner. He’s a football player at first and I think that’s what really makes him stand out. In high school he played quarterback…he really understands the offensive scheme at all different levels.”

That alone — being a football player — should lead to Connor Heyward getting a real opportunity to latch onto an NFL roster in the near future, carving out a nice (hopefully long) NFL career.