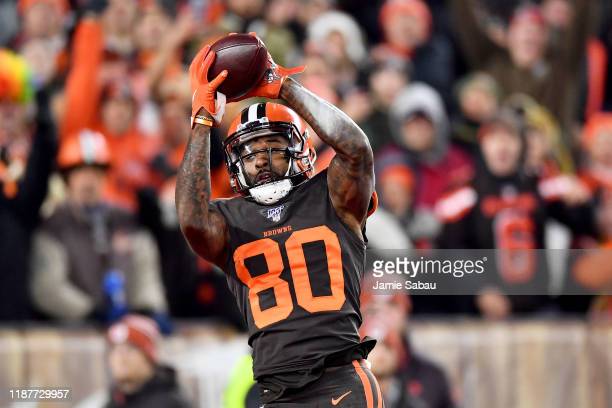 In comes one player, out goes another. That’s the way it works so often in the NFL, every year, on almost every team. It’s less common when it involves such big-ticket names, however. With the Cleveland Browns yesterday agreeing to trade for wide receiver Amari Coopers and take on his $20 million cap hit, they have some very serious matters to consider.

One way that they can get under the cap, and which they are reportedly now considering, is by releasing another wide receiver, Jarvis Landry, whom they originally acquired via trade in 2018. He made the Pro Bowl in his first two seasons in Cleveland, but has not put up such numbers in the past two, with the 2021 season seeing him play through injury.

According to numerous reports, the Browns have granted Landry permission to seek a trade, via Michael David Smith of Pro Football Talk, but that would almost surely have to take place in short order, at least if they want to get the Cooper trade done at the start of the new league year. Otherwise, barring additional cap-cutting measures, it would have to wait until they can clear the books of Landry’s salary, or at least a part of it.

Though Landry himself has previously said that he would like to stay in Cleveland, where he has spent half of his career—four years—and in which he has become a locker room leader, he was also re-signed to the fact that the ball was in Cleveland’s court.

He has a base salary of $14.3 million, in addition to $750,000 in per-game roster bonuses and a $50,000 roster bonus. After factoring in the prorated portion of his signing bonus, the Browns could clear nearly $15 million in cap space by either trading or releasing him.

Of course, it should be noted that once they do get Cooper in the building, they could restructure his contract and reduce his $20 million salary substantially, depending upon how aggressive they are willing to be.

In other words, it remains a possibility that they can work out some deal that would reduce Landry’s 2022 cap hit and keep him on the roster along with Cooper, but that seems less likely. Earlier in the offseason, they did clear some cap space by turning $4 million of tackle Jack Conklin’s $12 million base salary into Not Likely To Be Earned Incentives, the trade-off being that they guaranteed the rest of the deal. Conklin is coming off of injury, as is Landry.