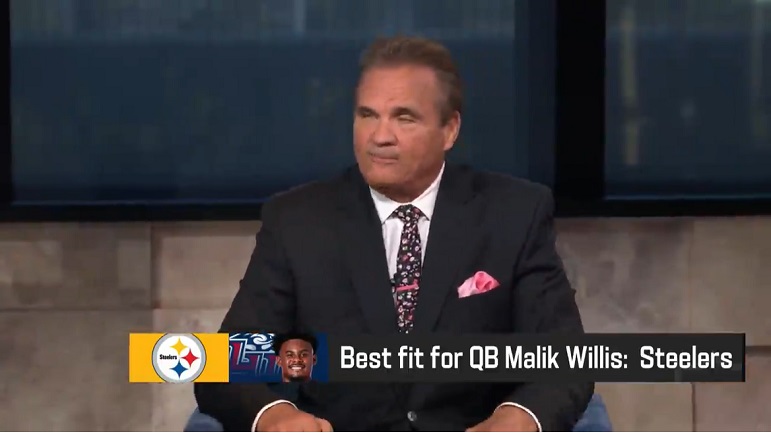 The 2022 NFL scouting Combine wrapped up on Sunday, and that means another significant portion of the pre-draft process has been completed. With those proceedings now done in Indianapolis, we can look forward to a lot of recaps of it from the major media heads, with a lot of them including trying to place certain prospects with certain NFL teams. Sunday night, Brian Baldinger of the NFL Network got a start on doing just that when it came to one of the top quarterbacks in this year’s draft class, Liberty’s Malik Willis.

“The guy I know that can push it down the field is Malik Willis,” Baldinger said right after the combine wrapped up on Sunday. “And what I have him matched up with is, I have a matched up with Pittsburgh Steelers with the 20th pick. I mean, they’re gonna lose a big strong-arm, Hall of Fame quarterback in Ben Roethlisberger. They gotta replace him. And I think the succession plan is Malik Willis.

“And when you watch him throw the ball, he’s got a power arm. That’s what we saw from Ben when he came out of Ohio almost 20 years ago. And it’s time to replace him. When you play in that AFC North, as you know, you gotta be able to push the ball through some crazy weather. In Cleveland, in Cincinnati, in Pittsburgh and Baltimore. And it seems like those are the quarterbacks that flourish in that division.”

I don’t think Baldinger is breaking any new ground here with him linking Willis to the Pittsburgh Steelers, as that’s been done quite a bit so far this offseason, especially since the Senior Bowl took place nearly a full month ago. With the combine now done and over with, I suspect we’ll continue to see Willis linked to the Steelers as a potential first-round draft pick at 20th overall, as the Liberty product did nothing to hurt his stock while in Indianapolis.

While it’s fine to link Willis to the Steelers, the big issue is whether or not he will actually fall to them in the first round. Most draftniks and fans don’t believe that Willis will fall that far, and thus think that the Steelers will need to trade up into the top 10 to select him if they covet him highly. Moving up 10 spots could possibly cost the Steelers their 2023 first-round draft pick as part of a deal.

The Liberty Pro Day is scheduled to take place on March 22, and we should probably expect Steelers general manager Kevin Colbert and head coach Mike Tomlin to both be in attendance for it. If they do both attend, speculation will grow even more that the team will be looking to draft Willis in the first round, and potentially even move up to do so. As Baldinger, he seems really convinced that Willis is destined to be a member of the Steelers.

“And I think Malik Willis is a good fit and I think he’s got a great upside and I think Najee Harris is gonna love the fact that he has that ability to take off with it as well,” Baldinger said Sunday night.