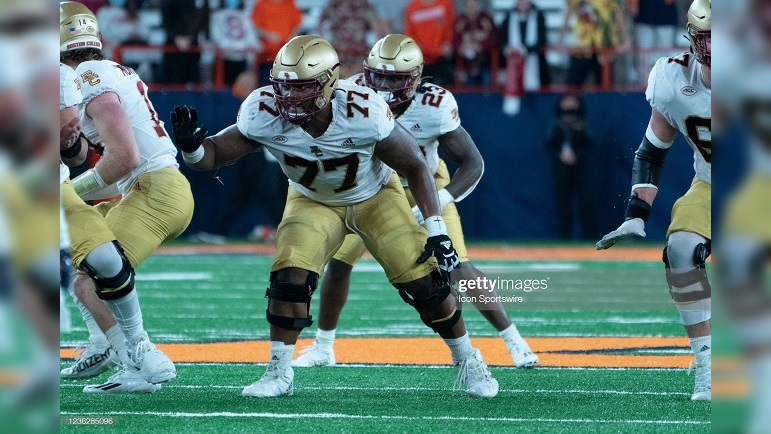 Boston College offensive lineman Zion Johnson hasn’t had a formal meeting with the Pittsburgh Steelers at this year’s Combine. For a Steelers’ team starving for O-line help, that may seem a little unusual. But there may not be na need for another face-to-face with him. Pittsburgh seems to have gotten to know him pretty well during this year’s Senior Bowl.

Speaking at Thursday’s Combine, Johnson told our Jonathan Heitritter he met with the Steelers a whopping five times at last month’s Senior Bowl.

Zion Johnson hasn't had a formal interview with Pittsburgh at the Combine, but mentioned he talked to them FIVE times at the Senior Bowl: both formal and informal. #Steelers

According to Heitritter, those five meetings include formal and informal meetings. Multiple meetings are common. Scouts usually hand players a card with basic information on it early in the week with a sit-down interview with the organization later on. But five is a lot of time to spend with one guy.

The two sides have a lot in common. Johnson grew up a Steelers’ fan and his O-line coach at Boston College in 2019 was Steve Addazio, who coached Maurkice Pouncey at Florida. Pittsburgh is likely to add O-line help this offseason given the group’s 2021 struggles and pending free agent status of names like Trai Turner and Chukwuma Okorafor.

In our scouting report, we conclude Johnson’s game by writing:

“Overall, Johnson is a plus run blocker who should do well in a man-blocking scheme. But he has enough athleticism to play in zone schemes too. His pass protection isn’t ideal but it’s fixable with improvements to his technique. Important to remember the guy got a late start to his football career and his best is ahead of him.”

Johnson was one of the Senior Bowl’s standout players, displaying his strength and versatility while even picking up center on the fly and performing well. Johnson is a potential first-round selection, with several draft analysts believing he’ll be selected late on Day 1. With a continued strong pre-draft process, it’s certainly possible Johnson will be on the Steelers’ shortlist at pick #20.

Check out our full report on him below.