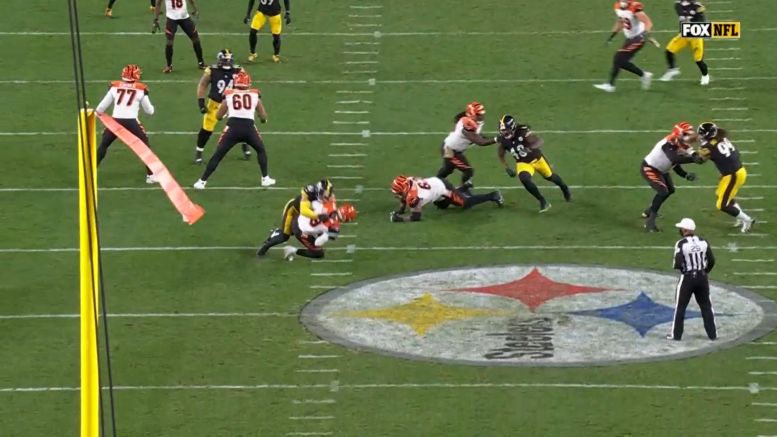 The Cincinnati Bengals, by and large, have done a good job of building their roster over the course of the past two offseasons, utilizing both the NFL Draft and free agency to do so. They turned a 2-14 team into a 10-7 Super Bowl contender in that short amount of time, with the help of some premium capital in both areas, but one spot on the roster that has been singled out as a weakness, routinely, is the offensive line.

While the front office will surely be looking to upgrade this offseason—we have already talked about reports that they are interested in Baltimore Ravens free agent interior lineman Bradley Bozeman—director of player personnel Duke Tobin went to bat for the guys already on the roster speaking about the position yesterday at the Combine.

“I know it’s a big story, I know they’ve taken some heat but I’ll just give you some data points that I think are worth considering”, he said, via Geoff Hobson of the team’s website. “We had two receivers go for over a 1,000 and a third get close. We had a running back go for over 1,000 yards, our quarterback was (second) in the league in passer rating, we’re a top-10 scoring team and I think we’re a top-10 yards per play team.

“The five guys up front, that’s all on them too. There’s a lot more to it than just the sack numbers”, he went on. “We weren’t the only ones to get sacked by Tennessee, Oakland, Kansas City and especially the Rams. Those guys did a lot of good work this year but in terms of analysis and whether we can improve, we’re obviously going to look to improve but it’s not just that position”.

Joe Burrow was sacked 51 times during the regular season, and another 19 times during their postseason run, for a total of 70 sacks, among the highest single-season totals ever taken by a single player in NFL history.

In case you’re wondering, only two of those 70 sacks came against the Pittsburgh Steelers in two games. They did not bring him down at all during the first meeting between the two teams, which ended Pittsburgh’s NFL record for the most consecutive games with at least one sack in history. They did sack him twice in the second game, which was otherwise a blowout loss, Cameron Heyward and Chris Wormley doing the honors.

When your starting lineup includes Quinton Spain as an intended starter, though, you know there is room to upgrade. There isn’t a position along that offensive line that the Bengals can’t conceivably find a clear upgrade from this offseason, and it wouldn’t at all be surprising if there are at least two new starters in 2022.

But you can’t fault an executive or coach for defending the players on the roster. You have nothing to gain by trashing your own linemen—you certainly won’t gain their support, or the support of their teammates, by doing so.