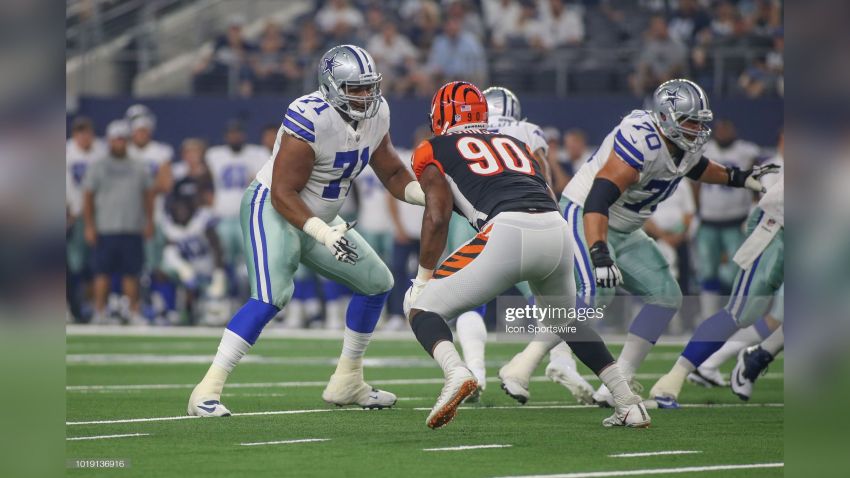 The Cincinnati Bengals had not won a postseason game in three decades before this past season, and they made it all the way to the Super Bowl, holding a fourth quarter lead, even, before ultimately giving way to Matthew Stafford, Cooper Kupp, and the Los Angeles Rams’ offense.

The biggest thing holding them back, arguably, was the mixed-bag performance of their offensive line, and they have attacked that aggressively this offseason. They agreed to terms on two new starters before the official start of the new league year in interior linemen Ted Karras and Alex Cappa. The Bengals added a third new starter this weekend.

After attempting to move him via trade, the Dallas Cowboys elected to release right tackle La’el Collins, designating him as a post-June release. While he intended to take a number of free-agent visits, it appears that he ultimately never left the city once he got to Cincinnati.

The deal is reportedly three years at $30 million on paper, but is said to be more accurately a two-year, $22 million deal, with the third year tacked on for salary cap purposes, according to Adam Schefter for ESPN. Exact figures are not yet available.

Collins told reporters that quarterback Joe Burrow had been texting him hoping that he would sign. His final message before doing so simply said, “Done deal?”. His response: “I was like, ‘Yeah, your new bodyguard is in town. Nobody is touching you’”.

Collins will take over at a right tackle position operated last season by veteran Riley Reiff, who is himself a free agent, and coming off of an injury. Karras will start at center after the team released Trey Hopkins, and Cappa will play at right guard.

The offensive line could get a fourth new starter assuming that 2021 second-round draft pick Jackson Carman emerges and takes control of the left guard position. The only 2021 starter that would remain is Jonah Williams at left tackle, who was head coach Zac Taylor’s first draft selection in 2019.

The Bengals allowed 70 sacks last season against Burrow, 19 of which came during the team’s four-game postseason run. He was sacked a total of nine times during the Super Bowl, and nine times in the Divisional Round win over the Tennessee Titans.

There was only one game during the regular season in which he did not take a sack—the first game against the Pittsburgh Steelers when both T.J. Watt and Alex Highsmith were injured. He was sacked at least five times in five games, though never as much as in the two postseason games referenced.