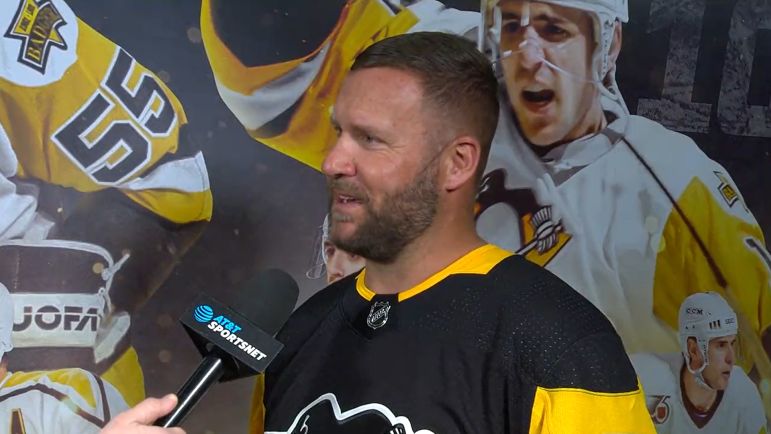 During the season, Bensday would ordinarily be today—that is, Wednesday—but the Pittsburgh Penguins took the opportunity to last night to honor former Pittsburgh Steelers quarterback Ben Roethlisberger last night, during his first significant public appearance since announcing his retirement earlier this offseason.

Penguins players donned no. 7 Roethlisberger jerseys as they skated during warm-ups, which the former No. 7 said he didn’t realize at first. He said during an interview last night that he at first thought there was a No. 7 on the Penguins roster—before seeing numerous other jerseys with the same number, and his name on the back.

The 40-year-old spent 19 seasons quarterbacking for the Steelers, starting 247 regular-season games from the time he was drafted in 2004 through the 2021 season. He won 165 regular-season games, with another 13 in the postseason, which included three wins in the AFC Championship game and two in the Super Bowl. Now his preparations include making lunches and driving his children to school.

Roethlisberger was asked by Dan Potash if he feels like he can finally take a deep breath and relax knowing that, for once in several decades, he’s not preparing for a grueling football season. He joked that it’s harder to be his wife’s personal assistant, but expressed appreciation for the opportunity to do the little things with his family instead.

“That’s fun stuff that I’ve really enjoyed”, he said about performing the domestic duties of being a father and husband, “and it doesn’t feel much different yet. I’m sure when training camp rolls around, my body’s gonna want to get out there, but right now I’m enjoying it”.

Now, let’s nip this in the bud—nobody should be interpreting this as a hint that Roethlisberger is dropping about potentially unretiring and playing again this season. Even if he wanted to, frankly, the Steelers almost surely would not look to re-sign him, and he’s not going to play somewhere else. There will be no Brett Favre moment.

Still, it is an earnest expression of the transition many players face as they move from such a dominant phase of their life, a profession that draws so much, physically and mentally, of their attention for so long, to suddenly being without it, while being exposed to it so publicly, and seeing your former coworkers going about their business without you.

His body may be hungry for football around late July, but it’ll be singing a different tune by early November, relieved not to be taking a beating. He was reportedly telling teammates well before last season even started that this year would be his last. He knew this was it. He knew he was done. He’s not coming back, no matter how in shape a radio personality may feel he looked in a hockey jersey.