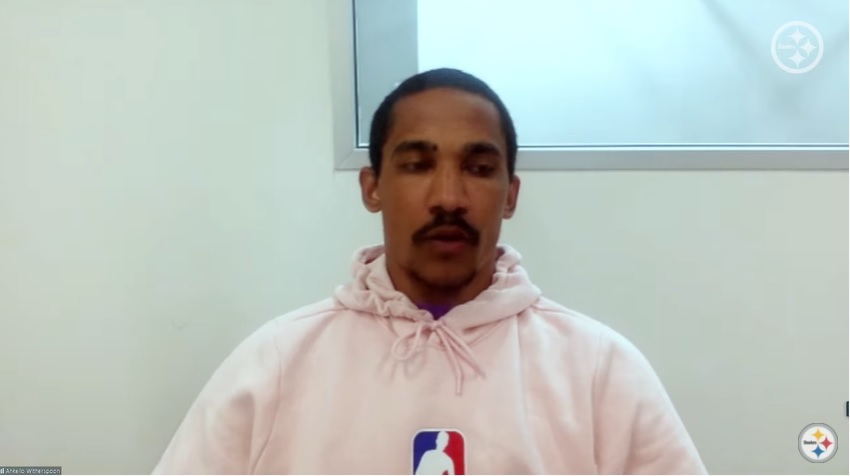 No player likes to sit on the bench. And I’m not even talking about in a jersey, as a backup, and still playing a little bit, if even only on special teams. For eight of the Pittsburgh Steelers’ first nine games last season, CB Ahkello Witherspoon was inactive. No jersey, just street clothes. The only game he suited up for came in Week 2 against the Las Vegas Raiders. He logged four defensive snaps, one of which ended up in a long Raiders’ touchdown. So when he was remembered, it was for all the wrong reasons (though Minkah Fitzpatrick was ultimately the man to blame on the play).

So it’s easy to understand why Witherspoon’s confidence would be low. And confidence for a cornerback is everything. But speaking to the media Monday, fresh off his two-year deal to remain with the team, Witherspoon described how he kept his spirits high.

The biggest thing in this league is the most important opportunity is the next one,” he said via the team’s YouTube channel. “So if you spend time, thinking about or worrying about what that’s gonna be you’re wasting valuable minutes on preparing and being ready for that moment. And that’s all I did was really just sit back, trusted the people that were in front of me, the, the, the leaders that were ahead of me like Mike Tomlin and I just listened and took it in stride. And when that opportunity came, I was just kind of prepared for it because I wasn’t taking myself through that mental, jungle gym for no reason. So I was just very even-keeled and ready to ready to take advantage of the opportunity.”

Take advantage he did. Witherspoon cracked the defensive rotation by Week 11 and saw an increased role the rest of the season. He finished the season leading the Steelers with three interceptions, the most he’s had in a single-season college or pro. Turning into the team’s best man coverage corner with height, length, and speed, he was a key re-signing by the Steelers. Witherspoon credited a good scheme and Mike Tomlin that influenced his desire to return.

“The injury to Joe Haden kind of opened up the door. That was kind of where my, where my spot was throughout the entirety of  beginning of the season, I spoke with Mike Tomlin and he was very honest about where we stood and what it was gonna take for me to get on the field that happened. And then it was just up to me to take advantage of the opportunity.”

Tomlin told him it’d take an injury to Haden get on the field. True to his word, when Haden missed a month with a foot sprain, Witherspoon became next man up. And he ran with the chance, earning a pretty payday this offseason. He’ll have a chance to build on that with Pittsburgh in 2022.